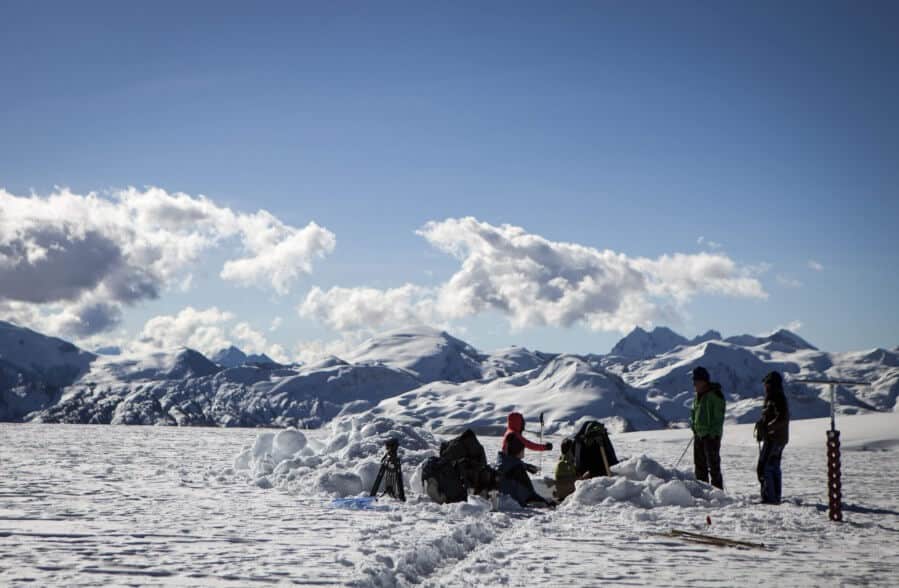 The ice fields on Quelccaya in Peru shrank by 46 percent from 1976, when teams from Ohio State first took ice samples from the glacier, to 2020.

Mountaintop glacier ice in the tropics of all four hemispheres covers significantly less area — in one case as much as 93% less — than it did just 50 years ago, a new study has found.

The study, published online recently in the journal Global and Planetary Change, found that a glacier near Puncak Jaya, in Papua New Guinea, lost about 93% of its ice over a 38-year period from 1980 to 2018. Between 1986 and 2019 the area covered by glaciers on top of Kilimanjaro in Africa decreased by nearly 75%.

The study is the first to combine NASA satellite imagery with data from ice cores drilled during field expeditions on tropical glaciers around the world. That combination shows that climate change is causing these glaciers, which have long been sources of water for nearby communities, to disappear and indicates that those glaciers have lost ice more quickly in recent years.

The two datasets allowed the researchers to quantify exactly how much ice has been lost from glaciers in the tropics. Those glaciers are “the canaries in the coal mines,” said Lonnie Thompson, lead author of the study, distinguished university professor of Earth Sciences at The Ohio State University and senior research scientist at Ohio State’s Byrd Polar and Climate Research Center.

“These are in the most remote parts of our planet–they’re not next to big cities, so you don’t have a local pollution effect,” Thompson said. “These glaciers are sentinels, they’re early warning systems for the planet, and they all are saying the same thing.”

The study compared changes in the area covered by glaciers in four regions: Kilimanjaro in Tanzania, the Andes in Peru and Bolivia, the Tibetan Plateau and the Himalayas of Central and South Asia, and ice fields in Papua, New Guinea, Indonesia. Thompson has led expeditions to all these glaciers and recovered ice cores from each. The cores are long columns of ice that act as timelines of s

orts for the regions’ climates over centuries to millennia. As snow falls on a glacier each year, it is buried and compressed to form ice layers that trap and preserve the chemistry of snow and whatever is in the atmosphere, including pollutants and biological material such as plants and pollen. Researchers can study those layers and determine what was in the air at the time the ice formed.

One image taken in 2019 of the top of Huascarán, the highest tropical mountain in the world, shows ice retreating upslope and exposing the rock beneath. Analyses performed by researchers at the University of Colorado showed that the area of the glacier ice on top of that mountain decreased by nearly 19% from 1970 to 2003. In 2020, the surface area of the Quelccaya Ice Cap, the second-largest glaciated area in the tropics, had decreased by 46% from 1976, the year Thompson drilled the first ice core from its summit.

Around the time of Thompson’s first expedition, NASA launched the first version of its Landsat mission. Landsat is a collection of satellites that photograph Earth’s surface and has been in operation in various forms since 1972. It offers the longest continuous space-based record of Earth’s land, ice and water.

“We are in this unique position where we have ice core records from these mountaintops, and Landsat has these detailed images of the glaciers, and if we combine those two data sets, we see clearly what is happening,” Thompson said.

Glaciers in the tropics respond more quickly to climate change and as they exist in the warmest areas of the world, they can survive only at very high altitudes where the climate is colder. Before Earth’s atmosphere warmed, the precipitation there fell as snow. Now, much of it falls as rain that causes the existing ice to melt even faster.

“You’re not sustaining the ice at the highest elevations anymore,” said co-author Christopher Shuman, associate research professor at the University of Maryland-Baltimore County and associate research scientist at NASA Goddard Space Flight Center in Maryland. “It’s this interplay between the warm air lower down melting away the margins of the ice fields while the very highest elevations are still cold enough to get a certain amount of snowfall, but not enough to sustain the ice cap to the dimensions it once was.”

That could have profound repercussions for people who live near those glaciers.

The study details the story of one community near the Quelccaya Ice Cap, and the aftermath of a flood caused by massive amounts of ice that fell from the glacier into a nearby glacial lake. The flood destroyed fields that one farming family had spent years cultivating and so frightened the family that they moved four hours away from the community to start a new life in the city.

In Papua New Guinea, the ice has cultural significance for many of the indigenous people who live near the ice fields, as they consider the ice to be the head of their god. Thompson believes the ice fields there will disappear entirely within two or three years.

It is too late for those glaciers, Thompson said, but not too late to attempt to slow the amount of carbon dioxide and other greenhouse gases emitted into the atmosphere, which are causing the planet to warm.

“The science doesn’t change the trajectory we’re on — regardless of how clear the science is, we need something to happen to change that trajectory,” he said.

Other Byrd Center researchers who collaborated on this study include Mary E. Davis, Ellen Mosley-Thompson, and Stacy Porter. Peruvian scientist Gustavo Valdivia Corrales contributed research from the Andes, and Compton J. Tucker of NASA collaborated on satellite imagery. Ice core drilling expeditions were supported by the National Science Foundation and the National Oceanic and Atmospheric Administration. Ethnographic fieldwork in Peru was supported in part by Johns Hopkins University.