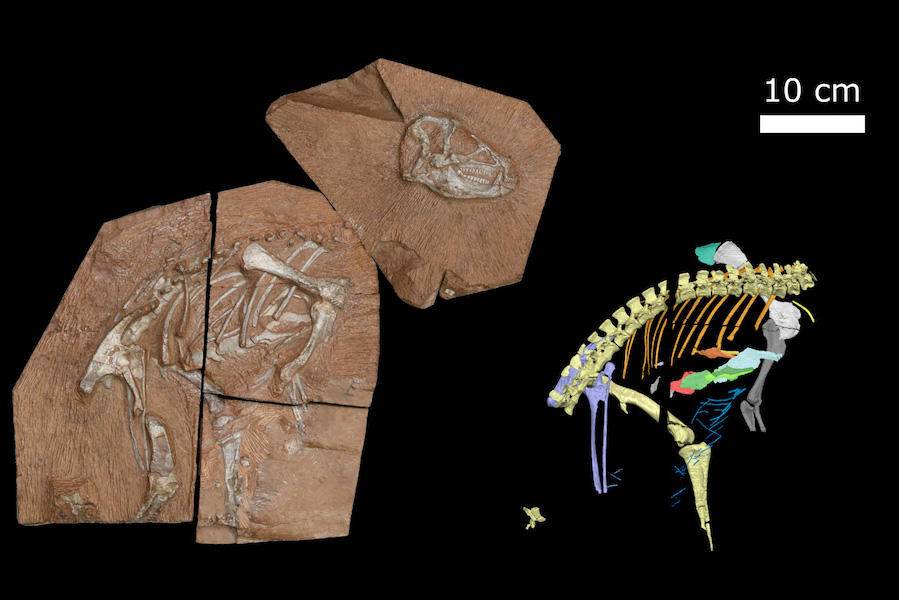 Using an exceptionally preserved fossil from South Africa, a particle accelerator, and high-powered x-rays, an international team including a University of Minnesota researcher has discovered that not all dinosaurs breathed in the same way. The findings give scientists more insight into how a major group of dinosaurs, including well-known creatures like the triceratops and stegosaurus, evolved.

The study is published in eLife, a peer-reviewed open access scientific journal for the biomedical and life sciences.

Not all animals use the same techniques and organs to breathe. Humans expand and contract their lungs. Birds have air sacs outside their lungs that pump oxygen in, and their lungs don’t actually move. For a long time, paleontologists assumed that all dinosaurs breathed like birds, since they had similar breathing anatomy. This study, however, found that Heterodontosaurus did not—it instead had paddle-shaped ribs and small, toothpick-like bones, and expanded both its chest and belly in order to breathe.

Heterodontosaurus is the oldest dinosaur in the Ornithischian line, one of three major dinosaur groups that includes Triceratops, Stegosaurus, and other duck-billed dinosaurs. The other groups are sauropods, or longnecks, and theropods like the T-Rex.

“We actually have never known how these [Ornithischians] breathed,” said Viktor Radermacher, lead author of the study and a Ph.D. student in the University of Minnesota’s Department of Earth and Environmental Sciences. “The interesting thing is that Heterodontosaurus is the ancestor of this group and it has these [newly discovered] pieces of anatomy, but its descendants don’t. What that means is that Heterodontosaurus is a missing link between the ancestors of dinosaurs and the bigger, charismatic species we know. This gives us a whole bunch of information and fills in some pretty glaring gaps in our knowledge of the biology of these dinosaurs.”

The researchers analyzed the new Heterodontosaurus specimen with high-powered x-rays generated from a synchrotron—a giant, donut-shaped particle accelerator that spins electrons at the speed of light—at the European Synchrotron Radiation Facility (ESRF) in France. Using those x-rays, they were able to digitally reconstruct the skeleton and identify the dinosaur’s unique features.

Heterodontosaurus lived in the early Jurassic period, about 200 million years ago, surviving an extinction at the end of the prior Triassic period. Understanding how this dinosaur breathed could also help paleontologists figure out what biological features allowed certain dinosaurs to survive or caused them to go extinct.

“The takeaway message is that there are many ways to breathe,” Radermacher said. “And the really interesting thing about life on Earth is that we all have different strategies to do the same thing, and we’ve just identified a new strategy of breathing. This shows that utilizing dinosaurs and paleontology, we can learn more about the diversity of animals on Earth and how they breathe.”

The research was funded by grants from South Africa’s National Research Foundation (NRF) and Department of Science and Technology (DST), the Palaeontological Scientific Trust, and the Durand Foundation for Evolutionary Biology and Phycology.