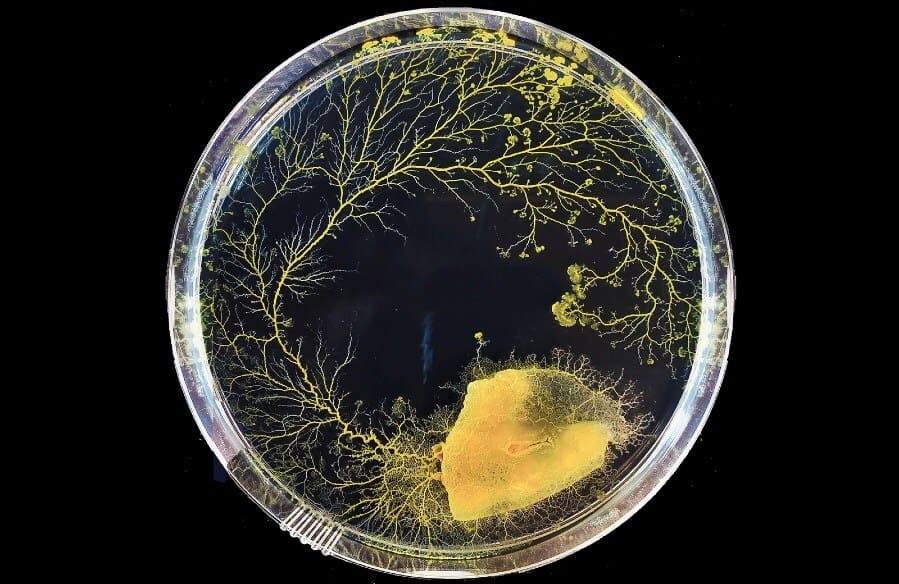 If you didn’t have a brain, could you still figure out where you were and navigate your surroundings? Thanks to new research on slime molds, the answer may be “yes.” Scientists from the Wyss Institute at Harvard University and the Allen Discovery Center at Tufts University have discovered that a brainless slime mold called Physarum polycephalum uses its body to sense mechanical cues in its surrounding environment, and performs computations similar to what we call “thinking” to decide in which direction to grow based on that information. Unlike previous studies with Physarum, these results were obtained without giving the organism any food or chemical signals to influence its behavior. The study is published in Advanced Materials.

“People are becoming more interested in Physarum because it doesn’t have a brain but it can still perform a lot of the behaviors that we associate with thinking, like solving mazes, learning new things, and predicting events,” said first author Nirosha Murugan, a former member of the Allen Discovery Center who is now an Assistant Professor at Algoma University in Ontario, Canada. “Figuring out how proto-intelligent life manages to do this type of computation gives us more insight into the underpinnings of animal cognition and behavior, including our own.”

Slimy action at a distance

Slime molds are amoeba-like organisms that can grow to be up to several feet long, and help break down decomposing matter in the environment like rotting logs, mulch, and dead leaves. A single Physarum creature consists of a membrane containing many cellular nuclei floating within a shared cytoplasm, creating a structure called a syncytium. Physarum moves by shuttling its watery cytoplasm back and forth throughout the entire length of its body in regular waves, a unique process known as shuttle streaming.

“With most animals, we can’t see what’s changing inside the brain as the animal makes decisions. Physarum offers a really exciting scientific opportunity because we can observe its decisions about where to move in real-time by watching how its shuttle streaming behavior changes,” said Murugan. While previous studies have shown that Physarum moves in response to chemicals and light, Murugan and her team wanted to know if it could make decisions about where to move based on physical cues in its environment alone.

The researchers placed Physarum specimens in the center of petri dishes coated with a semi-flexible agar gel and placed either one or three small glass discs next to each other atop the gel on opposite sides of each dish. They then allowed the organisms to grow freely in the dark over the course of 24 hours, and tracked their growth patterns. For the first 12 to 14 hours, the Physarum grew outwards evenly in all directions; after that, however, the specimens extended a long branch that grew directly over the surface of the gel toward the three-disc region 70% of the time. Remarkably, the Physarum chose to grow toward the greater mass without first physically exploring the area to confirm that it did indeed contain the larger object.

How did it accomplish this exploration of its surroundings before physically going there? The scientists were determined to find out.

The researchers experimented with several variables to see how they impacted Physarum’s growth decisions, and noticed something unusual: when they stacked the same three discs on top of each other, the organism seemed to lose its ability to distinguish between the three discs and the single disc. It grew toward both sides of the dish at roughly equal rates, despite the fact that the three stacked discs still had greater mass. Clearly, Physarum was using another factor beyond mass to decide where to grow.

To figure out the missing piece of the puzzle, the scientists used computer modeling to create a simulation of their experiment to explore how changing the mass of the discs would impact the amount of stress (force) and strain (deformation) applied to the semi-flexible gel and the attached growing Physarum. As they expected, larger masses increased the amount of strain, but the simulation revealed that the strain patterns the masses produced changed, depending on the arrangement of the discs.

“Imagine that you are driving on the highway at night and looking for a town to stop at. You see two different arrangements of light on the horizon: a single bright point, and a cluster of less-bright points. While the single point is brighter, the cluster of points lights up a wider area that is more likely to indicate a town, and so you head there,” said co-author Richard Novak, Ph.D., a Lead Staff Engineer at the Wyss Institute. “The patterns of light in this example are analogous to the patterns of mechanical strain produced by different arrangements of mass in our model. Our experiments confirmed that Physarumcan physically sense them and make decisions based on patterns rather than simply on signal intensity.”

The team’s research demonstrated that this brainless creature was not simply growing toward the heaviest thing it could sense – it was making a calculated decision about where to grow based on the relative patterns of strain it detected in its environment.

But how was it detecting these strain patterns? The scientists suspected it had to do with Physarum’s ability to rhythmically contract and tug on its substrate, because the pulsing and sensing of the resultant changes in substrate deformation allows the organism to gain information about its surroundings. Other animals have special channel proteins in their cell membranes called TRP-like proteins that detect stretching, and co-author and Wyss Institute Founding Director Donald Ingber, M.D., Ph.D had previously shown that one of these TRP proteins mediates mechanosensing in human cells. When the team created a potent TRP channel-blocking drug and applied it to Physarum, the organism lost its ability to distinguish between high and low masses, only selecting the high-mass region in 11% of the trials and selecting both high- and low-mass regions in 71% of trials.

“Our discovery of this slime mold’s use of biomechanics to probe and react to its surrounding environment underscores how early this ability evolved in living organisms, and how closely related intelligence, behavior, and morphogenesis are. In this organism, which grows out to interact with the world, its shape change is its behavior. Other research has shown that similar strategies are used by cells in more complex animals, including neurons, stem cells, and cancer cells. This work in Physarum offers a new model in which to explore the ways in which evolution uses physics to implement primitive cognition that drives form and function,” said corresponding author Mike Levin, Ph.D., a Wyss Associate Faculty member who is also the Vannevar Bush Chair and serves and Director of the Allen Discovery Center at Tufts University.

The research team is continuing its work on Physarum, including investigating at what point in time it makes the decision to switch its growth pattern from generalized sampling of its environment to directed growth toward a target. They are also exploring how other physical factors like acceleration and nutrient transport could affect Physarum’s growth and behavior.

“This study confirms once again that mechanical forces play as important a role in the control of cell behavior and development as chemicals and genes, and the process of mechanosensation uncovered in this simple brainless organism is amazingly similar to what is seen in all species, including humans,” said Ingber. “Thus, a deeper understanding how organisms use biomechanical information to make decisions will help us to better understand our our own bodies and brains, and perhaps even provide insight into new bioinspired forms of computation.”  Ingber is also the Judah Folkman Professor of Vascular Biology at Harvard Medical School and Boston Children’s Hospital, and Professor of Bioengineering at the Harvard John A. Paulson School of Engineering and Applied Sciences.