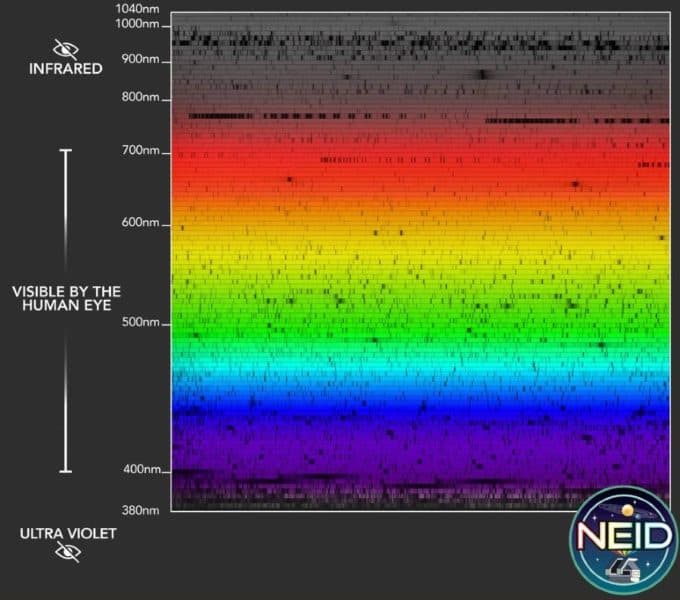 An image of NEID’s spectroscopic observations of the sun. NEID’s spectral coverage extends significantly redder and bluer than the limits of human vision, enabling it to observe many critical spectral lines. NEID’s design enables high spectral resolution, large wavelength coverage, and exquisite stability. The image is inspired by the classic image of the spectrum of the sun created by N.A. Sharpe, based on data obtained at the McMath Pierce Observatory, located at Kitt Peak, where NEID is also located. IMAGE: DANI ZEMBA, GUÐMUNDUR STEFÁNSSON, AND THE NEID TEAM

The NEID spectrometer, a new tool for the discovery of planets outside of our solar system, has now started its scientific mission at the WIYN 3.5m telescope at Kitt Peak National Observatory, Arizona.

“We are proud that NEID is available to the worldwide astronomical community for exoplanet discovery and characterization,” said Jason Wright, professor of astronomy and astrophysics at Penn State and NEID project scientist. “I can’t wait to see the results we and our colleagues around the world will produce over the next few years, from discovering new, rocky planets, to measuring the compositions of exoplanetary atmospheres, to measuring the shapes and orientations of planetary orbits, to characterization of the physical processes of these planets’ host stars.”

The newest and one of the most precise tools ever built to detect exoplanets, NEID will discover exoplanets by measuring the minute gravitational tug of these planets on their host star.

“We have reached an exciting milestone for NEID,” said Sarah Logsdon, a scientist at NSF’s NOIRLab and NEID instrument scientist. “After an extensive commissioning process, where NEID was put through its paces, NEID is embarking on its science mission, having demonstrated that it is indeed a state-of-the-art tool for studying planets outside of our solar system.”

The gravitational tug of orbiting planets induces a periodic velocity shift on the host star — a “wobble” that can be measured by NEID. Jupiter for example induces a 13 meter per second wobble on our sun, but the Earth induces a wobble of only about 9 centimeters per second. NEID’s single measurement precision is already better than 25 centimeters per second, enabling it to detect small wobbles with sufficient data.

“NEID represents the state of the art in Doppler spectroscopy radial velocity detection and characterization of exoplanets,” said John Callas, NN-EXPLORE project manager for NASA’s Exoplanet Exploration Program at the agency’s Jet Propulsion Laboratory (JPL). “NEID will push the existing boundaries for searching for smaller exoplanets, probing beyond the challenges that have limited past generations of RV spectrographs.”

Built as part of a joint NSF and NASA program, NEID’s mission is to enable some of the highest precision measurements currently possible, as well as to attempt to chart a path to the discovery of terrestrial planets around other stars.

“NEID has now successfully passed its final NASA review, and is in full operations as a scientific discovery tool,” said Fred Hearty, research professor at Penn State and project manager of NEID. “It was a real delight to work with this talented team, and a privilege to be a part of this group of professionals.”

The seething convection on the surface of stars, threaded by invisible lines of magnetic force and marred by ever changing active regions and “starspots” can pose a substantial challenge to NEID’s measurements. This stellar activity is one of the major impediments to enabling the detection of rocky planets like our own. For very small signals it is difficult to tell which are planets and which are just manifestations of stellar activity. However, the researchers added, there is one star for which we know the answer, because we know exactly how many planets orbit it — our sun. In addition to observing stars during the night, NEID will also look at the sun through a special smaller solar telescope that the team has developed.

“Thanks to the NEID solar telescope funded by the Heising-Simons Foundation, NEID won’t sit idle during the day,” said Eric Ford, professor of astronomy and astrophysics and director of Penn State’s Center for Exoplanets and Habitable Worlds. “Instead, it will carry out a second mission, collecting a unique dataset that will enhance the ability of machine learning algorithms to recognize the signals of low-mass planets during the nighttime.”

The solar telescope was designed and built by Andrea Lin, a Cecilia Payne-Gaposchkin Science Achievement Graduate Fellow in astronomy and astrophysics at Penn State, with Andy Monson, NEID’s systems engineer.

“The solar telescope was fun project to work on,” said Lin. “I look forward to using NEID for my doctoral dissertation research. One of my planned projects with NEID is to look for planets around K-dwarfs. These stars line up incredibly well with NEID’s capabilities, and the radial velocity method in general, so I’m hoping to discover some small — hopefully terrestrial! — planets around nearby K-stars.”

“The sun points the way,” said Suvrath Mahadevan, professor of astronomy and astrophysics at Penn State and principal investigator of NEID. “For decades the iconic, and now decommissioned, McMath Pierce telescope at Kitt Peak was the premier facility for studying the sun. NEID is now the bridge that connects exoplanet science to solar observations, the sun to the stars, and a bridge that connects Kitt Peak’s history to its present and future.”

All data from NEID’s observations of the sun are being immediately released publicly to enable researchers to begin to address the stellar activity problem. The NASA Exoplanet Science Institute (NExScI) at Caltech / IPAC coordinates the data processing and will make the data available through the NEID science archive.

“NEID has been the incredible story of a team that has delivered, in record time of a little over four years that include seven months of stoppage for COVID and then working through the height of this pandemic, an instrument that sets a new standard and will produce breakthrough science,” said WIYN Executive Director Jayadev Rajagopal.

The NEID instrument is funded by the joint NASA/NSF Exoplanet Observation Research Program, NN-EXPLORE, managed by JPL, a division of Caltech in Pasadena, California. The 3.5-meter WIYN Telescope is a partnership among Indiana University, the University of Wisconsin, Penn State, the University of Missouri-Columbia, Purdue University, NOIRLab and NASA.

Additional information can be found at the NEID blog and the website for Penn State’s Center for Exoplanets and Habitable Worlds.