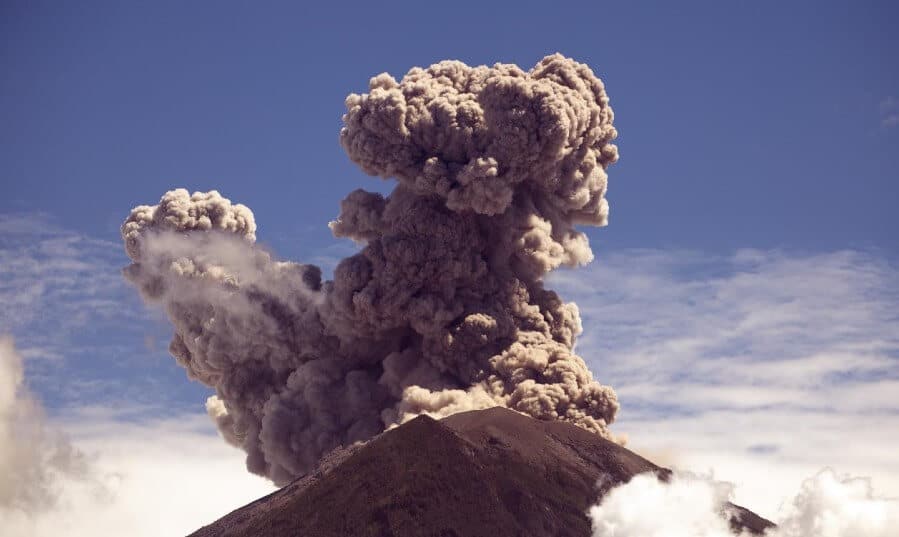 Agung, a volcano in Bali, had an explosive eruption in 2018.

We currently have a relatively good understanding of the surface reservoirs of carbon and the fluxes between them, but know much less about Earth’s interior carbon stores, which cycle carbon over millions of years

Their findings, published in Nature Communications, suggest that only about a third of the carbon recycled beneath volcanic chains returns to the surface via recycling, in contrast to previous theories that what goes down mostly comes back up.

One of the solutions to tackle climate change is to find ways to reduce the amount of CO2 in Earth’s atmosphere. By studying how carbon behaves in the deep Earth, which houses the majority of our planet’s carbon, scientists can better understand the entire lifecycle of carbon on Earth, and how it flows between the atmosphere, oceans and life at the surface.

The best-understood parts of the carbon cycle are at or near Earth’s surface, but deep carbon stores play a key role in maintaining the habitability of our planet by regulating atmospheric CO2 levels. “We currently have a relatively good understanding of the surface reservoirs of carbon and the fluxes between them, but know much less about Earth’s interior carbon stores, which cycle carbon over millions of years,” said lead author Stefan Farsang, who conducted the research while a PhD student at Cambridge’s Department of Earth Sciences.

There are a number of ways for carbon to be released back to the atmosphere (as CO2) but there is only one path in which it can return to the Earth’s interior: via plate subduction. Here, surface carbon, for instance in the form of seashells and micro-organisms which have locked atmospheric CO2 into their shells, is channelled into Earth’s interior. Scientists had thought that much of this carbon was then returned to the atmosphere as CO2 via emissions from volcanoes. But the new study reveals that chemical reactions taking place in rocks swallowed up at subduction zones trap carbon and send it deeper into Earth’s interior – stopping some of it coming back to Earth’s surface.

The team conducted a series of experiments at the European Synchrotron Radiation Facility, “The ESRF have world-leading facilities and the expertise that we needed to get our results,” said co-author Simon Redfern, Dean of the College of Science at NTU Singapore, “The facility can measure very low concentrations of these metals at the high pressure and temperature conditions of interest to us.” To replicate the high pressures and temperatures of subductions zones, they used a heated ‘diamond anvil’, in which extreme pressures are achieved by pressing two tiny diamond anvils against the sample.

The work supports growing evidence that carbonate rocks, which have the same chemical makeup as chalk, become less calcium-rich and more magnesium-rich when channelled deeper into the mantle. This chemical transformation makes carbonate less soluble – meaning it doesn’t get drawn into the fluids that supply volcanoes. Instead, the majority of the carbonate sinks deeper into the mantle where it may eventually become diamond.

“There is still a lot of research to be done in this field,” said Farsang. “In the future, we aim to refine our estimates by studying carbonate solubility in a wider temperature, pressure range and in several fluid compositions.”

The findings are also important for understanding the role of carbonate formation in our climate system more generally. “Our results show that these minerals are very stable and can certainly lock up CO2 from the atmosphere into solid mineral forms that could result in negative emissions,” said Redfern. The team have been looking into the use of similar methods for carbon capture, which moves atmospheric CO2 into storage in rocks and the oceans.

“These results will also help us understand better ways to lock carbon into the solid Earth, out of the atmosphere. If we can accelerate this process faster than nature handles it, it could prove a route to help solve the climate crisis,” said Redfern.

Adapted from a news release by the ESRF