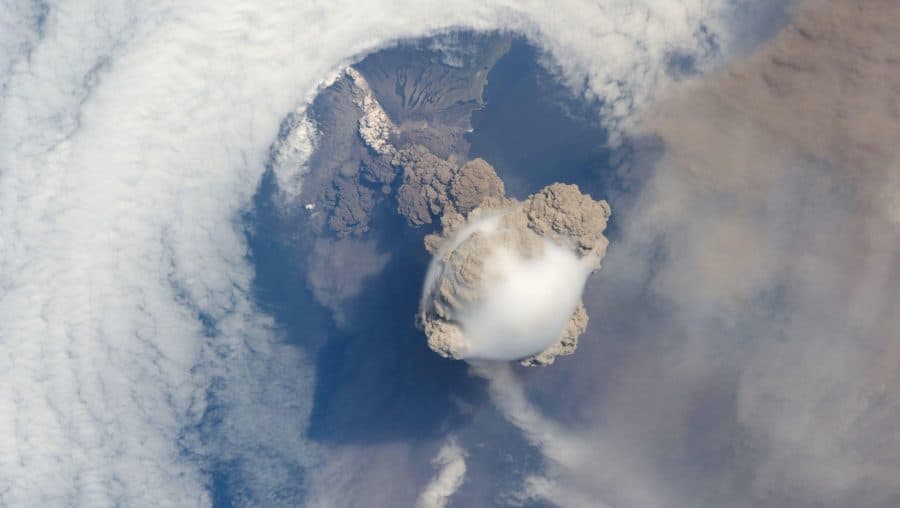 Researchers have shown that human-caused climate change will have important consequences for how volcanic gases interact with the atmosphere.

The researchers, from the University of Cambridge and the UK Met Office, say that large-magnitude eruptions will have greater effects as the climate continues to warm. However, the cooling effects of small- and medium-sized eruptions could shrink by as much as 75%. Since these smaller eruptions are far more frequent, further research is needed to determine whether the net effect will be additional warming or cooling.

Where and when a volcano erupts is not something that we can control, but as the atmosphere warms due to climate change, the plumes of ash and gas emitted by large, but infrequent, volcanic eruptions will rise ever higher. Climate change will also accelerate the transport of volcanic material – in the form of small, shiny droplets called volcanic sulfate aerosols – from the tropics to higher latitudes.

For large eruptions, the combined effect of these phenomena will cause the haze created by volcanic aerosols to block more sunlight from reaching Earth’s surface, ultimately amplifying the temporary cooling caused by volcanic eruptions. The results are reported in the journal Nature Communications.

When Mount Pinatubo in the Philippines erupted in 1991, the effects were felt worldwide. The plume from the eruption – the second largest of the 20th century – reached more than 30 kilometres into the sky, forming a layer of global haze. In 1992, this haze caused global temperatures to drop by as much as 0.5 degrees Celsius. In comparison, human activities have warmed global temperatures by over 1 degree Celsius since 1850. However, the effects of volcanic aerosols only persist for one or two years, while anthropogenic greenhouse gases will affect the climate for centuries.

“Beyond the data we have from recent eruptions like Pinatubo, we can also see the cooling effect of volcanoes going back two thousand years from the information contained in tree rings,” said Dr Thomas Aubry from Cambridge’s Department of Geography, the paper’s first author. “However, we wanted to look at the question from the opposite angle: how could a warming climate affect the cooling from volcanic eruptions?”

Volcanic plumes rise like hot air balloons: they keep rising to a height where they’re naturally buoyant. The Cambridge study looked at how high in the atmosphere these plumes can rise and be transported globally under different warming scenarios.

The researchers used global climate models combined with volcanic plume models to simulate how the aerosols emitted by volcanic eruptions might be affected by climate change.

They found that for large eruptions like Mount Pinatubo, which typically occur once or twice per century, climate change will cause the plumes to rise higher and the aerosols to spread faster over the globe, resulting in a cooling effect amplified by 15%. Changes in ocean temperatures are expected to further amplify the cooling, and the melting of ice sheets is also projected to increase volcanic eruptions frequency and size in places such as Iceland.

However, for moderate-sized eruptions such as the 2011 Nabro eruption in Eritrea, which typically occur on a yearly basis, the effect will be reduced by about 75% under a high-end warming scenario. This is because the height of the tropopause – the boundary between the troposphere and the stratosphere above it – is predicted to increase, making it harder for volcanic plumes to reach the stratosphere. Aerosols from volcanic plumes confined to the troposphere are washed out by precipitation in a matter of weeks, making their climatic impacts relatively minor and much more localised.

“Climate change isn’t something that’s coming – it’s already here, as clearly demonstrated by this week’s IPCC report,” said co-author Dr Anja Schmidt, also from the Department of Geography. “The effects of climate change and some of the feedback loops it can cause are becoming more obvious now. But the climate system is complex: getting a grasp of all these feedback loops is critical to understanding our planet and making accurate climate projections.”

“The new feedback loops between climate and volcanic eruptions that we highlight in this work are currently unaccounted for by IPCC,” said Aubry, who is also a Junior Research Fellow at Sidney Sussex College. “It could shed new light on the evolution of future volcanic influences on climate. Even if volcanoes have a limited influence on climate compared to human greenhouse gas emissions, they are an important part of the system.”

“Due to more frequent and more intense wildfires, as well as other extreme events, the composition of the upper atmosphere is changing in front of our eyes, and so is our understanding of the consequences of these changes,” said Schmidt, who is also affiliated with the Yusuf Hamied Department of Chemistry. “As we continue to emit greenhouse gases, the way that volcanic emissions interact with the atmosphere will continue to change and it is important to quantify these interactions in order to fully understand climate variability.”

The authors hope to bring together more volcanologists and climate scientists to understand not only the mechanics behind volcanic plume rise and aerosol life cycle, but also how changes in eruption frequency and magnitude, driven by deglaciation and extreme precipitation, will shape the future climatic effects of volcanic eruptions.

The research was funded by the Royal Society, the European Union’s Horizon 2020 research and innovation programme, and the UK Natural Environment Research Council.