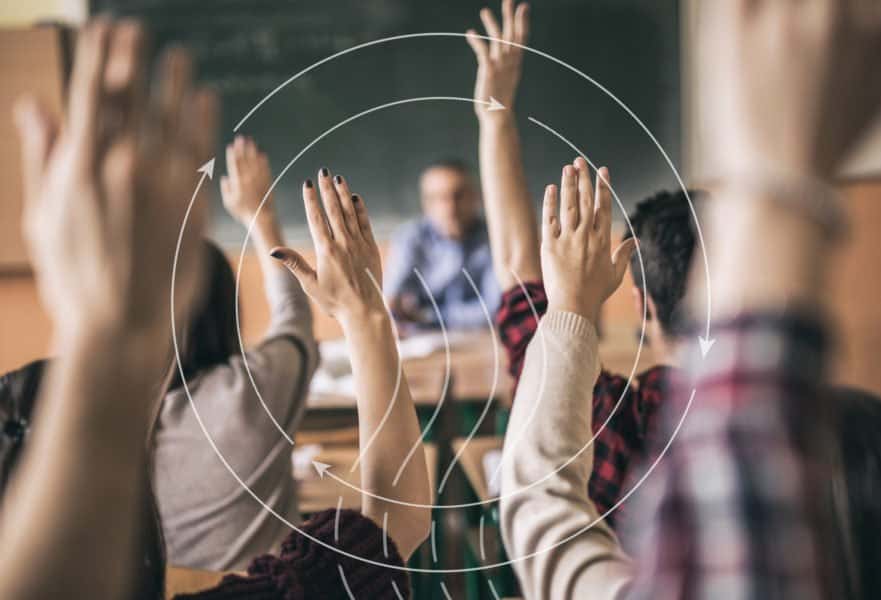 Open windows and a good heating, ventilation, and air conditioning (HVAC) system are starting points for keeping classrooms safe during the Covid-19 pandemic. But they are not the last word, according to a new study from researchers at MIT.

The study shows how specific classroom configurations may affect air quality and necessitate additional measures, beyond HVAC use or open windows, to reduce the spread of aerosols — those tiny, potentially Covid-carrying particles that can stay suspended in the air for hours.

“There are sets of conditions where we found clearly there’s a problem, and when you look at the predicted concentration of aerosols around other people in the room, in some cases it was much higher than what the [standard] models would say,” says Leon Glicksman, an MIT architecture and engineering professor who is co-author of a new paper detailing the research.

Indeed, the study shows that some circumstances can create a concentration of potentially problematic aerosols ranging from 50 to 150 percent higher than the standard baseline concentration that experts regard as “well-mixed” indoors air.

“It gets complicated, and it depends on the particular conditions of the room,” Glicksman adds.

The paper, “Patterns of SARS-CoV-2 aerosol spread in typical classrooms,” appears in advance online form in the journal Building and Environment. The authors are Gerhard K. Rencken and Emma K. Rutherford, MIT undergraduates who participated in the research through the Undergraduate Research Opportunities Program with support from the MIT Energy Initiative; Nikhilesh Ghanta, a graduate student at MIT’s Center for Computational Science and Engineering; John Kongoletos, a graduate student in the Building Technology Program at MIT and a fellow at MIT’s Tata Center; and Glicksman, the senior author and a professor of building technology and mechanical engineering at MIT who has been studying air circulation issues for decades.

The battle between vertical and horizontal

SARS-Cov-2, the virus that causes Covid-19, is largely transmitted in airborne fashion via aerosols, which people exhale, and which can remain in the air for long periods of time if a room is not well-ventilated. Many indoor settings with limited air flow, including classrooms, could thus contain a relatively higher concentration of aerosols, including those exhaled by infected individuals. HVAC systems and open windows can help create “well-mixed” conditions, but in certain scenarios, additional ventilation methods may be needed to minimize SARS-Cov-2 aerosols.

One ideal scenario involves fresh air entering a classroom near ground level and moving steadily higher, until it exits the room through ceiling vents. This process is aided by the fact that hot air rises, and people’s body warmth naturally generates rising “heat plumes,” which carry air toward ceiling vents, at the rate of about 0.15 meters per second.

Given ceiling ventilation, then, the aim is to create upward vertical air movement to cycle air out of the room, while limiting horizontal air movement, which spreads aerosols among seated students.

This is why wearing masks indoors makes sense: Masks limit the horizontal speed of exhaled aerosols, keeping those particles near heat plumes so the aerosols rise vertically, as the researchers observed in their simulations. Normal exhaling creates aerosol speeds of 1 meter per second, and coughing creates still higher speeds — but masks keep that speed low.

“If you wear well-fitting masks, you suppress the velocity of the [breath] exhaust to the point where the air that comes out is carried by the plumes above the individuals,” Glicksman says. “If it’s a loose-fitting mask or no mask at all, the air comes out at a high enough horizontal velocity that it does not get captured by these rising plumes, and rises at much lower rates.”

But even so, the researchers found, complications can emerge. In their set of simulations focused on closed windows and HVAC use, airflow problems emerged in a simulated classroom in winter, with cold windows on the side. In this case, because the cold air near the windows naturally sinks, it disrupts the overall upward flow of classroom air, despite people’s heat plumes.

“Because of the cold air from the window, some air moves down,” Glicksman says. “What we found in the simulations is, yes, a masked person’s heat plume would rise toward the ceiling, but if a person is close to the window, the aerosols get up to the ceiling and in some cases get captured by that downward flow, and brought down to the breathing level in the room. And we found the colder the window is, the larger this problem is.”

In this scenario, someone infected with Covid-19 sitting near a window would be particularly likely to spread their aerosols around. But there are fixes for this problem: Among other things, placing heaters near cold windows limits their impact on classroom airflow.

The researchers suggest a simple fix for this problem: installing window baffles, fittings that can be set to deflect the air downward. By doing this, the cooler fresh air from outside will enter the classroom near the feet of its occupants, and help generate a better overall circulation pattern.

“The advantage is, you bring the clean air in from outside to the floor, and then [by using baffles] you have something that starts to look like displacement ventilation, where again the warm air from individuals will draw the air upward, and it will move toward the ceiling,” Glicksman says. “And again that’s what we found when we did the simulations, the concentration of aerosol was much lower in those cases than if you just allow the air to come in directly horizontally.”

Alejandra Menchaca PhD ’12, a vice president and expert in building science and ventilation at the engineering consulting firm Thornton Thomasetti, calls the research a useful step forward. The paper “provides critical new insight into an aspect of indoor airflow exhaled aerosol dispersal,” says Menchaca, who was not involved in the research. “I hope the [building] industry is able to use these results to enhance its understanding of aerosol dispersal and key variables — many ignored until now — that influence it.”

In addition to the safety implications during the pandemic, Glicksman notes that better air flow in all classrooms has energy and environmental consequences.

If an HVAC system alone is not creating optimal conditions inside a classroom, the temptation might be to crank up the system full blast, in hopes of creating greater flow. But that is both expensive and environmentally taxing. An alternate approach is to look for classroom-specific solutions — like baffles or the use of high-efficiency filters in the recirculating HVAC air supply.

“The more outside air you bring in, the lower the average concentration of these aerosols will be,” Glicksman says. “But there’s an energy penalty associated with it.”

Glicksman also emphasizes that the current study examines air quality under specific circumstances. The research also took place before the more transmissible Delta variant of the Covid-19 virus became prevalent. This development, Glicksman observes, reinforces the importance of “reducing the aerosol concentration level through masking and higher ventilation rates” throughout a given classroom, and especially underscores that “the local concentration in the breathing zone [near the heads of room occupants] should be minimized.”

And Glicksman emphasizes that it would be useful to have more studies exploring the issues in depth.

“What we’ve done is a limited study for particular forms of geometry in the classroom,” Glicksman says. “It depends to some extent on what the particular conditions are. There is no one simple recipe for better airflow. What this really says is that we would like to see more research done.”