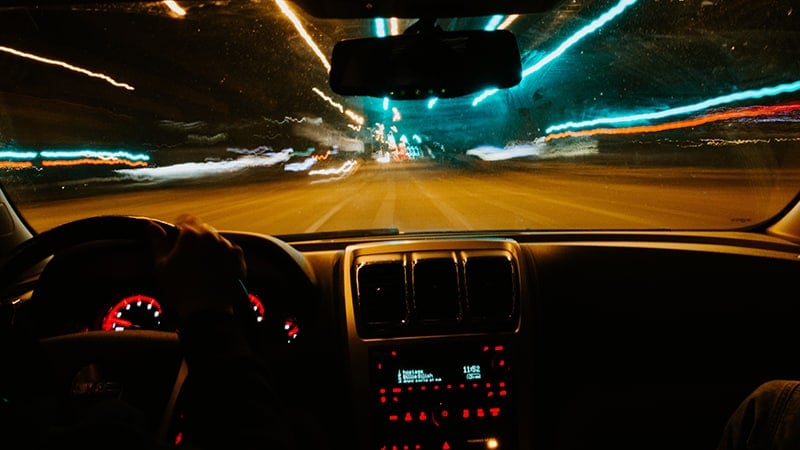 New research by Purdue University’s Tim Moore finds that a ban on teens driving at nighttime with multiple passengers more than halved crashes, casualties and deaths. The study examines the effects of a ban on carrying multiple passengers between 11 p.m. and 4:59 a.m. for first-year drivers under the age of 21. Photo: Unsplash, Gabe Pierce

­In most countries, traffic accidents are the leading cause of death for teenagers, with risky driving accounting for a large fraction of those deaths.

Driving restrictions have been implemented by many governments to reduce risks among teens, with varying degrees of success.

His National Bureau of Economic Research working paper, “Shaping the Habits of Teen Drivers,” examines the effects of a ban on carrying multiple passengers between 11 p.m. and 4:59 a.m. for first-year drivers under the age of 21.

Moore, an associate professor of economics at the Krannert School of Management and a Purdue University Research Center in Economics faculty affiliate, and co-author Todd Morris of the Max Planck Institute for Social Law and Social Policy estimate that the restriction reduced reported hospitalizations and fatalities by 58%, with 41 fewer hospitalizations, 98 fewer minor injuries and 164 fewer crashes with property damage per 100,000 first-year drivers.

The ban, implemented in July 2007 in the Australian state of New South Wales, is shown to be as effective as harsher restrictions that tend to discourage teens from getting licenses and starting to drive.

His study finds no evidence that the New South Wales restriction delays the development of driving skills, probably because it targets a very specific type of driving.

The ban also seems to have had persistent effects on driving behavior, unlike some other restrictions.

“We find significant reductions in nighttime multipassenger crashes in the second and third years of driving,” Moore said. “We see no differences beyond the third year, but by that time teens have become much safer drivers – their crash rates are one-fifth those of first-year drivers.”

Timing is important: The safety effects are more persistent among teens always subject to the restriction versus those who started driving before the restriction went into effect.

This paper adds to the literature on teen driving, which shows that while some restrictions reduce accidents, few lead to persistent behavioral changes. For example, speed-monitoring campaigns do not reduce accidents once they end, and ongoing cellphone texting bans decrease crashes for a month or two before returning to their original levels.

The findings by Moore and Morris suggest targeted policies that place limited restrictions on teens’ driving behavior, especially when implemented at the right time, can both improve safety and allow teens to develop driving skills.