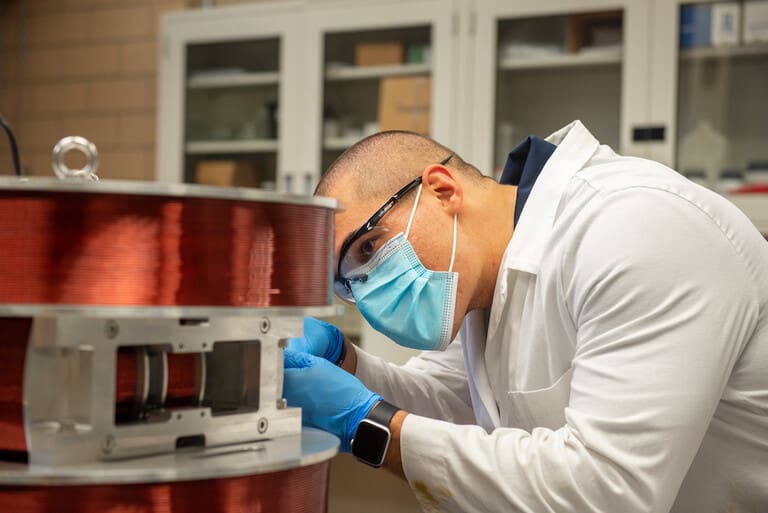 Arya Roessler, a master's student in aerospace engineering, places a sample inside a magnetic coil to align the nanotubes, the last step in the manufacturing process. IMAGE: KATE MYERS/PENN STATE

Commercial planes burn hundreds of gallons of jet fuel per hour of flight, which can be costly for both airlines and the environment. But if planes were made of carbon fiber reinforced plastic (CFRP) instead of the heavier material aluminum, they could go greater distances with less fuel.

Researchers in the Penn State College of Engineering have teamed up to investigate a new, low-cost CFRP manufacturing method with a $595,000 grant from the United States Office of Naval Research.

Currently, to produce CFRP aircraft parts, manufacturers apply heat and pressure to mold the material into a desired shape. This is done in a chamber, called an autoclave, that is sometimes large enough to fit an entire wing or fuselage. According to Namiko Yamamoto, principal investigator (PI) on the grant and associate professor of aerospace engineering, heating the massive autoclave can result in significant energy waste.

“The goal is to create CFRP parts without the use of the autoclave, which is expensive to heat for sustained periods at high temperatures,” Yamamoto said. “We will instead cure, or fuse together, the material inside a vacuum bag.”

In the new process, a liquid plastic and stacked sheets of carbon fiber are combined and cured in a vacuum bag. Carbon fibers provide strength and substance to the plastic.

“The trick to make it work is to use a lower viscosity, or thinner, liquid polymer, that can thoroughly penetrate into the fibers at a regular atmospheric pressure,” said Charles Bakis, co-PI on the grant and distinguished professor of engineering science and mechanics. “This is a new technique that people are interested in to eliminate the need for an autoclave and lower the cost of production.”

The researchers also will investigate inserting carbon nanotubes into the polymer mix before it fuses with the fibers, with the aim of strengthening the plastics and making them electrically conductive.

“The nanotubes are small enough to fit in the small spaces between the carbon fibers,” Bakis said.

“While we cure it, the magnetic field aligns the nanotubes so that they are all facing the same direction, and the goal is to fit the nanotubes perfectly between the carbon fibers,” Yamamoto said. “The nanotubes are so small that they provide reinforcement rather than acting as defects.”

The magnetic aligned nanotubes also enhance the material with electric conductivity, according to Bakis.

“Conductivity is important when a plane is struck by lightning — lightning strikes pass right through the plane without damaging it,” Bakis said.

Commercial airlines have a strong interest in the new, lightweight material, according to researchers, since it would reduce fuel consumption. With less fuel to carry, planes could increase their cargo weight allowances and transport more passengers and goods.

One example of this is the Boeing 787, which first took flight in 2009. It is made up of a similar CFRP, created in an autoclave, but is inferior to the material Yamamoto and Bakis propose, as it does not include the use of nanotubes.

The researchers will create test specimens of the plastic in their labs, Advanced Composites and Engineered Materials Group, headed by Yamamoto, and Composites Lab, headed by Bakis. Arya Roessler, a master’s student in aerospace engineering, will conduct much of the lab work as part of his degree requirements.

“Manufacturers can use simple equipment and devices, another aspect that reduces cost, as most industry teams already have a vacuum bag,” Bakis said. “This product, if manufactured commercially for use in car and plane bodies, should be able to reduce the cost for both companies and consumers.”