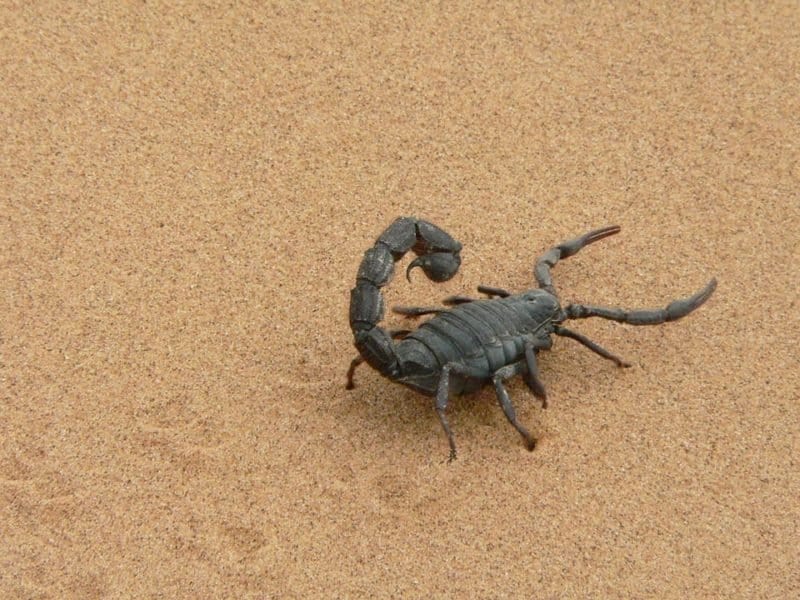 A scorpion’s sting tip and the mandibles and fangs that ants and spiders use to puncture prey are made of special materials that form tips and sharp edges. These tools enable them to cut and penetrate things that the limited forces of their small muscles won’t otherwise allow.

That knowledge won’t lessen the pain of puncture in human skin, but it may be useful in the design of precision cutting tools, said University of Oregon physicist Robert Schofield, lead author of a paper published in the Nature journal Scientific Reports.

In the paper, Schofield’s 19-member team detailed experiments done with miniaturized testing machines to explore the strong tools of small organisms including ants, bristle worms, scorpions and spiders. In all, the team performed about 1,500 hand-positioned measurements on 150 organisms from 10 different species from several phyla.

The heavy element biomaterials, as the research team labeled them, are zinc- and manganese-enriched. They make up a third class of structural biomaterials, after plain organic materials found in claws and fingernails and mineralized substances in teeth and bones, the researchers said.

“We found that, if these small organisms made their tools of the same organic material as other stiff parts of their exoskeletons, the sharp edges would deform more, they would not be as hard, and they would often wear away much faster,” Schofield said. “On the other hand, if they used the calcified material that human teeth are made from, their tools would be hard enough, but they wouldn’t be sharp enough because of the large crystal size.”

The heavy element biomaterials, Schofield said, create sharper, damage-resistant tools that allow scorpions to use about a fifth of the force relative to that for plain organic materials.

With their miniature testing machines and related techniques, Schofield and colleagues successfully measured the ability of the organisms’ puncturing tools to resist impact and fracture. They also obtained measurements on abrasion resistance and damping, or mechanical energy, properties of the materials.

They also used atom probe tomography to create 3-D maps with a resolution of better than seven nanometers of molecular fragments in the protein structures, as well as other precision instruments to disassemble the materials almost atom-by-atom to study their composition.

Because the spiders, ants and the other insects, worms, crustaceans and many other groups of organisms that use this class of biomaterials require less force, Schofield said, they can have smaller muscles and use less energy to obtain food.

“Human engineers might learn from this biological trick used by small organisms in developing their sharp fangs, stings and mandibles,” Schofield said. “The hardness of ant teeth, for example, increases from about the hardness of plastic to that of aluminum when zinc is added. While there are much harder engineering materials, they are often more brittle or ductile.”

Co-authors on the paper were 15 current and former undergraduate and graduate students from the UO and Lane Community College who worked in Schofield’s lab during the project. Additional co-authors were Arun Devaraj and X. Wang, both of the Pacific Northwest National Laboratory, and M. H. Nesson of Oregon State University’s Department of Biochemistry and Biophysics.

Technologies used in the National Science Foundation-supported research are in Center for Advanced Materials Characterization in Oregon, an UO-based facility known as CAMCOR, and the Environmental Molecular Sciences Laboratory at the Pacific Northwest National Laboratory in Richland, Washington.