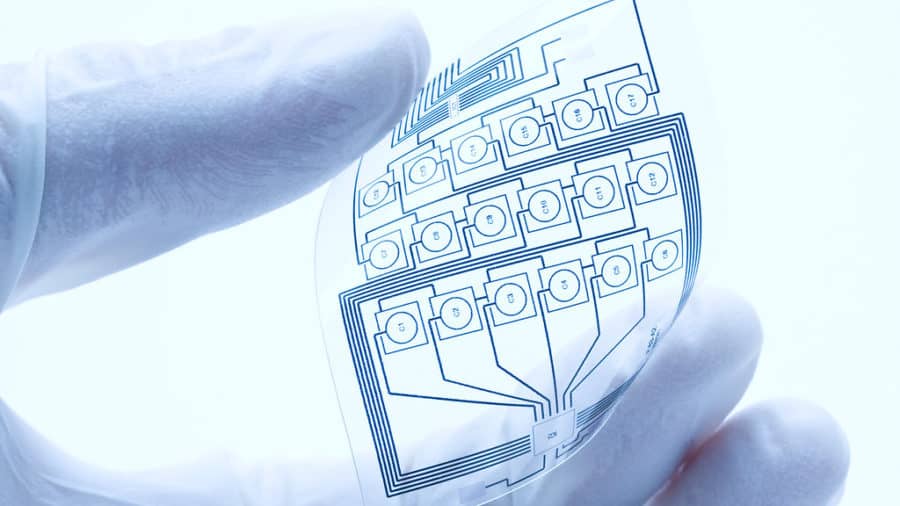 With its extremely thin single crystals, the Bath University superconductor shows promise as a component for flexible electronics.

Researchers at the University of Bath have found a way to make ‘single-crystal flake’ devices that are so thin and free of defects, they have the potential to outperform components used today in quantum computer circuits.

The study is published this month in the journal Nano Letters.

The team from the university’s Department of Physics made its discovery while exploring the junction between two layers of the superconductor niobium diselenide (NbSe₂) after these layers had been cleaved apart, twisted about 30 degrees with respect to one another, then stamped back together. In cleaving, twisting and recombining the two layers, the researchers were able to build a Superconducting Quantum Interferometer Device (SQUID) – an extremely sensitive sensor used to measure incredibly tiny magnetic fields.

SQUIDs have a wide range of important applications in areas that include healthcare (as seen in cardiology and magnetoencephalography – a test that maps brain function) and mineral exploration.

SQUIDS are also the building blocks of today’s commercial quantum computers – machines that perform certain computational tasks much more rapidly than classical computers. Quantum computing is still in its infancy but in the next decade, it is likely to transform the problem-solving capacity of companies and organisations across many sectors – for instance by fast-tracking the discovery of new drugs and materials.

“Due to their atomically perfect surfaces, which are almost entirely free of defects, we see potential for our crystalline flakes to play a significant role in building quantum computers of the future,” said Professor Simon Bending, who carried out the research together with his PhD student Liam Farrar. “Also, SQUIDs are ideal for studies in biology – for instance, they are now being used to trace the path of magnetically-labelled drugs through the intestine – so we’re very excited to see how our devices could be developed in this field too.”

As Professor Bending is quick to point out, however, his work on SQUIDs made using NbSe₂ flakes is very much at the start of its journey. “This is a completely new and unexplored approach to making SQUIDs and a lot of research will still have to done before these applications become a reality,” he said.

The flakes from which the Bath superconductors are fabricated are extremely thin single crystals (10,000 times thinner than a human hair) that bend easily, which also makes them suitable for incorporation into flexible electronics, as used in computer keyboards, optical displays, solar cells and various automotive components.

Because the bonds between layers of NbSe₂ are so weak, cleaved flakes – with their perfectly flat, defect-free surfaces – create atomically sharp interfaces when pushed back together again. This makes them excellent candidates for the components used in quantum computing.

While this is not the first time NbSe₂ layers have been stamped together to create a weak superconducting link, this is the first demonstration of quantum interference between two such junctions patterned in a pair of twisted flakes. This quantum interference has allowed the researchers to modulate the maximum supercurrent that can flow through their SQUIDs by applying a small magnetic field, creating an extremely sensitive field sensor. They were also able to show that the properties of their devices could be systematically tuned by varying the twist angle between the two flakes.