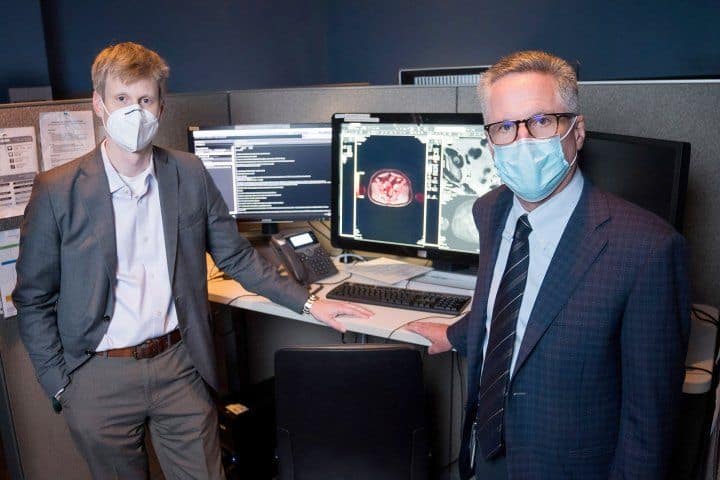 A revolutionary new diagnostic method for prostate cancer can detect prostate cancer cells that have spread to lymph nodes both inside and outside the pelvis, according to the UC San Francisco and UCLA team whose earlier work led to the test’s FDA approval.

The test, which is now available at UCSF and UCLA, makes cancer cells light up on positron emission tomography (PET) with a radioactive compound developed more than a decade ago in Germany. The method, known as PSMA PET imaging, should become more widely available as commercial firms enter the market.

“This is a game changer,” said Peter Carroll, MD, MPH, professor in the UCSF Department of Urology and a senior researcher for the study. “It will lead to more refined treatment for men with high-risk prostate cancer at the time of diagnosis, as well as for previously treated men whose cancers recur.”

The key to this improved PET imaging approach is an injectable formulation containing a small amount of Gallium 68 PSMA-11. Within the body the diagnostic agent attaches to a protein called the prostate-specific membrane antigen (PSMA), which is abundant on prostate cells that are cancerous, but not on normal tissue. Gallium 68 PSMA-11 emits positron particles detectible with PET imaging, highlighting tissue to which cancer has spread.

“A positive PET scan using this new diagnostic drug is a definite indicator that prostate cancer has spread to the lymph node, although a negative result does not exclude nodal spread,” said Thomas Hope, MD, an associate professor in the Department of Radiology at UCSF, who led the work with Jeremie Calais, MD, assistant professor in the Department of Molecular and Medical Pharmacology at UCLA. “Additional prospective clinical trials with the diagnostic drug in PET imaging are likely to lead to clearer indicators to help guide initial treatment choices.”

The study, published Sept. 16 in JAMA Oncology, found that PSMA PET imaging detected biopsy-confirmed spread of prostate cancer to nearby pelvic lymph nodes or other sites in 40 percent of cases. It also found that many sites of disease were outside of the pelvis.

This is a game changer. It will lead to more refined treatment for men with high-risk prostate cancer at the time of diagnosis, as well as for previously treated men whose cancers recur.

It is a major improvement over previous methods, such as CT or MRI, which had been unable to detect the cancer’s spread to lymph nodes.

Prostate cancer will be the most diagnosed cancer in men in 2021, according to the American Cancer Association. The new findings hold promise for more accurate non-invasive cancer staging and better treatment decisions, the UC researchers say. Treatment choices depend in part on whether cancer cells have begun to grow beyond the prostate.

A previous trial by the same team demonstrated that PSMA PET can reveal where in the body the prostate cancer is recurring when the recurrence has been indicated by rising levels of prostate specific antigen (PSA) in the blood. These sites can sometimes be treated with external beam radiation.

In 2020 the researchers used their data to gain approval for a rare academic sponsored new drug application (NDA) from the Food and Drug Administration (FDA). Gallium 68 PSMA-11 became the first FDA-approved diagnostic drug for use in prostate cancer staging and recurrence.

“Although the improved sensitivity of such imaging compared to standard methods has been shown with certainty, we need to assess whether this leads to improved long-term outcomes,” Carroll said. “From my early vantage point, I predict it will.”

The University of California, San Francisco (UCSF) is exclusively focused on the health sciences and is dedicated to promoting health worldwide through advanced biomedical research, graduate-level education in the life sciences and health professions, and excellence in patient care. UCSF Health, which serves as UCSF’s primary academic medical center, includes top-ranked specialty hospitals and other clinical programs, and has affiliations throughout the Bay Area.