The first published data from the Perseverance rover shows that there was a large, deep lake on Mars 3.6 billion years ago, and that it was swept away by a climate upheaval.

After years of preparation and the nerve-wracking take-off and landing phases, the publication of the very first results of a space mission is always a very special moment. Those of Perseverance, published today in the journal Science,1 are no exception: as we suspected, Jezero crater, the site 35 kilometers in diameter where the rover landed in February 2021, welcomed a real lake several billion years ago.

Confirming this hypothesis requires images of vertical surfaces such as cliffs, something that cannot be obtained using orbital observations, however invaluable they may be. Only a rover with on-board cameras can study them directly. NASA’s Mars 2020 mission, supported by an international team, initially set two major objectives for Perseverance.

“The mission’s goal is to use the rover to help us understand the geology and ancient climate of Mars, and to try to detect traces of past life which might still be preserved,” explains Nicolas Mangold, CNRS senior researcher at LPG.2 “To do this, Perseverance has to sample rocks of various types and ages.” The rover is therefore focusing on sedimentary rocks formed in the presence (or not) of water and on older samples of crust, such as those found in the Gale crater, currently being explored by the Curiosity rover.

Perseverance will also have to select some forty samples, which will be the first ever brought back to Earth. This unprecedented return will be carried out by two other US / European collaborative missions, still under development and planned for the early 2030s.

A lake fed by a river

In the meantime, Perseverance is hard at work. Its first scientific results have just been published in the prestigious journal Science, with Mangold as lead author.3 The findings first of all confirm that, around 3.6 billion years ago, the Jezero crater really was a lake fed by a river flowing through a delta. The circular body of water covered an area 35 kilometres in diameter and was several tens of metres deep. 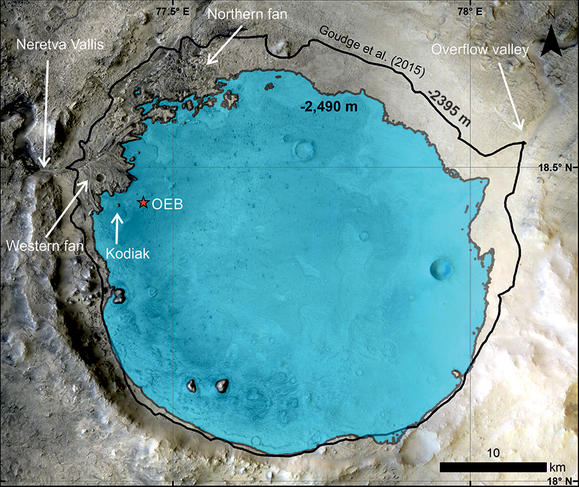 This in-situ validation of orbital data is no mean feat. (For instance, the Spirit rover, which arrived on Mars in 2004, never managed to prove that its landing site, the Gusev crater, was an ancient lake.) On top of that, Perseverance showed that, in the fluvial deposits at the top of the delta, large boulders and cobbles, over a metre wide, had been displaced. This can only happen when there is a very high river flow rate.

“This observation strongly suggests that there was an abrupt hydrological change, linked to a climate transition that heralded the disappearance of the lake,” Mangold explains. “This could be explained by cooling due to a glacier or to increasingly arid conditions. In fact, on Earth, certain deserts undergo episodes of flash floods which appear and disappear in just a few hours.”

These discoveries were only made possible by studying sedimentary strata on Kodiak Butte, located in the former delta. But although Perseverance landed two kilometres from its initial target, its seven on-board instruments still enabled it to operate remotely. SuperCam, its main instrument, is an impressive camera whose job is to observe and analyse rocks. It is operational even when analysing objects around ten centimetres in size located several kilometres from the rover. 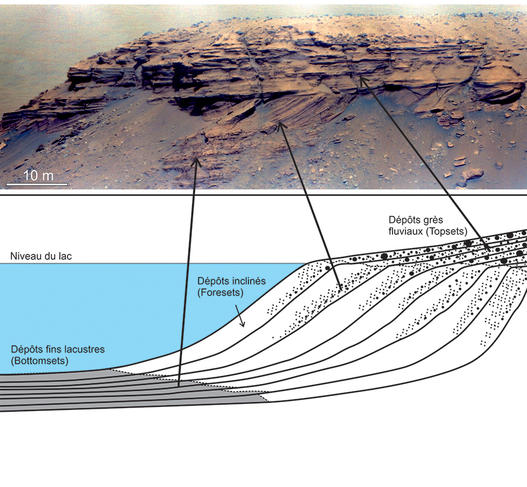 SuperCam image (top) of an escarpment of the residual Kodiak mound revealing an assemblage of sediment strata typical of fluvial deposits layered on the front of the delta. This shows where the river entered the deltaic lake as can be observed on Earth (bottom).
NASA/JPL-Caltech/LANL/CNES/CNRS/IRAP/LPG
Share

“SuperCam is unusual in that it brings together five different techniques,” explains Sylvestre Maurice, a researcher at IRAP4 and co-Principal Investigator for the camera. “One instrument provides information about the elemental chemical composition of the rocks, two others analyse their mineralogy, a camera takes high-quality remote images and, last but not least, a microphone succeeded in making the first recording of sounds on Mars. We had to juggle the requirements of each component to make them fit into a single instrument that is as innovative as it is complex.”

A rover with 20 cameras

Although SuperCam only provides a very narrow field of view, Perseverance is armed with twenty or so cameras altogether, including Mastcam-Z, which also helped to obtain these first results. All this material has to survive the launch, the journey to Mars, the landing and the conditions on the planet, where the day / night cycles are accompanied by abrupt changes in temperature. The French teams were able to rely on their expertise since they had previously developed a similar although simpler instrument, ChemCam, used on the Curiosity rover, which has now been on Mars for nine years. 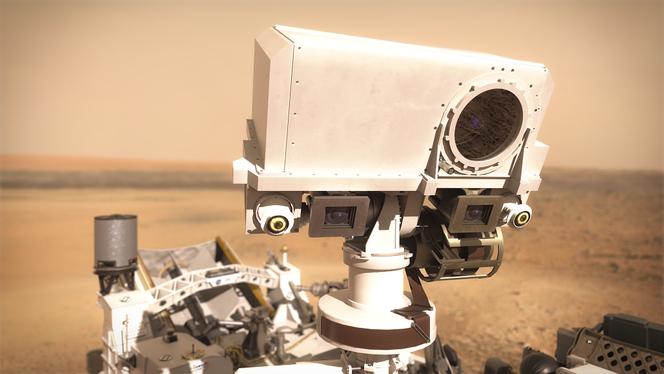 In France, around 300 people worked on SuperCam under the supervision of the French space agency CNES.5 “We are continuing France’s strong commitment to Mars surface missions,” Maurice says. “The French scientific community is heavily involved in the Insight mission, for which it provided the seismometer, and in the European ExoMars mission, scheduled for launch in September 2022.”

“Of course, it’s reassuring that we have already found what we were looking for, but this kind of result always raises more questions than it answers,” Mangold points out. “On the basis of these findings, we plan to take Perseverance across the former delta to undertake a detailed analysis of the strata observed, and in particular of the fluvial sediments located at the top, to try to understand the origin of the climate transition and analyse the large boulders that were probably transported from the ancient crust.”

The teams will therefore have to determine a route that will let the rover access all the geological layers in the Jezero crater. This may then reveal the environment in which water entered the delta before flowing into the lake. But for now, Perseverance can take a break. As happens every two years, Mars is on the opposite side of the Sun from the Earth, cutting off all communication for three weeks.