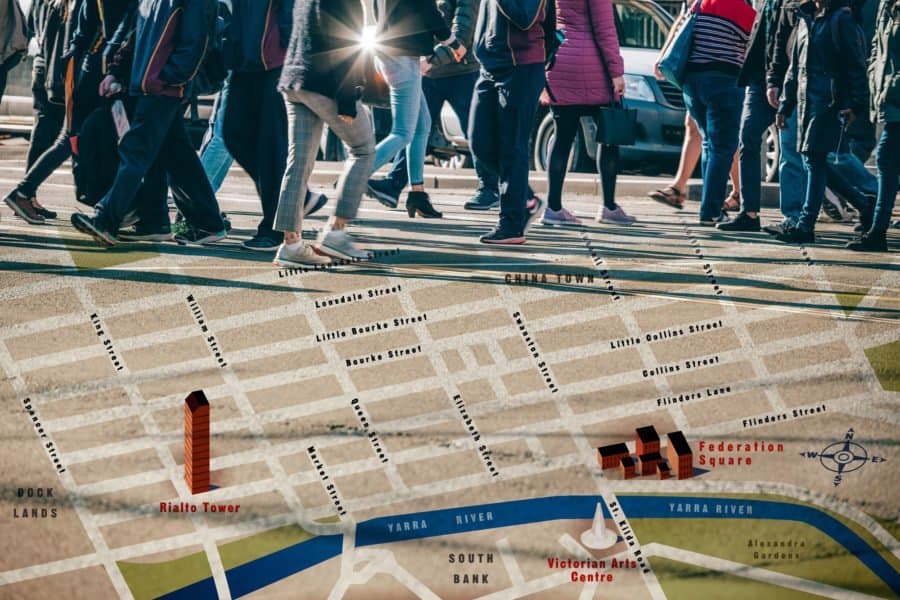 When urban development takes place, a traffic impact assessment is often needed before a project is approved: What will happen to auto traffic if a new apartment building or business complex is constructed, or if a road is widened? On the other hand, new developments affect foot traffic as well — and yet few places study the effects of urban change on pedestrians.

A group of MIT researchers wants to alter that, by developing a model of pedestrian activity that planners and city officials can use in much the same way officials evaluate vehicle traffic. A study they have conducted of Melbourne, Australia, shows that the model works well when tested against some of the most comprehensive pedestrian data available in the world.

“Our model can predict changes in pedestrian volume resulting from changes in the built environment and the spatial distribution of population, jobs, and business establishments,” says Andres Sevtsuk, an associate professor in MIT’s Department of Urban Studies and Planning (DUSP) and lead author of a newly published paper detailing the results. “This provides a framework to understand how new developments can affect pedestrian flows on city streets.”

The paper, “We shape our buildings, but do they then shape us? A longitudinal analysis of pedestrian flows and development activity in Melbourne,” appears in the journal PLoS ONE. The co-authors are Rounaq Basu, a PhD candidate in DUSP; Bahij Chancey MCP ’21, a researcher at the MIT City Form Lab; and Sevtsuk, who is the Charles and Ann Spaulding Career Development Associate Professor of Urban Science and Planning.

The MIT researchers first developed their model using pedestrian movements in Cambridge’s Kendall Square, home to MIT and many science and technology firms. The model uses individual buildings as trip origins and destinations, routing pedestrian journeys over sidewalk networks. Purpose-driven pedestrian trips linking transit stops, homes, offices, eateries, and other retail shops can vary during different times of a day. Rather than assuming that people take shortest paths, the model assumes people may walk any of the available routes, up to 15 percent longer than the shortest possible path.

To conduct the study, the MIT researchers used pedestrian counts during the morning and evening rush hours, and during lunch hours from a long-term data-collection project in Melbourne, the Pedestrian Counting System (PCS). Since 2014, city officials there have deployed automated sensors to monitor levels of foot traffic, currently in 92 locations throughout the downtown.

Of course, Melbourne has not remained static since 2014, with a shifting population and new buildings of varying kinds developed each year. The researchers used the city’s Census of Land Use and Employment (CLUE) to record changes at the level of individual buildings, while accounting for population and local work force levels, the number of students at local universities, and even weather patterns (there are consistently fewer pedestrians on rainy days).

Additionally, the long-term nature of the Melbourne data collection means the researchers could test their model on an iterative basis. Using data from a particular month in one year, they could then forecast how built environment changes that followed would alter pedestrian flows during the same month for the following year, then examine how the predictions fared. With each set of forecasts the model could use updated data, involving things like new housing and business locations.

“We were drawn to Melbourne for this study because they have both a sophisticated system of automated pedestrian counters on many sidewalks in the downtown area, and accurate spatial information on sidewalks and crosswalks city-wide,” Basu says. “The longitudinal nature of pedestrian count data also allowed us to validate our model predictions.”

Ultimately the studies found that the model’s accuracy remained quite stable over time, with some slight decreases year over year, likely due to changes either not captured in the city data, or perhaps due to an increase in ride-sharing during the 2014-2019 time period. During morning and evening rush hours, Melbourne’s heaviest foot traffic was near its train stations — nearly 4,000 pedestrians an hour on some streets — with a substantial amount moving between parking lots and jobs as well. About 10 percent of Melbourne’s foot traffic involves trips to and from local parks.

In general, the researchers, say, the Melbourne tests validate one of the key aspects of the model — that it can generate thorough predictions of foot traffic for a large number of streets even when there are a relatively limited number of locations where pedestrian data is being monitored for calibration.

“The model can generate estimates of foot-traffic on all street segments in a specific area while requiring count data from sensors on a limited number of street segments,” Chancey says, while also noting that such predictions “can inform sidewalk and public space investments” for planners and government decision-makers.

Other scholars say the new findings are a useful extension of the pedestrian activity model.

“Sevstuk and his team have created a robust tool that can be used for estimating pedestrian activity on city streets, for which data are usually nonexistent, and for predicting changes in pedestrian flows in response to changes in the built environment over time,” says Susan L. Handy, a professor of environmental science and policy at the University of California at Davis. “It is about time we had a tool like this to support planners in their efforts to improve the pedestrian environment and reduce car dependence.”

The scholars’ aim is to do for pedestrians what cities currently do for automobiles, namely, count them closely and consider them stakeholders in urban design. The research group is now working on a related project for Beirut, Lebanon, along with scholars from American University in Beirut.