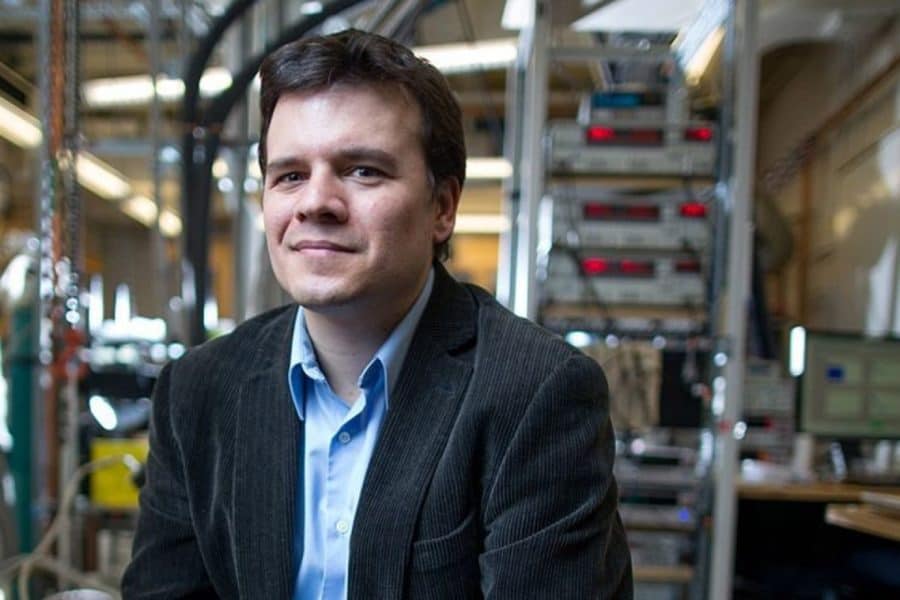 Pablo Jarillo-Herrero, the Cecil and Ida Green Professor of Physics at MIT, has received the 2021 Max Planck-Humboldt Research Award from the Max Planck Society and the Alexander von Humboldt Foundation for his work on two-dimensional quantum materials.

In 2018, Jarillo-Herrero’s research group discovered that by rotating two layers of graphene by a “magic angle,” the bilayer material can be turned from a metal into an electrical insulator or even a superconductor.

Max Planck Society President Martin Stratmann noted Jarillo-Herrero’s research on two-dimensional quantum materials has “opened up a new field of research in which many fundamental insights for both quantum science and quantum technology can be expected.”

Hans-Christian Pape, president of the Alexander von Humboldt Foundation, said that this research “has the potential to make electronic components more efficient and computers faster and to increase the superconductivity of materials.”

Jarillo-Herrero says his research project, based at the Max Planck Institute for Solid State Research and the University of Stuttgart, will create and investigate novel moiré layer systems. For example, he will develop tuning knobs that can be used to control their properties and will create a technique that allows live tracking of how the angle between two superimposed layers affects their electronic properties.

Some of the quantum materials that Jarillo-Herrero is researching rely on the moiré effect created by a honeycomb pattern created by atoms within two superimposed layers of graphene or similar substances. Twisting the layers against each other creates new patterns; rotating the layers together changes optical patterns and physical properties. In addition, his discovery of the first two-dimensional magnet is leading to other advancements in magnetic research and superconductivity.

“Quantum technologies, in particular, have enormous potential for the economy and our society — and we want to tap into that,” says Federal Research Minister Anja Karliczek. “This is why we are particularly pleased about this cross-border cooperation in cutting-edge research.”

Jarillo-Herrero is a professor in the MIT Department of Physics and a native of Spain. He earned his PhD at the Delft University of Technology and completed a postdoc at Columbia University before joining MIT in 2008. He also spent several summers in Germany while studying theoretical physics as a University of Valencia undergraduate.

“I feel really honored to have received this prestigious award by the Max Planck Society and Humboldt Foundation,” says Jarillo-Herrero, who previously earned the APS Oliver E. Buckley Prize and the Wolf Prize in Physics. “One could say I started my scientific career in Germany. So I have very fond memories of my time there, and I am looking forward to interacting and collaborating closely with my colleagues in Stuttgart and elsewhere in Germany.”

Due to coronavirus precautions, this year’s awards will be presented Nov. 3, 2022, in Berlin.