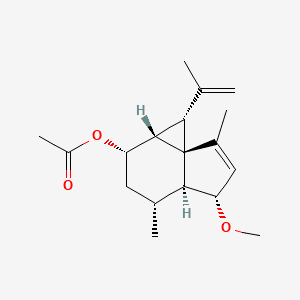 Just north of Antarctica and a little east of the southern tip of South America is the Scotia Sea. Besides glimpses of an occasional iceberg, these waters offer little to tourists.

To biologists, however, the Scotia Sea possesses a diverse ecosystem that is a source of drugs and other therapeutic agents. Such was the case in 2014, when the discovery of shagene A, a compound effective against the parasitic disease leishmaniasis, was reported. A new study in Agnewandte Chemie by Kyoto University removes the need to visit this remote region by describing the total synthesis of the tricyclic terpenoid.

In contrast to orphan diseases, which receive little attention because patients are few, leishmaniasis is one of many neglected tropical diseases afflicting a billion people, typically the poor in developing countries. Leishmaniasis alone affects more than 10 million people worldwide, with another million new infections every year.

Drugs for the disease are available, but some require injection and have detrimental side effects. Shagene A, on the other hand, kills the responsible parasite without side effects. The problem, according to research team leader Chihiro Tsukano, is the compound’s availability.

“This natural compound can only be obtained in very small quantities, and since our sample has been used up no further research is possible,” he notes.

These same therapeutic properties make shagene A an attractive seed for drug discovery, but along with its rarity, its unstable, distorted structure makes it a challenge to synthesize in the lab.

The instability of shagenes comes from their congested 3/6/5 tricyclic ring system. To synthesize the structure of shagene A, the team designed a total synthesis of 21 steps that depends on three key reactions, each using a different transition metal catalyst. Among them, one was especially significant, remarks Yoshiji Takemoto, another author of the study.

“We envisaged a catalyzed double-bond isomerization of alkylidene cyclopropane to relieve the strain.” This reaction depended on using ketones as a directing group, an approach that Takemoto adds, “has no precedent.”

This strategy allowed the researchers to produce multiple tricyclic rings systems with different substitution patterns, including ones causing the instability seen with shagene A.

“Based on the established synthetic route, we were not only able to supply shagene A, but also congeners. Now, we are also investigating more bioactive compounds for further development of leads for leishmaniasis,” states Tsukano.