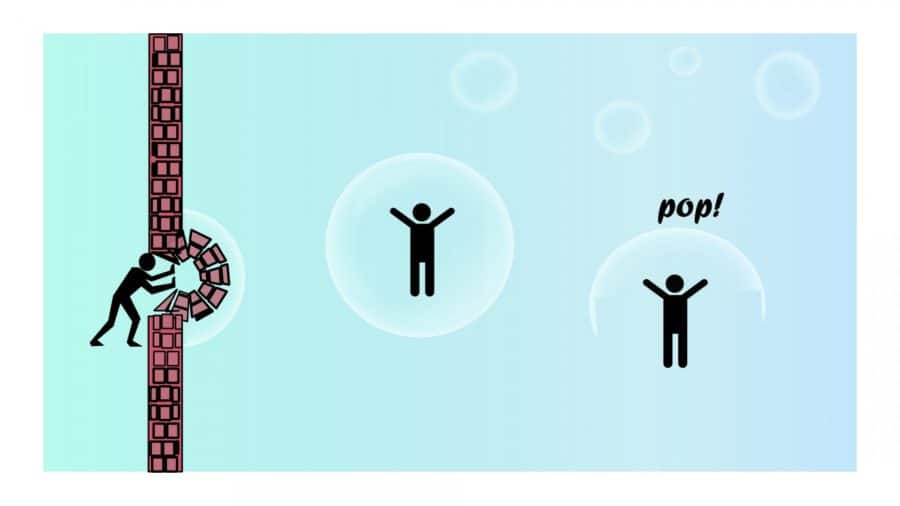 The researchers noticed that some peptides cross membranes by pushing against them. The peptides deformed the membrane into small circular buds. The buds then detach as small bubbles, which eventually “pop,” allowing the peptides to be released inside the cell.

For decades, scientists have wondered how large molecules such as proteins pass through cell walls, also known as plasma membranes, without leaving a trace. That ability is part of what makes certain drugs ­­­­– including some cancer treatments and the COVID-19 vaccine – work. And it is also how bacterial toxins enter human cells and wreak havoc.

One such example is diphtheria toxin, which is produced by Corynebacterium diphtheriae and causes diphtheria, a serious and potentially fatal bacterial infection of the nose and throat. But the mechanics of how these proteins enter human cells were a scientific mystery.

A recent study, published in the journal ACS Chemical Biology, answers that mystery. The study identified the ways in which proteins cross a cell membrane, a finding that could create a scientific foundation for better ways of delivering drugs into cells in the future, or for treating illnesses caused by bacterial toxins.

“It is almost like a magic trick, the way the membrane encapsulates these toxins,” said Dehua Pei, senior author of the study and a professor of chemistry and biochemistry at The Ohio State University.

Pei’s research team at Ohio State has spent years trying to understand how biomolecules such as bacterial toxins get inside a human cell, with the goal of finding ways to get medications into those cells. It was through that work that the researchers discovered how some toxins were getting across the cell membranes, said Ashweta Sahni, lead author of the study and a graduate student in Pei’s lab at Ohio State.

Researchers have known how small molecules penetrate cell membranes, typically by binding to the membrane and then diffusing through it. But they knew that proteins do not have that ability because they are too big. Until now, the most popular hypothesis was that proteins pass through small holes, known as pores, in the membrane, akin to the Parisian statue, Le Passe-Muraille, of a man passing through a wall. But Pei’s previous work did not support that hypothesis.

While working on the team’s other projects, Sahni noticed that some fragments of proteins, known as peptides, cross membranes by pushing against them. The peptides deformed the membrane into small circular buds. The buds then detach as small bubbles, known as vesicles, which eventually “pop,” allowing the peptides to be released inside the cell. The team subsequently observed that two structurally different bacterial toxins also employed this same mechanism. This discovery led them to conclude that this budding-and-collapse mechanism is a common mechanism employed by many large biomolecules.

“This budding-and-collapse phenomenon was previously unknown, but we were able to witness it because we had the equipment, training and experience to know what we were looking at,” Sahni said.

The team witnessed the budding-and-collapse in live cells through confocal microscopy, an imaging technique that allowed them to focus in on what was happening inside the cells, and on the cell membranes, with these specific proteins.

Pei said the discovery could potentially open the door for new drug therapies that use this finding to manipulate the ways drugs enter a cell.

This work was funded by the National Institutes of Health.