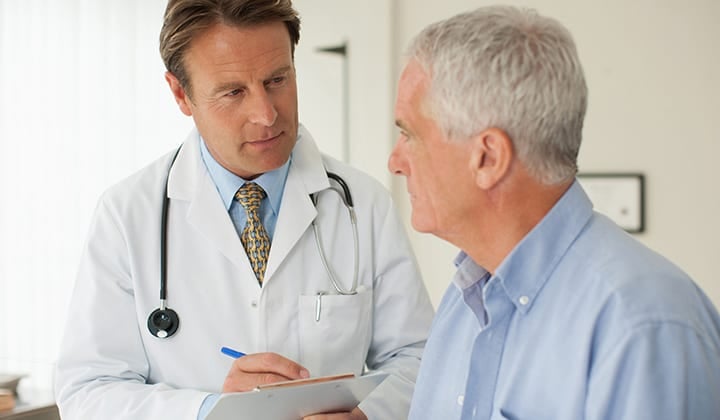 Researchers at the University of East Anglia have shown that a prostate cancer urine test can identify men at ‘intermediate risk’ who can safely avoid immediate treatment and benefit from ‘active surveillance’ instead.

A new pilot study published today reveals how urine biomarkers can show the amount of significant cancer in a prostate, highlighting with more certainty which men need treatment.

But thanks to some fine-tuning, it can now help men with intermediate-risk disease – for whom treatment options had been less clear.

Prostate cancer is the most common cancer in men in the UK. It usually develops slowly and the majority of cancers will not require treatment in a man’s lifetime.

The most commonly-used tests for prostate cancer include blood tests, a physical examination known as a digital rectal examination (DRE), an MRI scan and an invasive biopsy.

However, doctors struggle to predict which tumours will progress to a more aggressive form, making it hard to decide on treatment for many men.

Lead researcher Dr Jeremy Clark, from UEA’s Norwich Medical School, said: “While prostate cancer is responsible for a large proportion of all male cancer deaths, it is more commonly a disease men die with rather than from.

“Therefore, there is a desperate need for improvements in diagnosing and predicting outcomes for prostate cancer patients to minimise over-diagnosis and overtreatment whilst appropriately treating men with aggressive disease, especially if this can be done without taking an invasive biopsy.

“Here at UEA, we have developed a urine test for prostate cancer called the Prostate Urine Risk Test – or PUR for short.

“The ‘risk’ here refers to the aggressiveness of the cancer and its potential to spread to other organs, which would eventually kill the patient. But prostate cancer is very complex and risk levels vary widely between men.

“Previously we have shown that PUR can identify men with high-risk cancer which requires immediate treatment and also low-risk cancer that has a very low rate of progression and does not generally need treatment.

“But there is a third category of men with ‘intermediate-risk’, which falls in between these extremes. Around half of men diagnosed with prostate cancer fall into this group and the treatment pathways for them have been less clear, until now.

“It is known that disease progression in intermediate-risk men is associated with the presence of increasing amounts of Gleason pattern 4 cancer in their prostate. Our study shows that the PUR test can assess the amount of Gleason pattern 4 without the need for a biopsy.

“This means that it can show us which men at intermediate risk may require treatment and which may instead be managed conservatively with surveillance.

“PUR will also be useful for monitoring disease in men that do not currently require treatment, and flag up the emergence and expansion of aggressive disease,” he added.

The results of this pilot study will be further investigated in a much larger cohort of men using samples collected with a prostate screening box which the patients receive by mail and return samples by post directly for analysis at UEA.

“In this research we examine in more detail what biological change PUR is detecting. This is an exciting finding that helps explain why PUR works so well.

“This test is currently being validated in a large multiple site study supported by Prostate Cancer UK and Movember,” he added.

Dr Sarah Hsiao, Director, Biomedical Research and Impact at Movember, said: “This new research from Dr Clark’s team shows that the PUR test can be used to estimate the level of a specific pathological characteristic (Gleason Pattern 4) that is linked to increased risk of disease progression in men with prostate cancer.

“This is important because, for men whose prostate tumour contains varying levels of Gleason Pattern 4, a prostate biopsy is necessary to determine whether men should receive active treatment or be managed by active surveillance.

“We look forward to seeing further validation of this research in a larger study cohort. If successful, this non-invasive PUR test may be able to support decision-making process without needing an invasive prostate biopsy that is associated with discomfort and risk of infection.”

This study was led by UEA in collaboration with researchers in the Urology and Cellular Pathology departments at the Norfolk and Norwich University Hospital, Hull University Teaching Hospitals NHS Trust, the Institute of Cancer Research, The Royal Marsden, and the Earlham Institute.

‘The Urine Biomarker PUR-4 is Positively Associated with the Amount of Gleason 4 in Human Prostate Cancers’ is published in the journal Life (MDPI) on November 3, 2021.