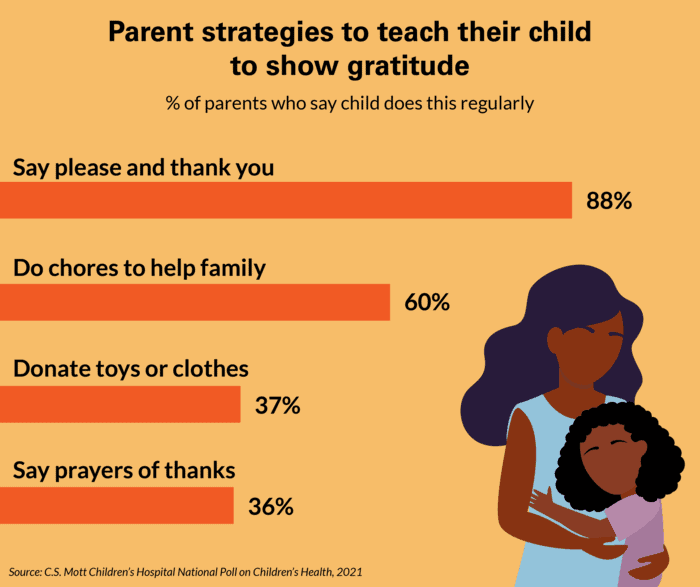 As families prepare to celebrate a holiday focused on gratitude, many parents say their children aren’t as thankful as they should be.

Four in five parents in a new national poll agree that children today are not grateful for what they have, with over half of parents worrying that they’re giving their children too much and two in five saying they’re even sometimes “embarrassed by how selfish their child acts.”

But most parents do in fact want to raise appreciative kids, with three in four saying it’s a high priority to teach their children gratitude, according to the C.S. Mott Children’s Hospital National Poll on Children’s Health at University of Michigan Health.

“Many parents may look back to their own childhood and, in comparison, wonder if they are giving their child too much in the way of material things. Parents may have watched their child behave selfishly, such as refusing to share with other children or saying they don’t like a particular gift,” said Mott Poll co-director Sarah Clark, M.P.H.

“We know that gratitude is associated with more positive emotions, having strong relationships, enjoying more experiences and even health benefits,” she added. “However, gratitude is not something that children usually acquire automatically; it needs to be nurtured, in an age-appropriate way.”

The nationally representative poll report was based on responses from parents of children ages 4-10.

“Parents who place a high priority on teaching their child gratitude are more likely to report their children exhibit behaviors associated with thankfulness and a willingness to give to others,” Clark said.

“While Thanksgiving is a wonderful time to give thanks, parents can teach and model kindness and gratitude throughout the year. Over time and through experiences, children will learn to be grateful for others and appreciate what they have.”

Nearly all parents polled agree that it’s possible to teach children to be grateful, but they used different strategies.