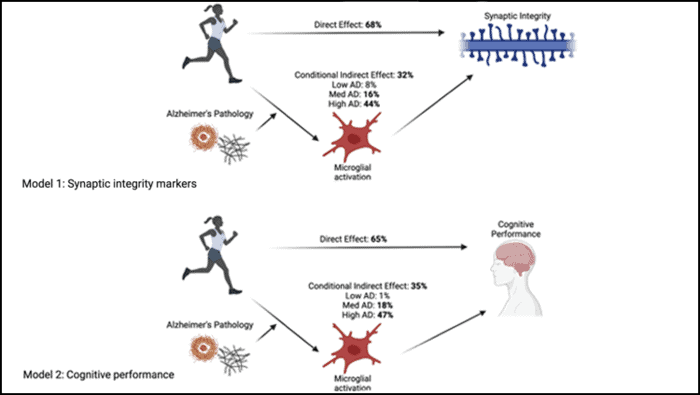 No one will disagree that an active lifestyle is good for you, but it remains unclear how physical activity improves brain health, particularly in Alzheimer’s disease. The benefits may come about through decreased immune cell activation, according to new research published in JNeurosci.

Microglia, the brain’s resident immune cells, activate to clear debris and foreign invaders from the brain. But too much activation can trigger inflammation, damage neurons, and disrupt brain signaling. Exercise helps reduce aberrant activation in animals, but that link hadn’t been established in humans.

JNeurosci, the Society for Neuroscience’s first journal, was launched in 1981 as a means to communicate the findings of the highest quality neuroscience research to the growing field. Today, the journal remains committed to publishing cutting-edge neuroscience that will have an immediate and lasting scientific impact, while responding to authors’ changing publishing needs, representing breadth of the field and diversity in authorship.

About The Society for Neuroscience

The Society for Neuroscience is the world’s largest organization of scientists and physicians devoted to understanding the brain and nervous system. The nonprofit organization, founded in 1969, now has nearly 37,000 members in more than 90 countries and over 130 chapters worldwide.