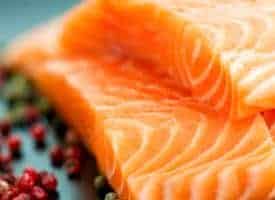 A great many packages of sliced and vacuum-sealed smoked salmon find their way into Danish shopping carts every year. The vast majority of this smoked salmon is sourced from Norwegian aquaculture farms.

In recent times conventionally farmed salmon from Norway has earned a questionable reputation and notoriety for containing pharmaceutical and chemical residues, as well as for polluting the marine environment and spreading disease to wild populations. However, according to the Danish Veterinary and Food Administration salmon on the Danish market does not have a problem with unwanted chemicals, and it is very rare that the authorities find pharmaceutical residues.

But it seems that our knowledge about production conditions plays a major role in how we perceive taste. A study by University of Copenhagen researchers drives the point home.

In the study, 92 Danes were asked to taste samples of conventional, organic and wild-caught smoked salmon. The first round was a blind test in which test subjects were uninformed about what type of salmon they were tasting. In the second round, the subjects were informed. Following each round, the test subjects assessed their sample preferences.

Expectations rub off on taste

“The test demonstrates that people’s expectations about a product are based on information they receive, and that this affects their overall taste experience. With smoked salmon, there seems to be a perception that wild-caught salmon ought to taste better than salmon which is conventionally farmed. However, the blind test revealed that people simply preferred the taste of farmed salmon,” states the study’s first author and PhD fellow Mausam Budhathoki, who conducted the study in conjunction with his graduate thesis at the Department of Food Science.

According to the researchers, there are several possible explanations for people’s preference for farmed fish.

“One possibility is that people are most familiar with both the taste and color of farmed salmon, as this is clearly the most widely available type of salmon on the market. Another reason may be that wild salmon has less flavour due to it being leaner than farmed salmon, as was the case here,” suggests Mausam Budhathoki.

The study, which included focus group interviews as well, reveals that Danes don’t know much about farm-raised salmon.

“It seems that many Danes are quite confused about the differences between various salmon products. This is with good reason, as the salmon production chain is long and relatively opaque. Many factors can influence perceptions about a product. Is there any pharmaceutical residue in it? Does it come from an overfished stock? Has it lived a natural life? And what exactly is fish welfare?” says Helene Christine Reinbach, senior author and an associate professor at the Department of Food Science.

“In the test, wild salmon clearly wins points with regards to information about its provenance. It provides positive associations about being more natural, and consequently, better in terms of animal welfare and health. The fact is, however, that only farmed salmon is eligible for organic certification in Denmark, where there are strict requirements for sustainability, health and animal welfare in production. On the other hand, most wild salmon stocks in our part of the world are in bad shape and have higher concentrations of environmental toxins than farmed salmon.”

Organic salmon wins – but we tend not to buy it

Despite their higher price, many organic foods have significantly increased their market shares in Denmark in recent years. Nevertheless, sales of organic fish – including salmon – remain sluggish. As the organic salmon scored highly in both rounds of the taste test, the researchers believe that there is obvious potential for organic smoked salmon producers and other stakeholders.

“There is a clear opportunity for promotion, in equipping consumers with more information about the positives that differentiate organic salmon from both conventional and wild-caught salmon. For example, more information could be included on packaging to help guide consumers, in relation to the sustainability and health benefits of organic smoked salmon. At the same time, the sector should work to increase the availability of organic choices in local shops, as it can still be tough to get a hold of,” concludes Helene Christine Reinbach.