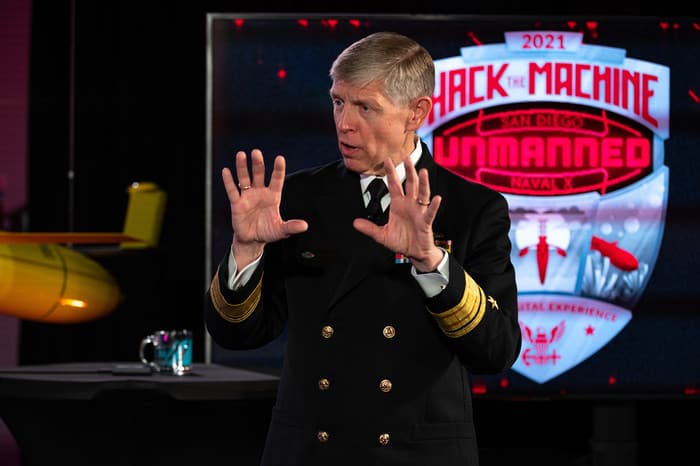 Rear Adm. Lorin Selby, chief of naval research, delivers remarks at the “HACKtheMACHINE” unmanned competition in Alexandria, Va., Nov. 17, 2021. HACKtheMACHINE Unmanned is the first in a series of public-facing technology challenges aimed at accelerating discovery and teambuilding between the DoN, industry and academia for the creation of groundbreaking unmanned and autonomous systems.

Eighty years ago, the attack on Pearl Harbor propelled America into World War II. As the nation commemorates this somber anniversary and its lessons, Chief of Naval Research (CNR) Rear Adm. Lorin C. Selby views it as an opportunity to reflect on the importance of re-envisioning naval power.

Before Pearl Harbor, many in the U.S. Navy believed battleships would be the nucleus of combat power to win any conflict. But the day after the attack—which destroyed or damaged many of America’s battleships—naval leaders realized the nation’s “Strategic Hedge” investment in aircraft carrier and submarine force structure would prove crucial to the war effort.

“If you think of the Navy’s order of battle as a portfolio investment, the order of battle in 1941 was a primary investment in battleships,” said Selby in a recent speech. “But—and this is critical—there was a substantial alternative investment in aircraft carriers and submarines that came to dominate the conflict over the next few years.

“The performance of these alternatives to the main plan eventually was regarded as the pre-eminent formation for naval warfare,” he continued, “and our force structure is still based on carrier strike groups and submarines 80 years later.”

The Navy faces a new crossroads today, according to Selby, involving challenges such as near-peer competition and non-state actor threats. To address these, he presented a new vision for future naval power—involving faster development, testing and transition of unmanned, autonomous systems; more efficient collaborations with industry and academia; and reimagined naval formations.

Selby shared his vision in a new video building on his recent appearance at November’s HacktheMachine Unmanned competition, a technology challenge aimed at accelerating discovery and team building between the Department of the Navy, industry and academia.

“I believe we are in one of those pivotal moments where it is vital to throw off old conventions,” said Selby. “Our time to innovate is now. If we lose this decade of progress, I don’t think we can make up lost ground. I like to keep the pressure on by thinking I have 1,000 days in this job to make a difference for our country.”

A key component of this innovation push, Selby said, is embracing the idea of “the small, the agile and the many”—small unmanned, autonomous platforms that can be constructed, tested and adapted quickly; can be built in large numbers; and are less expensive than larger platforms. These air, surface and subsurface vehicles can be outfitted with a variety of sensors and payloads for diverse missions.

“The small, the agile and the many have the strong potential to define the future in a world where the large and the complex are either too expensive to generate in mass, or potentially too vulnerable to put at risk,” said Selby.

By being built relatively inexpensively, and in greater numbers, these small, agile and many platforms offer multiple advantages: (1) They can be deployed in unique formations to confound and confuse adversaries and (2) if they’re shot down or lost, American forces will have dozens, even thousands, of backups in place. Against an adversary’s expensive platforms, this could play a significant role in deterring aggressive actions.

Harkening back to his Pearl Harbor example of Strategic Hedge, Selby said the idea of the small, the agile and the many represents a viable hedge for supporting the large and complex platforms making up the bulk of today’s force structure. Quickly developing unmanned, autonomous systems will provide a technological edge to the 21st-century Navy and Marine Corps, in whatever future conflict they engage.

Such demonstrations already have begun. ONR provided dozens of unmanned platforms and sensors used in last April’s Integrated Battle Problem 2021 (IBP-21), which focused on a PACFLEET battle problem. In 2022, those efforts will continue, including partnering with SOUTHCOM to deliver new tools for drug interdiction efforts.

“I invite everyone to join me in this mission,” said Selby. “This is going to be fun. We’re going to ignite American passion to do something amazing—do it at scale, do it with a purpose and do it now. We’re going to find the right balance of collaboration and competition to ignite our nation’s creative engine and prove the value of the small, the agile and the many.”