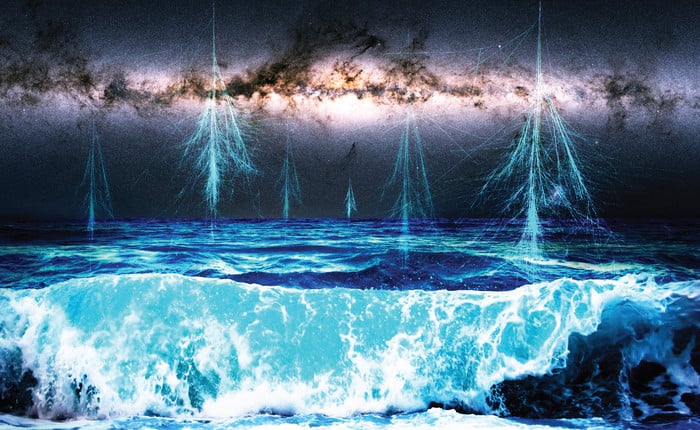 Evidence demonstrates a close connection between the fraction of organic matter buried in sediments and changes in supernovae occurrence. This correlation is apparent during the last 3.5 billion years and in closer detail over the previous 500 million years.

The correlation indicates that supernovae have set essential conditions under which life on Earth had to exist. This is concluded in a new research article published in the scientific journal Geophysical Research Letters by senior researcher Dr. Henrik Svensmark, DTU Space.

According to the article, an explanation for the observed link between supernovae and life is that supernovae influence Earth’s climate. A high number of supernovae leads to a cold climate with a significant temperature difference between the equator and polar regions. This results in strong winds and ocean mixing, vital for delivering nutrients to biological systems. High nutrient concentration leads to a larger bioproductivity and a more extensive burial of organic matter in sediments. A warm climate has weaker winds and less mixing of the oceans, diminished supply of nutrients, a smaller bioproductivity, and less burial of organic matter.

In the paper, a measure of the concentration of nutrients in the ocean over the last 500 Million years correlates reasonably with the variations in supernovae frequency. The concentration of nutrients in the oceans is found by measuring trace elements in pyrite (FeS2, also called fool’s gold) embedded in black shale, which is sedimented on the seabed. Estimating the fraction of organic material in sediments is possible by measuring carbon-13 relative to carbon-12. Since life prefers the lighter carbon-12 atom, the amount of biomass in the world’s oceans changes the ratio between carbon-12 and carbon-13 measured in marine sediments.

“The new evidence points to an extraordinary interconnection between life on Earth and supernovae, mediated by the effect of cosmic rays on clouds and climate,” says Henrik Svensmark.

The link to climate

Previous studies by Svensmark and colleagues have demonstrated that ions help the formation and growth of aerosols, thereby influencing cloud fraction. Since clouds can regulate the solar energy that can reach Earth’s surface, the cosmic-ray-cloud link is important for climate. Empirical evidence shows that Earth’s climate changes when the intensity of cosmic rays changes. Supernovae frequency can vary by several hundred per cent on geological time scales, and the resulting climate changes are considerable.

“When heavy stars explode, they produce cosmic rays made of elementary particles with enormous energies. Cosmic rays travel to our solar system, and some end their journey by colliding with Earth’s atmosphere. Here, they are responsible for ionizing the atmosphere,” he says.