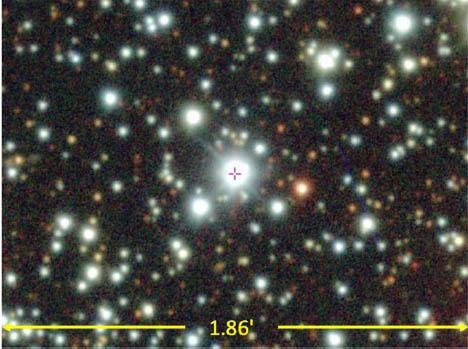 An optical/near-infrared image of the sky around the TESS Input Catalog (TIC) object TIC 400799224 (the crosshair marks the location of the object, and the width of the field of view is given in arcminutes). Astronomers have concluded that the mysterious periodic variations in the light from this object are caused by an orbiting body that periodically emits clouds of dust that occult the star.

Astronomers have spotted something way the heck out there, but even their smartest computers can’t figure out what it is.

The Transiting Exoplanet Survey Satellite, TESS, was launched in 2018 with the goal of discovering small planets around the Sun’s nearest neighbor stars. TESS has so far discovered 172 confirmed exoplanets and compiled a list of 4703 candidate exoplanets. Its sensitive camera takes images that span a huge field of view, more than twice the area of the constellation of Orion, and TESS has also assembled a TESS Input Catalog (TIC) with over 1 billion objects. Follow-up studies of TIC objects have found they result from stellar pulsations, shocks from supernovae, disintegrating planets, gravitational self-lensed binary stars, eclipsing triple star systems, disk occultations, and more.

CfA astronomer Karen Collins was a member of a large team that discovered the mysterious variable object TIC 400799224. They searched the Catalog using machine-learning-based computational tools developed from the observed behaviors of hundreds of thousands of known variable objects; the method has previously found disintegrating planets and bodies that are emitting dust, for example. The unusual source TIC 400799224 was spotted serendipitously because of its rapid drop in brightness, by nearly 25% in just a few four hours, followed by several sharp brightness variations that could each be interpreted as an eclipse.

The astronomers studied TIC 400799224 with a variety of facilities including some that have been mapping the sky for longer than TESS has been operating. They found that the object is probably a binary star system, and that one of the stars pulsates with a 19.77 day period, probably from an orbiting body that periodically emits clouds of dust that occult the star. But while the periodicity is strict, the dust occultations of the star are erratic in their shapes, depths, and durations, and are detectable (at least from the ground) only about one-third of the time or less. The nature of the orbiting body itself is puzzling because the quantity of dust emitted is large; if it were produced by the disintegration of an object like the asteroid Ceres in our solar system, it would survive only about eight thousand years before disappearing. Yet remarkably, over the six years that this object has been observed, the periodicity has remained strict and the object emitting the dust apparently has remained intact. The team plans to continue monitoring the object and to incorporate historical observations of the sky to try to determine its variations over many decades.