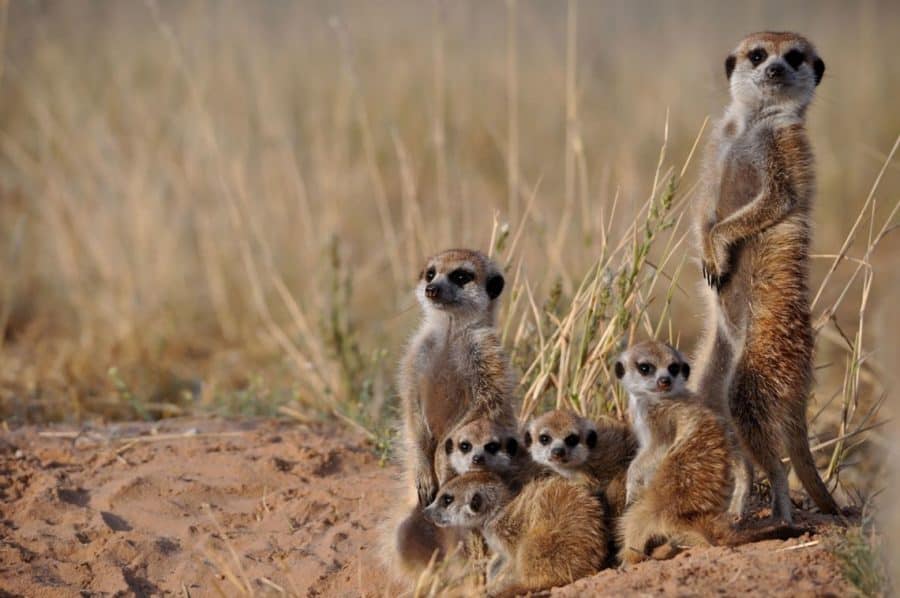 New research finds that testosterone-fueled aggression by the matriarch is a crucial part in the evolution of cooperation in meerkat societies. Photo: Charli Davies

Cooperation and aggression. Meerkats are showing us that one may not be possible without the other.

In a study appearing this week in the journal Nature Communications, a team of researchers led by Christine Drea, professor of Evolutionary Anthropology at Duke University, shows that testosterone-fueled aggression may be a crucial part in the evolution of cooperation in meerkat societies.

Meerkat societies have a clear boss: the matriarch. Along with her lucky mate, she rules over a group of subordinate females and males of all ages. According to these new results, her dominion depends almost entirely on her very high levels of testosterone.

Subordinates help raise the matriarch’s pups. They are cooperative breeders who can’t raise their offspring by themselves. Parents need the help of their group to find food and protect their young while they are busy finding food for themselves.

But the matriarchs aren’t exactly benevolent leaders. To ensure that the subordinates give her pups undivided attention, she will often attack pregnant subordinates, expelling them from the group, or killing their newborn pups.

As a result, few of the adult subordinate females in a clan manage to have surviving pups in any given year. A successful matriarch, on the other hand, can have as many as three or four successful litters in a good year.

In addition to preventing the subordinate females from reproducing, matriarchs dominate by pushing and shoving, biting and growling, and they mark their turf by rubbing their behinds against rocks and shrubs, spreading a pungent scent-marking substance produced in glands hidden under their tail.

Now, researchers have found that the matriarch’s bossiness, and therefore her success, is due to very high levels of testosterone.

To test how testosterone levels relate to the matriarch’s success, the research team worked with 22 clans of meerkats at the Kuruman River Reserve, in South Africa’s Kalahari Desert.

These meerkats have been studied for decades and are habituated to humans. This allowed researchers to study the matriarchs’ behavior throughout their pregnancies – taking note of all the times they showed aggressive behaviors – and to collect the blood and feces used to measure their testosterone levels through time.

“In non-pregnant matriarchs, testosterone values are equivalent to the males’, and just a little bit lower in subordinate females. But when matriarchs get pregnant, they ramp up,” said Drea.

Both the matriarchs’ aggressiveness and testosterone levels increased together as their pregnancies progressed. Once born, their pups were also aggressive, furiously demanding care and feeding from the subordinates like spoiled little brats.

But is testosterone actually driving all of this aggressiveness? To answer that, researchers treated some matriarchs with flutamide, a testosterone-receptor blocker that prevents testosterone’s action in the body.

Matriarchs treated with flutamide didn’t shove, bite, or growl as much. They also didn’t mark their territory quite as often. Subordinates picked up on that and stopped being so deferential. Their boss had lost her edge.

The boss’ offspring also lost their edge. Without the testosterone boost they would have gotten in their mom’s womb, their behavior changed. Pups from matriarchs treated with flutamide were calmer and less aggressive towards the subordinates.

The cross-generational effect of hormones means that testosterone doesn’t simply help the matriarch have more pups. It also helps her pups get a great start in life by bullying the subordinates.

Since blocking the matriarch’s testosterone changes the pups’ behavior, hormones may be driving the maintenance of a cooperative family dynasty.

“Here we have experimental results revealing a new mechanism for the evolution of cooperative breeding,” Drea said, “one that is based on testosterone-mediated aggression and competition between females.”

“Females are not primarily competing for food,” she said. “Competition is about ensuring that other individuals help raise their kids. And testosterone helps them win that reproductive battle.”

“When people think about cooperation, they usually think about altruism or helping others,” Drea said. “This study is showing that cooperation can also arise through aggressive means, and quite effectively.”

This research was funded by the National Science Foundation (IOS-1021633 to C.M.D.). Researchers relied on records maintained by the Kalahari Meerkat Project, which has been supported by European Research Council Grant (No 294494 to T.C.-B.) and Swiss National Science Foundation Grant (31003A 13676 to M. Manser). Cambridge, Duke, and Zurich Universities supported the Kalahari Meerkat Project during the span of this study.