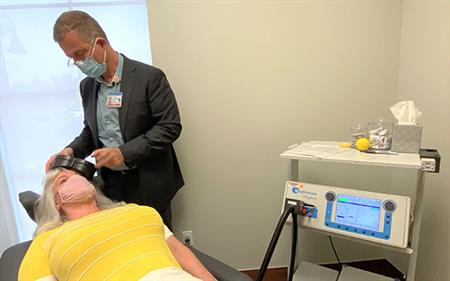 Adevice shaped like a ping-pong paddle delicately brushes the left side of Teresa Lindhardt’s forehead. Her psychiatrist reaches over to flip a switch. Several bursts of what sound like soft bug zaps ensue for three minutes.

After six weeks of daily treatments with transcranial magnetic stimulation (TMS), Lindhardt, 55, says she’s completely free of the symptoms of depression that disrupted, and twice nearly ended, her life.

“For me, this has been the most life-changing thing that has ever happened,” said the former X-ray technician, who first noticed the difference two weeks into treatment. “I look forward to things. I’m not exhausted. I have my life back.”

Lindhardt’s first suicide attempt landed her in the intensive care unit at age 15.

“I don’t know how I ended up making it through because I had failsafe plans, but I did,” she said. “They told my mom that I probably wasn’t going to make it. But I made it, and after that, my depression went up and down in cycles that were really intensely bad. Sometimes, I couldn’t get out of bed for days. I would do nothing and say nothing, just look at the ceiling.”

Lindhardt has major depressive disorder. It is the leading cause of disability in the U.S. for ages 15 to 44, affecting more than 16 million American adults, or approximately 6.7 percent of the U.S. population age 18 and older in any given year, according to the National Institute of Mental Health.

“I feel like the SSRIs helped me, but not enough,” Lindhardt said. “The suicidal ideation was always there in the background. I could be as happy as I could be and still be planning a suicide. Also, there were side effects and then you have to take more pills for the side effects for the pills.”

With TMS — also called rTMS for repetitive transcranial magnetic stimulation — clinical trials have shown a 50 percent reduction in symptoms for about half of patients with treatment-resistant depression. A third of patients, like Lindhardt, achieve complete remission.

“The idea that you can transform a person’s life like we did with Teresa with a relatively brief, easy-to-use and very well-tolerated treatment is quite heartening,” said Jeff Daskalakis, MD, PhD, who is Lindhardt’s psychiatrist and chair of the Department of Psychiatry at UC San Diego School of Medicine.

The prototype for TMS was developed in the 1980s. A decade later, small-scale studies began. By the 2000s, there was a pivotal trial that led the Food and Drug Administration to approve TMS in 2008 for treating antidepressant-resistant depression. Currently, it’s also approved for smoking cessation and obsessive-compulsive disorder.

The TMS device itself contains a coil of wires that emit a magnetic pulse. This generates a tiny electrical field inside the brain that excites neurons near the surface. There are few reported side effects and the process is pain-free for the overwhelming majority of patients, including Lindhardt, who likened it to “just like someone tapping their fingernail on my forehead.”

“The idea is that we’re promoting a process known as neuroplasticity, which is a synchronization of neurons firing more actively,” said Daskalakis, who has offered the treatment since 2002. “And when neurons fire together, over time, they tend to fire in healthier ways, which is thought to be related to the therapeutic results.”

How long the positive effects of TMS last is not known. Daskalakis cites much variance among his patients. Some need repeated treatments; some never seem to experience depression again.

Will TMS become a frontline treatment for depression?

“It may very well be an exceptional idea to upstream TMS earlier in the course of treatment,” Daskalakis said. “But we don’t know if it is in any way superior or equal in efficacy to medications. And, the truth is, it’s not going to scale as effectively as medications are. You can access a whole lot more people with medications than you can with TMS.”