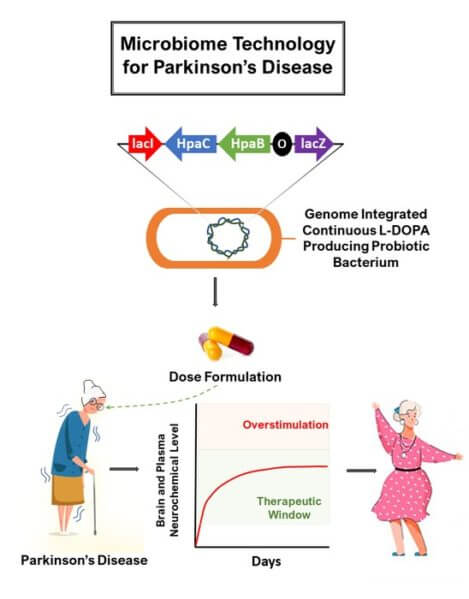 Researchers have engineered probiotic bacteria that can synthesize the dopamine precursor L-DOPA, a powerful mainstay treatment for Parkinson’s disease. Preclinical tests show that the new treatment approach is not only safe and well-tolerated but also eliminates side effects that eventually develop when L-DOPA is taken orally.

“We are harnessing the metabolic capability of beneficial microbes that live in the gut to synthesize a molecule that is the ‘gold standard’ therapeutic strategy for Parkinson’s disease,” said Anumantha Kanthasamy, PhD, professor and Johnny Isakson Chair, Georgia Research Alliance Eminent Scholar at the University of Georgia (UGA) in Athens, Ga. “This next-generation microbial bioengineering technology is designed so that Parkinson’s patients could make their own L-DOPA with microbes in their gut.”

Piyush Padhi, a doctoral student in Kanthasamy’s lab, will present the new research at the American Society for Pharmacology and Experimental Therapeutics annual meeting during the Experimental Biology (EB) 2022 meeting, to be held April 2–5 in Philadelphia.

Dopamine replacement in the form of levodopa L-DOPA tablets taken 3-4 times a day has been used to treat Parkinson’s disease for over six decades. While the treatment does reduce disease symptoms, severe motor side effects — referred to as levodopa-induced dyskinesia — begin to develop after about five years of use. This complication is linked to the fact that delivery of L-DOPA to the brain isn’t continuous.

To address this challenge, Kanthasamy’s research team used newly developed synthetic biology and genetic engineering techniques to generate a safe and tolerable probiotic bacterium that can synthesize L-DOPA from tyrosine produced by the body.

“After several iterations and improving gut microbiome-based drug delivery technology, we have developed a gut-healthy probiotic bacteria that can produce stable levels of L-DOPA in a way that can be highly tuned to deliver the dose required for each patient,” said Padhi.

Ideally, the treatment would be delivered in an encapsulated pill taken once or twice a day. The dose can be adjusted by pre-activating the cells with rhamnose — a simple sugar that enables the bacteria to produce L-DOPA — or modifying the number of bacteria cells delivered in a pill.

Tests of the new drug delivery approach in rodent and canine models showed that it can achieve consistent L-DOPA levels in blood plasma and steady brain dopamine levels without any unwanted fluctuation. The researchers also found that the live biotherapeutic improved motor, cognitive and mood-related tasks in a mouse model of Parkinson’s disease.

“We are hoping that our continuous, non-pulsatile microbial-based delivery method for L-DOPA limits the development and progression of levodopa-induced dyskinesia,” said Kanthasamy, who also directs UGA’s Center of Brain Science and Neurodegenerative Disease. “We are currently exploring using this approach to deliver treatments for other conditions such as Alzheimer’s disease and depression and are in process of initiating FDA approval for clinical testing of this novel gut microbiome therapeutic technology.”