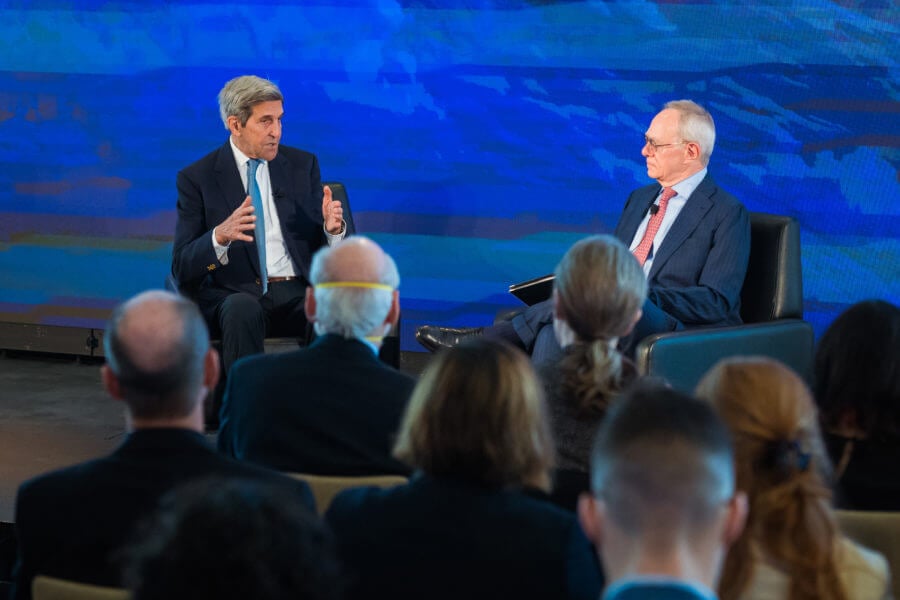 On the eve of Earth Day, more than 300 faculty, researchers, students, government officials, and industry leaders gathered in the Samberg Conference Center, along with thousands more who tuned in online, to celebrate MIT’s first-ever Climate Grand Challenges and the five most promising concepts to emerge from the two-year competition.

The event began with a climate policy conversation between MIT President L. Rafael Reif and Special Presidential Envoy for Climate John Kerry, followed by presentations from each of the winning flagship teams, and concluded with an expert panel that explored pathways for moving from ideas to impact at scale as quickly as possible.

“In 2020, when we launched the Climate Grand Challenges, we wanted to focus the daring creativity and pioneering expertise of the MIT community on the urgent problem of climate change,” said President Reif in kicking off the event. “Together these flagship projects will define a transformative new research agenda at MIT, one that has the potential to make meaningful contributions to the global climate response.”

Reif and Kerry discussed multiple aspects of the climate crisis, including mitigation, adaptation, and the policies and strategies that can help the world avert the worst consequences of climate change and make the United States a leader again in bringing technology into commercial use. Referring to the accelerated wartime research effort that helped turn the tide in World War II, which included work conducted at MIT, Kerry said, “We need about five Manhattan Projects, frankly.”

“People are now sensing a much greater urgency to finding solutions — new technology — and taking to scale some of the old technologies,” Kerry said. “There are things that are happening that I think are exciting, but the problem is it’s not happening fast enough.”

Strategies for taking technology from the lab to the marketplace were the basis for the final portion of the event. The panel was moderated by Alicia Barton, president and CEO of FirstLight Power, and included Manish Bapna, president and CEO of the Natural Resources Defense Council; Jack Little, CEO and co-founder of MathWorks; Arati Prabhakar, president of Actuate and former head of the Defense Advanced Research Projects Agency; and Katie Rae, president and managing director of The Engine. The discussion touched upon the importance of marshaling the necessary resources and building the cross-sector partnerships required to scale the technologies being developed by the flagship teams and to deliver them to the world in time to make a difference.

“MIT doesn’t sit on its hands ever, and innovation is central to its founding,” said Rae. “The students coming out of MIT at every level, along with the professors, have been committed to these challenges for a long time and therefore will have a big impact. These flagships have always been in process, but now we have an extraordinary moment to commercialize these projects.”

The panelists weighed in on how to change the mindset around finance, policy, business, and community adoption to scale massive shifts in energy generation, transportation, and other major carbon-emitting industries. They stressed the importance of policies that address the economic, equity, and public health impacts of climate change and of reimagining supply chains and manufacturing to grow and distribute these technologies quickly and affordably.

“We are embarking on five adventures, but we do not know yet, cannot know yet, where these projects will take us,” said Maria Zuber, MIT’s vice president for research. “These are powerful and promising ideas. But each one will require focused effort, creative and interdisciplinary teamwork, and sustained commitment and support if they are to become part of the climate and energy revolution that the world urgently needs. This work begins now.”

Zuber called for investment from philanthropists and financiers, and urged companies, governments, and others to join this all-of-humanity effort. Associate Provost for International Activities Richard Lester echoed this message in closing the event.

“Every one of us needs to put our shoulder to the wheel at the points where our leverage is maximized — where we can do what we’re best at,” Lester said. “For MIT, Climate Grand Challenges is one of those maximum leverage points.”