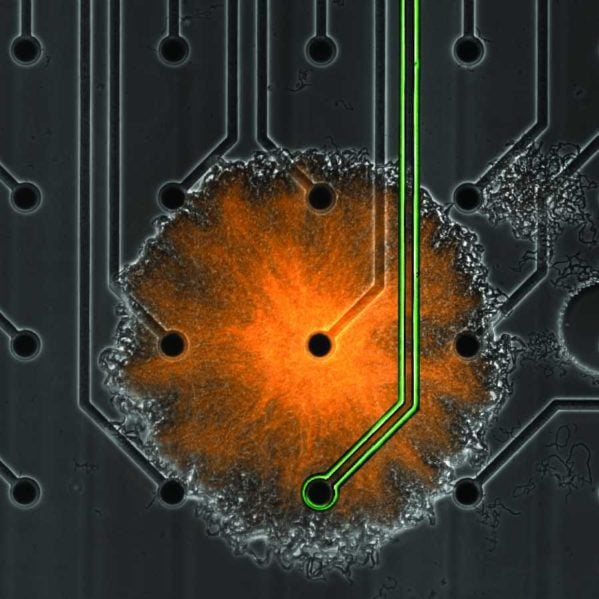 Clusters of microscopic bacteria exist all around us. These invisible communities, known as biofilms, are found in habitats ranging from our skin surface to sewer pipes and play integral roles in environments spanning healthcare to agriculture.

Molecular biologists and physicists at the University of California San Diego have joined forces to develop a novel method of using electrical shocks to control the development of communities of bacteria. Their findings, obtained with a newly developed technology, are significant from a medical perspective. In areas where bacteria growth is a concern, biofilms can lead to chronic infections, especially in locations such as hospitals where antibiotic resistance is a major health threat.

Much like other multi-cellular organisms, biofilms are composed of various cell types that carry out specialized roles. For example, matrix-producing cells provide the structural “glue” that holds the bacterial community together while motile cells play a role in the formation and spread of biofilms. The balance of these two cell types defines the physical and biological properties of the biofilm and is also important for its development. If there are too many matrix-producing cells, the biofilm becomes too rigid and cannot grow efficiently. If there are too many motile cells, the biofilm disintegrates as the cells swim away. Thus, changing the ratio of these two cell types offers a precise method for controlling biofilms.

UC San Diego scientists developed a new technology that specifically targets one type of cell among genetically identical bacteria that live in the same microenvironment. They discovered that a second-long shock emitted by an electrode (dark circle in the center), preferentially causes growth of (orange) motile cells, rather than (blue) matrix-producing cells, thereby changing the ratio of cell types in the community. Credit: Süel Lab, UC San Diego

As described May 4, 2022 in the journal Cell Systems, a team at UC San Diego with postdoctoral scholar Colin Comerci and fellow researchers in the laboratory of Professor Gürol Süel in the Department of Molecular Biology, along with colleagues in the Department of Physics, developed a novel microfluidic device and combined it with a multi-electrode array, which allowed them to apply localized electric shocks to a growing biofilm.

To the researchers’ surprise, electrical stimulation caused motile cells to multiply, even though all cells in the biofilm are genetically identical.

“While it is known that electrical shocks can kill cells, here we show that they can cause growth of a specific sub-type of cells,” said Süel, a Biological Sciences professor with affiliations in the San Diego Center for Systems Biology, BioCircuits Institute and Center for Microbiome Innovation. “How a second-long stimulation can promote growth for hours and only of one type of cells is a great puzzle that we are eager to solve.”

A community of bacteria known as a biofilm (orange) is shown growing on a microelectrode array (black circles). This newly developed device allows the selective stimulation of one type of bacterial cell around a microelectrode (green track). Credit: Süel Lab, UC San Diego

“Being able to modulate cell types in this way is not just important for understanding biofilms,” said Comerci. “The electrochemical signals we used are similar to signals used during development in more complicated organisms like frogs, fish or even humans. Thus, our findings may offer analogies to other biological systems.”

Why electrical stimulation boosts the population of one cell type rather than another remains a mystery and continues to be studied at the Süel laboratory. Such influence, the researchers say, provides control of the biofilm’s composition and development, and may offer a new tool to destabilize biofilms in healthcare and agriculture settings.