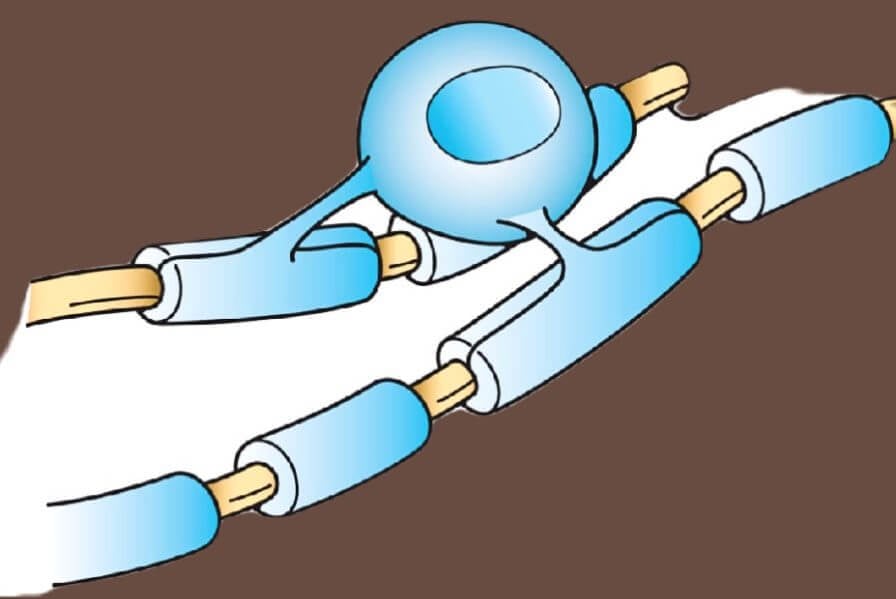 Insulation has never been the most thrilling of topics — in fact, we usually hide it away, out of sight, out of mind.

But recently, a growing body of research in neuroscience is revealing that the specialized insulation of nerve cells may play an outsized role in brain health — from understanding the nervous system’s early development to surprising new roles in age-related cognitive decline. The number of papers published on myelin — a fatty insulating sheath that wraps nerve fibers, helping them to send long-range signals — has skyrocketed in recent years, and a collaboration between two Wu Tsai Neurosciences Institute interdisciplinary postdoctoral scholars has led them both to the heart of this burgeoning field.

Tal Iram joined the lab of Tony Wyss-Coray at Stanford after a PhD at Tel Aviv University in Israel, where she won the prestigious Clore Fellowship, given to just 10 Israeli PhD students each year. Once at Stanford, she was awarded a Wu Tsai Neuro Interdisciplinary Scholar Award to study CSF in the aging brain and soon struck up a collaboration and friendship with fellow interdisciplinary scholar Miguel Garcia. Garcia had earned his PhD at Stanford while participating in the Haas Center Graduate Public Service Fellowship and was conducting his postdoctoral research on myelin formation during early brain development in the lab of Bradley Zuchero.

The formation of myelin by specialized brain cells called oligodendrocytes is a crucial stage of brain development, and damage to these cells causes demyelinating diseases such as multiple sclerosis. Little is known, however, about what healthy oligodendrocyte development looks like, what happens to these cells as we get older, and what role they might play in neurodegenerative disorders. Together, Iram and Garcia have been working to fill in gaps in neuroscience’s understanding of these overlooked brain cells.

Iram’s work recently led to a groundbreaking new paper published May 11, 2022 in the journal Nature, which found that the cerebrospinal fluid that bathes our brains may maintain healthy memory and cognition through effects on oligodendrocytes. Garcia recently joined a startup called Addition Therapeutics and has a future paper in the works which examines how oligodendrocytes first assume their roles in the healthy developing brain.

We spoke with Iram and Garcia to learn more about the origins of their collaboration, the related projects they’ve been working on and their time at Stanford.

Miguel, you joined the Zuchero lab already planning to study oligodendrocytes. Can you tell us what these cells are and why you find them interesting?

MG: Oligodendrocytes speed the signaling between neurons, somewhat like insulation on a wire supports long-range electrical signaling. Without them our neurons couldn’t communicate efficiently. We wouldn’t have the complex signaling that makes our brains so powerful. What’s particularly fascinating to me is how this myelin formation takes place.

Basically, an oligodendrocyte will reach out a tendril looking for an axon, which is the long, narrow part of a neuron that sends messages to other neurons. When it finds one, the oligodendrocyte grabs on and starts to grow to wrap around it. To get an idea of what this looks like, imagine your hand grabbing a pipe that is a bit too wide for your fingers to curl around. Once you clamp onto that pipe, your fingertips start growing at the tips and they keep growing until they’ve wrapped two to three times around the pipe under your palm. Then your fingers stay wrapped around the pipe but collapse so that now they are only the thickness of your nail. That’s essentially what’s happening when an oligodendrocyte is creating the myelin sheath, or this insulation around an axon.

Before my postdoc, I was studying cytoskeleton proteins that allow cells to move and grow, and when Brad started talking to me about the gymnastics that oligodendrocytes have to perform to myelinate neurons, I was hooked.

Tal, you are also studying oligodendrocytes, but you came to them by accident. How did that happen?

TI: When I first got to Stanford, I could never have imagined studying oligodendrocytes. I had zero expertise in that area and the lab I joined had also never studied them. For my PhD, I studied a different brain cell, called an astrocyte, and how that cell clears debris from the brain in diseases like Alzheimer’s

For my postdoc I wanted to broaden my experience in aging in general and I got fascinated by the work done in the Wyss-Coray lab, which showed that young blood plasma can rejuvenate the brains of old mice. I started doing experiments to see if we could see the same effect with CSF, which is evolved to match the brain’s unique needs. To my surprise, I kept seeing signals for changes in expression of oligodendrocyte and myelination genes in the hippocampus, which is a part of the brain that’s important for learning and memory. I wasn’t looking for this signature at all — it just kind of jumped at me.

Wow, so that’s suddenly a very powerful link you two had. What did your collaboration look like?

TI: I realized then that there was very little existing research on what happens to this kind of cell during aging. I also realized I had no tools to study this question alone. That’s when I got in contact with Miguel and his mentor, Brad Zuchero, who agreed to help me.

MG: When we realized that we were looking at such similar things, we started asking ourselves how we could synergize our work. There was a lot of collaboration and troubleshooting together. Years later, what Tal is publishing is amazing, and we have another paper in the pipeline that’s going to be very complimentary.

Tal, your research led to a study that came out May 11 in Nature. Tell me about that work.

TI: We found that if the brains of older mice are exposed to CSF from healthy, young individuals, it can actually improve memory function. It seems like that’s happening because the young CSF leads to the birth of new oligodendrocytes and, in turn, more myelination in the hippocampus. Through a number of experiments, we were also able to pinpoint some of the molecules that were driving these changes. There’s a protein in CSF called Fgf17, for example, that can induce similar effects in older mice all by itself. And Fgf17 seems to work by activating another molecule — a transcription factor called SRF — which we know is related to proteins in the cytoskeleton. All of this suggests that Fgf17 in CSF can boost oligodendrocyte function through SRF. That’s a chain we want to know much more about because maybe a deeper understanding could lead to new therapies.

MG: And I just want to say I’m so happy for Tal. She worked incredibly hard on this. For example, because it’s so hard to collect CSF from mice, she and Tony ended up using young healthy human CSF in the paper as well. They had to find a collaborator who could share the barest minimum of this precious and borderline inaccessible fluid. And, amazingly, this tenacity enabled her to show in the study that there is something in the CSF that could help improve the aging process!.

Tal, you celebrated the paper’s acceptance in a pretty extreme way, I hear.

TI: I went skydiving! I have some previous experience, and maybe two years ago I promised a research associate who works with me that if our work got accepted in Nature I would take her. So we went!

Very brave! Of course, that’s not the end of the story for your work together. There’s another paper in the works focused on projects Miguel was leading. I know you can’t go into too many details because the paper is in preparation, but give me a general idea.

MG: I was studying oligodendrocyte development and the effects of this transcription factor SRF at earlier stages. We’ve been looking into how it affects the dynamics of the cytoskeleton to influence an oligodendrocyte’s ability to wrap around a neuron’s axon and create myelin, for example. Tal’s paper shows why oligodendrocytes are so important for healthy aging. I want to show how oligodendrocytes work, which hopefully will provide more clues related to brain health in general.

You were both in the same year in the Interdisciplinary Postdoctoral Scholars program. How did that program facilitate your collaboration and support you in general?

TI: The spirit of collaboration is so important. I couldn’t have done any of this research without our collaboration with Brad [Zuchero]. His lab produces oligodendrocytes and progenitor cells every week for their experiments and at the beginning he told me ‘just show up at the end of prep and you can have whatever’s left over.’ Three years later, I’m still showing up.

The first half of a postdoc is also usually so difficult. So just receiving a vote of confidence from Brad and having someone like Miguel to work through problems with was incredibly helpful. It was just an amazing connection that was enabled by Wu Tsai Neuro and the Interdisciplinary Scholars program.

I also wanted to give credit to Miriam Goodman. She’s the founding director of the postdoc program and she truly cares about mentorship — as does Liqun Luo, who recently joined Miriam as co-director. When the pandemic started and we were in a strict shelter-in-place, she made sure to have regular meetings just to check that everyone was ok and not giving up. I had my daughter at home and I remember one time Miriam said, ‘Okay, let’s do one meeting where everyone has to explain their science to Tal’s four year old.’ She was very creative in how she tried to engage us.

MG: Agreed. And I have to tip my hat to Wu Tsai Neuro, because everybody in the neuroscience field at Stanford is very communicative and the institute helps make that happen. I had such a close relationship with everyone in my cohort within the Interdisciplinary Postdoctoral Scholars program as well. I know that, if someday down the line I’m working on some project and want their input or advice, I could make a call to any of them and they would be there. I believe that is one of the points of this program: it’s not just about immediate collaborations or immediate publications — it is really to create this community that gets diffused geographically and across time that, down the line, will bear fruit for humanity. And I really respect the program for that.

What’s next for both of you?

MG: I recently joined a startup called Addition Therapeutics. We’re in “stealth mode” right now, so I can’t say too much about it, but it’s a biotech company related to gene therapies, and I think it’s an exciting opportunity to take what I’ve learned in my postdoc and my previous work and apply that to something that will hopefully be able to help people in the near future.

Other than that, I’m still acting as a consultant of sorts on the paper that’s in production, and I’m also a full-time jester for my two-year-old.

TI: ‘Parent and scientist’ covers about 90 percent of my schedule as well!

I’m personally excited to keep studying oligodendrocytes in aging, and  whether they’re something that could be targeted to restore memory in age-related neurodegeneration.  There’s this big hole in the field in terms of knowing what’s happening to these cells in the older brain and how they affect cognitive function in general. It’s known that they support the synchronization of brain networks through the physical support that myelination gives. But is there more? Do oligodendrocytes themselves somehow encode memory in myelin in parallel to the synaptic coding that is already well described? No one knows.