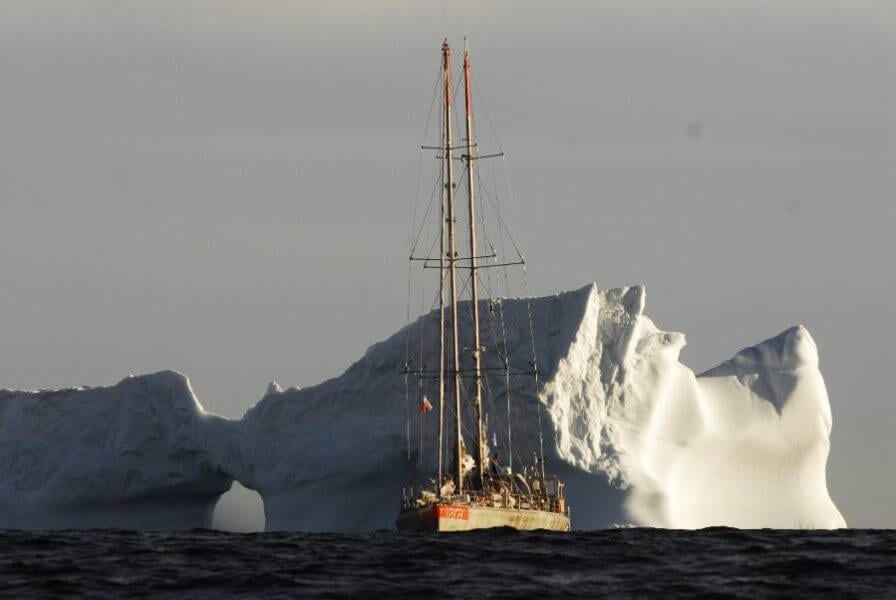 A network-based ecological interaction analysis showed the diversity of RNA viral species was higher than expected in the Arctic and Antarctic. Photo: Tara Ocean Foundation

A deep dive into the 5,500 marine RNA virus species scientists recently identified has found that several may help drive carbon absorbed from the atmosphere to permanent storage on the ocean floor.

The analysis also suggests that a small portion of these newly identified species had “stolen” genes from organisms they infected, helping researchers identify their presumed hosts and functions in marine processes.

Beyond mapping a fount of foundational ecological data, the research is leading to a fuller understanding of the outsize role these tiny particles play in the ocean ecosystem.

“The findings are important for model development and predicting what is happening with carbon in the correct direction and at the correct magnitude,” said Ahmed Zayed, a research scientist in microbiology at The Ohio State University and co-first author of the study.

The question of magnitude is a serious consideration when taking into account the vastness of the ocean.

Lead author Matthew Sullivan, professor of microbiology at Ohio State, envisions identifying viruses that, when engineered on a massive scale, could function as controllable “knobs” on a biological pump that affects how carbon in the ocean is stored.

“As humans put more carbon into the atmosphere, we’re dependent on the massive buffering capacity of the ocean to slow climate change. We’re growing more and more aware that we might need to tune the pump at the scale of the ocean,” Sullivan said.

“We’d be interested in viruses that could tune toward a more digestible carbon, which allows the system to grow, produce bigger and bigger cells, and sink. And if it sinks, we gain another few hundred or a thousand years from the worst effects of climate change.

“I think society is basically counting on that kind of technological fix, but it’s a complex foundational science problem to tease apart.”

These RNA viruses were detected in plankton samples collected by the Tara Oceans Consortium, an ongoing global study onboard the schooner Tara of the impact of climate change on the ocean. The international effort aims to reliably predict how the ocean will respond to climate change by getting acquainted with the mysterious organisms that live there and do most of the work of absorbing half the human-generated carbon in the atmosphere and producing half of the oxygen we breathe.

Though these marine viral species don’t pose a threat to human health, they behave as all viruses do, each infecting another organism and using its cellular machinery to make copies of itself. Though the outcome could always be considered bad for the host, a virus’s activities may generate benefits for the environment – for example, helping dissipate a harmful algal bloom.

The trick to defining where they fit into the ecosystem has been developing computational techniques that can coax information about RNA viral functions and hosts from fragments of genomes that are, by genomics standards, small to begin with.

“We let the data be our guide,” said co-first author Guillermo Dominguez-Huerta, a former postdoctoral researcher in Sullivan’s lab.

There were some surprises. While biodiversity tends to broaden in warmer regions near the equator and drop close to the colder poles, Zayed said a network-based ecological interaction analysis showed the diversity of RNA viral species was higher than expected in the Arctic and Antarctic.

“When it comes to diversity, viruses don’t care about the temperature,” he said. “There were more apparent interactions between viruses and cellular life in polar areas. That tells us the high diversity we’re looking at in polar areas is basically because we have more viral species competing for the same host. We see fewer species of hosts but more viral species infecting the same hosts.”

The team used several methodological approaches to identify likely hosts, first inferring the host based on the classification of the viruses in the context of marine plankton and then making predictions based on how quantities of viruses and hosts “co-vary” because their abundances depend on each other. The third strategy consisted of finding evidence of integration of RNA viruses in cellular genomes.

“The viruses we’re studying don’t insert themselves into the host genome, but many get integrated into the genome by accident. When it happens, it’s a clue about the host because if you find a virus signal within a host genome, it’s because at some point the virus was inside the cell,” Dominguez-Huerta said.

While most dsDNA viruses had been found to infect bacteria and archaea, which are abundant in the ocean, this new analysis found that RNA viruses mostly infect fungi and microbial eukaryotes and, to a lesser extent, invertebrates. Only a tiny fraction of the marine RNA viruses infect bacteria.

The analysis also yielded the unanticipated discovery of 72 discernible functionally different auxiliary metabolic genes (AMGs) sprinkled among 95 RNA viruses, which provided some of the best clues as to what kinds of organisms these viruses infect and what metabolic processes they’re trying to reprogram in order to maximize the “fabrication” of viruses in the ocean.

Further network-based analysis identified 1,243 RNA virus species connected to carbon export and, very conservatively, 11 were implied to be involved in promoting carbon export to the bottom of the sea. Of those, two viruses linked to hosts in the algae family were selected as the most promising targets for follow-up.

“Modeling is getting to the point where we can take bags of genes from these large-scale genomic surveys and paint metabolic maps,” said Sullivan, also a professor of civil, environmental and geodetic engineering and founding director of Ohio State’s Center of Microbiome Science.

“I’m envisioning our use of AMGs and these viruses that are predicted to infect particular hosts to actually dial up those metabolic maps toward the carbon we need. It’s through that metabolic activity that we probably need to act.”

This research was supported by the National Science Foundation, the Gordon and Betty Moore Foundation, the Ohio Supercomputer Center, Ohio State’s Center of Microbiome Science, a Ramon-Areces Foundation Postdoctoral Fellowship, Laulima Government Solutions/NIAID and France Génomique. The work was also made possible by the unprecedented sampling and science of the Tara Oceans Consortium, the nonprofit Tara Ocean Foundation and its partners.