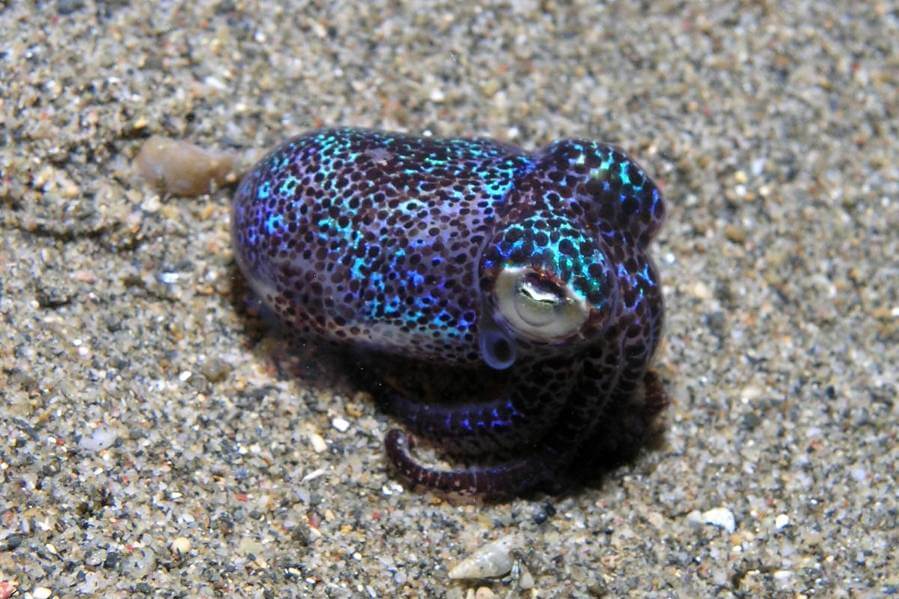 Ocean-dwelling, otherworldly, and intelligent, the bobtail squid possesses a brain that is complex yet very different from our own.

This squishy, walnut-sized creature is a cephalopod (a group that includes octopuses, squids and cuttlefish), the only invertebrate group that has evolved nervous systems and behaviors as complex as what we see in mammals and birds.

By studying the independent evolution of the cephalopod nervous system, researchers like Matt McCoy seek to look past the differences to see common features that could teach us fundamental truths about the evolution of intelligence itself.

McCoy is an Interdisciplinary Postdoctoral Scholar at the Wu Tsai Neurosciences Institute at Stanford where he studies genes important for nervous system evolution.

As part of his PhD work in molecular genetics and genomics, McCoy spent time reprogramming human skin cells into neurons. He noticed that to become neurons, these cells all turned on a distinct class of enormously large genes — sequences of DNA base pairs that go on for 10 or 100 times longer than the average gene. At first, he used this feature to pick out which cells had successfully become neurons, but eventually realized that he might have struck something fundamental about nervous system biology. McCoy has since found that these large genes appear across the tree of life, all the way back to the earliest evolution of nervous systems.

Now, as a postdoctoral researcher in the Stanford lab of Nobel Laureate Andrew Fire, McCoy uses large-scale computational genomics techniques and molecular genetics to study the impact of these large genes on nervous system evolution across a wide range of organisms. He leverages this interdisciplinary approach to generate hypotheses that he can bring to the study of bobtail squid genetics during summers spent at the Marine Biological Laboratory (MBL) in Woods Hole, Massachusetts, an international center for marine research and education where he has been a Grass Fellow and Whitman Fellow.

We spoke with McCoy to learn more about what he is learning about nervous system evolution and function and how these findings may translate to a deeper understanding of human disease.

You study a cephalopod called the bobtail squid. Why study squids?

People call cephalopods alien, because they’re so bizarre, compared to mammals. I think what’s cool about them is that they’re not alien. Our ancestors evolved in the same environments, under many of the same conditions. They did some things in evolution the same way, and other things completely differently.

We shared a common ancestor with cephalopods 600 to 800 million years ago, and independently, we evolved enormous genomes and highly complex nervous systems. Interestingly, if you compare the size of genes in each genome, you’ll see they are also much larger than in closer relatives with less complex nervous systems. I hypothesize that these phenomena are connected – that genes getting large contributes to nervous system complexity. I study squid to try and understand what happened the same way in our independent evolution, and what happened differently, because this could allow us to find fundamental aspects of nervous system evolution.

How did you begin studying large genes in the context of neuroscience?

As a graduate student, I noticed that the largest genes in the genome were expressed in cells I reprogrammed into neurons, and used that as a tool to identify them. But then I started thinking about it as more than just a tool: What if this says something fundamental about neurons? As a postdoc, I hope to focus on the causes — how did these genes become so big — and the consequences — what do these genes teach us about neurons?

What do large genes do in neurons?

Many of them allow neurons to recognize each other and form specific connections. We think that bigger genes, whose products can get shuffled and combined in unique ways, may help produce many distinct neuronal proteins and allow more specific connections to form.

How does the interdisciplinary nature of your work affect the questions you ask?

I’m most excited by areas where the lines between disciplines blur. Particularly at Stanford, there is a boom in genetic and computational techniques, and these are allowing us to look in other fields and ask old questions with new tools. I’m approaching one such question — How complex nervous systems evolved — with tools from neuroscience, genetics, and evolutionary biology. Each field has its own history of questions and the tools that were developed to address them, but there are also hidden assumptions that interdisciplinary research can help uncover and overcome. It’s like that saying, “When all you have is a hammer, everything looks like a nail.” For me it’s very exciting to take a tool from a different field and start looking for questions to ask with it—you start to see there’s a lot of other things out there besides nails!

My work isn’t only across disciplines; it’s also between institutions. The Marine Biological Laboratory at Woods Hole, Massachusetts is critical for my research. They’re pioneering cephalopod mariculture, [the raising and breeding of marine organisms]. They welcome researchers like me to come in and apply our specialties and techniques to these new systems.

What is it like to work with the bobtail squid at the Marine Biological Laboratory (MBL)?

I wake up at 5:30 in the morning, go into their mariculture room, and check for eggs. The squid lay eggs every day on rock arches. I’m there by myself in the morning. The lights are off. I reach into gigantic tanks, pick up a rock arch, and find a clutch of 50 to 100 eggs. Most of the time the squid are sleeping or burying themselves in the sand. Before the MBL had this system down, it was hard to get these eggs.

That’s part of the draw of the MBL: to spend time with animals you would never see anywhere else. Researchers gather from all over the world for a summer every year. The questions people ask are so diverse and new to me. I came from a medical school as a graduate student, and a lot of my prior work was clinical or translational. I’m excited to come to an environment with almost all basic, fundamental biology. Just observing these animals — I find it stunning.

Does your research have a translational component in addition to the basic biology?

Large genes are exposed to more mutations, opening new chances for pathologies. There’s evidence that many neurological disorders have a gene size component.  For example, in Alzheimer’s and other neurodegenerative diseases, we see a mis-regulation of large genes. This may be a marker of something else going on, or it may be causing the disease itself. We don’t know yet. My time as a postdoc has been an opportunity for me to dive deeply into the basic biology of gene size, and this has started uncovering potential entry points into studying and treating disease that I hope to develop in the next stage of my career.

What is it like to go from basic biology at the Marine Biological Laboratory to translational research with a focus on disease?

I’m excited about it. It’s what I hope to do for the rest of my career. Studying biology can and should be useful, with immediate results. It should also be basic and fundamental. I envision always having a dual-pronged approach: finding fundamental aspects of biology and applying them to disease and health. You never know what will be useful — what will transform how we view or treat disease.