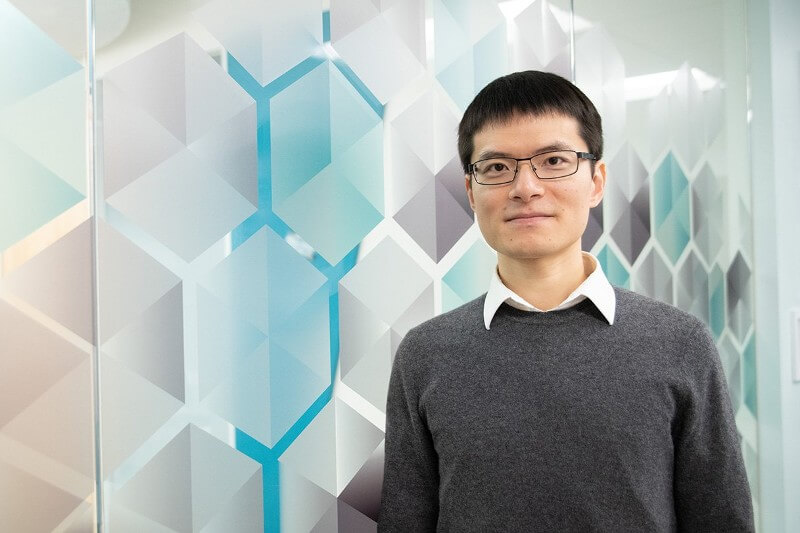 While counting is the first skill a child learns in mathematics, it’s also something studied at the highest levels of the discipline, albeit in a more exciting way.

New professor of mathematics Tony Yue Yu’s research involves counting curves in a geometric space, which places his work in the field of enumerative geometry. One of the earliest examples of enumerative geometry is the Problem of Apollonius, named after a mathematician in ancient Greece. In this problem, one counts the number of circles that are tangent to three given circles in a plane (black in the illustration). There are in general eight such tangent circles; one is shown in pink.

Such questions are not only intuitively appealing, but also practically important because counting geometric objects with certain constraints is the same type of problem as counting the number of solutions to a system of equations.

Yu is developing a new theory of curve counting via what is called non-Archimedean geometry. Typically, when you take two numbers such as 1 and 100, in which one number is less than the other, you can add the lesser number to itself again and again to eventually surpass the greater number (100). This concept stems from work by Archimedes, an ancient Greek mathematician. However, in non-Archimedean geometry, you can keep adding up smaller numbers but you will never surpass the larger number. Yu explains that these “exotic, non-intuitive” numbers are at the heart of his work.

Yu, who grew up in Ningbo, China, completed his undergraduate studies in mathematics at Peking University in 2010, and later completed his graduate studies at the Ecole normale supérieure in Paris. He was a permanent researcher in the French National Centre for Scientific Research until joining the Caltech faculty in 2021.

We met with Yu over Zoom to learn more about his research and how it relates to a concept familiar to physicists known as mirror symmetry.

I have been fascinated by math and science since childhood. Growing up in Ningbo, there were plenty of science activities and competitions for kids, and I enjoyed all of them. I went to Peking University, majoring in mathematics, because in high school I was able to read university textbooks on many other science subjects but couldn’t understand much from the math textbooks. I became very curious about modern mathematics.

Then I went to Ecole normale supérieure in Paris for graduate school. Paris is the birthplace of modern algebraic geometry, founded by Alexander Grothendieck in the 1960s. People like to say that Paris is the center of the fashion world, but it is also a center of mathematical research in many areas. Once in Paris, surrounded by so many mathematicians, it was natural for me to pursue mathematical research.

Can you tell us more about non-Archimedean geometry?

The Archimedean property says that given any two positive numbers A < B, if we add A to itself sufficiently many times, the sum A+ ⋯ +A will eventually exceed B.

You will say that this is obvious because this is how length behaves in our daily life. However, in modern mathematics, there is a great interest to study quantities and geometric spaces where the Archimedean property fails. We call them non-Archimedean numbers and non-Archimedean spaces. In this realm, numbers do not fall on a number line nor represent any notion of distance. They are exotic and don’t match our intuition.

I became interested in the field while I was a graduate student in Paris. One day I asked my advisor what a non-Archimedean space is. He replied that it is some very “hairy” space. I used to think of mathematical objects as austere and solemn, and I couldn’t believe how a geometric space can be hairy like an animal! I became very fascinated by the subject afterward.

Can you tell us more about enumerative geometry?

Enumerative geometry is about counting geometric objects, such as the Problem of Apollonius, in which one counts circles in a plane. While it is fun and important to count and compute the precise numbers, the thrill of the field is to discover deeper structural relations behind these numbers. One of the most mysterious relations is described by so-called mirror symmetry, which is a duality of shapes first discovered by theoretical physicists studying string theory, a mathematical theory that aims to describe the fundamental particles and forces in nature.

Regardless of whether string theory can be proven by experiments, it has made a great impact on mathematical research. In mirror symmetry, the numbers of curves in one space can be related to solutions of differential equations on the mirror space. The full extent of this phenomenon, as well as its underlying mathematical mechanism, are still largely unknown.

What problems are you working on?

I aim to further develop this non-Archimedean approach and hopefully make new contributions to the mathematical foundation of mirror symmetry. It is also important to compare this work with methods studied by other researchers. While mirror symmetry completely revolutionized the field of enumerative geometry, I also look forward to exploring applications of mirror symmetry to broader areas of algebraic geometry, such as moduli theory and birational geometry. Both concern the classification of spaces, and classification has always been a central theme across different areas of mathematics.

Is there anything else you would like to add?

In addition to being the indispensable tool for science and technology, math is also an art. Sometimes you hear a piece of music and you like it. Math has a lot of surprises but requires years of training to fully appreciate.