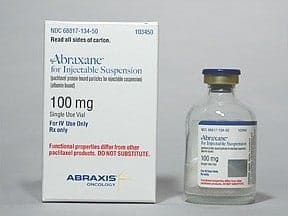 Pancreatic cancer is the fourth leading cause of cancer death in the United States. An estimated 45,220 patients will be diagnosed and 38,460 will die from the disease in 2013, according to the National Cancer Institute. Surgery is the only option to permanently remove or cure pancreatic cancer, but it usually is too late for surgery by the time the cancer is diagnosed.

“Patients with pancreatic cancer are often diagnosed after the cancer has advanced and cannot be surgically removed,” said Richard Pazdur, M.D., director of the Office of Hematology and Oncology Products in the FDA’s Center for Drug Evaluation and Research. “In these situations, and in situations when the cancer has progressed following surgery, options like Abraxane can help prolong a patient’s life.”

The FDA reviewed the new use for Abraxane under the agency’s priority review program, which provides for an expedited review of drugs. Abraxane was also granted orphan product designation for pancreatic cancer because it is intended to treat a rare disease or condition.

Common side effects observed in Abraxane plus gemcitabine-treated participants include a decrease in infection-fighting white blood cells (neutropenia), a low level of platelets in the blood (thrombocytopenia), fatigue, nerve damage in the arms and legs (peripheral neuropathy), nausea, hair loss (alopecia), tissue swelling (peripheral edema), diarrhea, fever (pyrexia), vomiting, rash and dehydration. The most common serious side effects were fever (pyrexia), dehydration, pneumonia and vomiting. Other clinically important serious side effects included bacterial infection of the blood stream (sepsis) and inflammation of the lung tissue (pneumonitis).

Abraxane is also approved to treat breast cancer (2005) and non-small cell lung cancer (2012). It is marketed by Celgene, based in Summit, N.J. Gemcitabine is marketed by Indianapolis-based Eli Lilly.

The FDA, an agency within the U.S. Department of Health and Human Services, protects the public health by assuring the safety, effectiveness, and security of human and veterinary drugs, vaccines and other biological products for human use, and medical devices. The agency also is responsible for the safety and security of our nation’s food supply, cosmetics, dietary supplements, products that give off electronic radiation, and for regulating tobacco products.