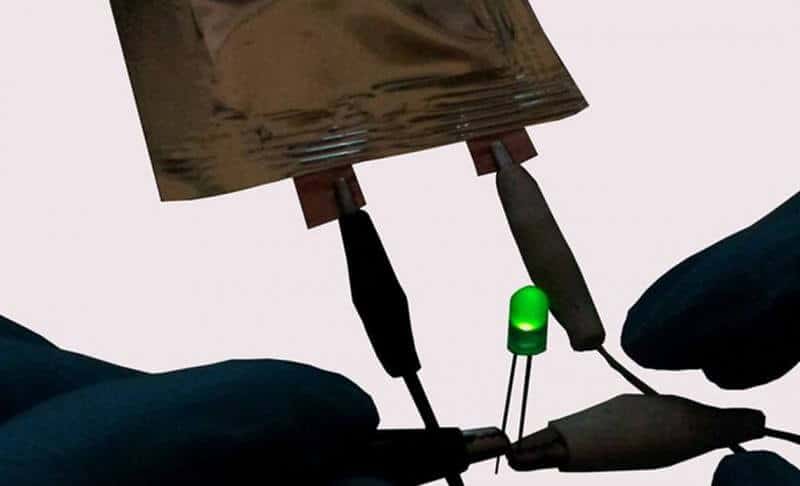 Engineering researchers at Rensselaer Polytechnic Institute have developed a new type of rechargeable lithium battery with components made entirely of carbon. Unlike the lithium-ion batteries currently sold around the world to power smart phones, laptops, and countless other devices, this new battery is made without the toxic metal cobalt.

The new technology, detailed in a research paper published this week in the journal Nature Communications, pairs an anode and cathode made from the nanomaterial graphene with metallic lithium to create an energy storage device. This research could lead to a new generation of batteries with significantly higher energy density, and that are nontoxic, easy to manufacture, and inexpensive to recycle.

“In this study, we show how to make a new type of battery using graphene, as well as an unlikely component – metallic lithium,” said Nikhil Koratkar, the John A. Clark and Edward T. Crossan Professor of Engineering at Rensselaer, who led the study. “Metallic lithium is avoided in lithium-ion batteries due to its tendency to form dendrites which are considered unsafe, but we show that metallic lithium trapped within a porous graphene structure is safe and does not form dendrites. The result is an all-carbon lithium battery that offers up to three times higher energy density than conventional batteries. It is also more environmentally friendly, and with its simplified chemistry could be easier and less expensive to mass produce.”

Lithium battery technology dates back to the 1970s, and some of the very first iterations used a metal lithium cathode. Energy is stored by moving lithium ions back and forth between the battery’s cathode and an anode made of graphite. This results in a flow of electrons, which is harvested and put to use as electricity.

As the lithium gets cycled back and forth between the anode and cathode, it would settle and form dendrites — small, sharp towers on the cathode surface — that over time grow in size and eventually pierce the membrane separating the cathode and anode, causing the battery to fail. Even though lithium metal has an attractive energy density, this shortcoming led to serious safety concerns. As a consequence, the battery industry has avoided the use of metallic lithium and has resorted to storing elemental lithium in a matrix material such as cobalt-oxide or iron-phosphate. Atoms of cobalt or iron in the matrix bond with lithium and prevent lithium metal from forming, thereby solving the dendrite issue.

In most lithium-ion batteries sold today, the cathode is made from lithium cobalt oxide and the anode is made from graphite, comprised of many ultra-thin layers of graphene. When charging, lithium ions seek out the edges of the anode, and work their way inside between the layers of graphene. This process, called intercalation, creates no bonds between the elemental lithium or between the lithium and graphene, which limits the energy density of the overall battery.

In place of graphite, Koratkar and his research team developed an anode made from thermally shocked graphene. This process is a way to intentionally create cracks, holes, voids, and other defects in the graphene. In previous studies, the researchers have shown that these defects enable lithium ions to more rapidly make their way into the anode, leading to shorter charge times.

In this study, however, they looked at the interaction of elemental lithium with such defect sites in the graphene. They found that lithium ions are strongly attracted to defect sites, which creates a very high local concentration of lithium near the defects. This initiates the formation, or “plating,” of metallic lithium at the defect sites, which significantly increases the energy density of the battery. Such graphene-lithium metal composites can be used as the cathode, eliminating the need for toxic metals or complicated chemistries associated with lithium cobalt oxide or lithium iron phosphate.

However, what surprised the research team was that even after thousands of charge-recharge cycles, as the metallic lithium transitioned back and forth between the anode and cathode, no significant dendrites formed.

“We discovered that the porous graphene network acts as a caged entrapment for lithium metal that prevents dendritic growth, facilitating extended cycling of the electrode,” Koratkar said. “The result is a device with excellent energy density and stable performance. We are excited about its potential as a new type of battery.”

When compared to traditional graphitic anodes and conventional lithium cobalt oxide cathodes, the new graphene-lithium metal composite electrode provides higher charge storage capacity and up to three times higher energy density. Extended testing for over 1,000 charge-discharge cycles showed highly stable performance. Importantly, even after 1,000 cycles there was no indication of any significant dendritic structures, since the lithium metal is caged within the pores of the porous graphene network structure. To demonstrate the concept, the researchers built a cell using graphene electrodes and used it to power a commercial LED device.

Along with Koratkar, co-authors of the paper are: graduate students Rahul Mukherjee, Abhay Thomas, and Eklavya Singh, and visiting scientist Osman Eksik, of the Rensselaer Department of Mechanical, Aerospace, and Nuclear Engineering; graduate student Dibakar Datta of Brown University; and postdoctoral scientist Junwen Li and Professor Vivek Shenoy of the University of Pennsylvania.

Koratkar’s graduate student and first author of the paper, Mukherjee, was a finalist in the 2014 MIT-Lemelson National Collegiate Student Prize Competition in the graduate student category and presented his research at the Massachusetts Institute of Technology earlier this month. With fellow student Eklavya Singh, Mukherjee won the “best of the best” grand prize at the spring 2014 Change the World Challenge competition at Rensselaer.

This research was supported by the National Science Foundation, as well as the John A. Clark and Edward T. Crossan Professorship at Rensselaer, and a Bob Buhrmaster ’69 grant from the Severino Center for Technological Entrepreneurship and Lally School of Management at Rensselaer.