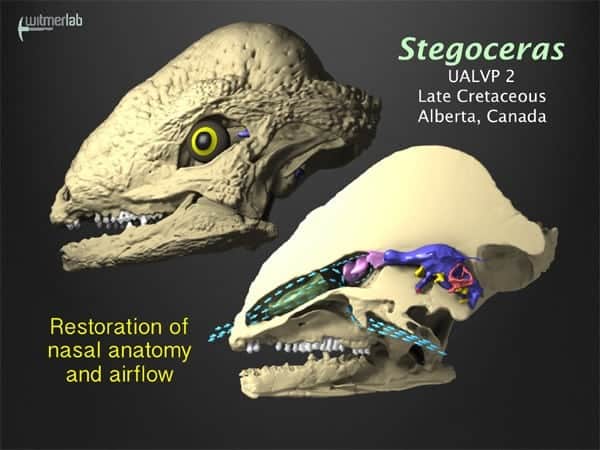 It’s been millions of years since T. rex took its last breath, but a team led by Ohio University scientists is breathing life back into dinosaurs using high-powered computer simulations to model airflow through dinosaur snouts. The research has important implications for how dinosaurs used their noses to not only breathe but to enhance the sense of smell and cool their brains.

“Dinosaurs were pretty ‘nosy’ animals,” said Ohio University doctoral student Jason Bourke, lead author of the new study published today in the Anatomical Record. “Figuring out what’s going on in their complicated snouts is challenging because noses have so many different functions. And it doesn’t help that all the delicate soft tissues rotted away millions of years ago.”

To restore what time had stripped away, the team turned to the modern-day relatives of dinosaurs—birds, crocodiles and lizards—to provide clues. “We’ll do whatever it takes,” said Lawrence Witmer, professor in the Ohio University Heritage College of Osteopathic Medicine and principal investigator on the National Science Foundation’sVisible Interactive Dinosaur Project, which funded much of the research. “We did lots of dissections, blood-vessel injections and CT scanning, but a major new tool was 3D computer simulation of airflow.”

Bourke drew from a branch of engineering called computational fluid dynamics, an approach commonly used in the aerospace industry and medicine, to model how air flowed through the noses of modern-day dinosaur relatives such as ostriches and alligators. “Once we got a handle on how animals today breathe,” Bourke said, “the tricky part was finding a good candidate among dinosaurs to test our methods.”

The dinosaurs that best fit the bill were the pachycephalosaurs, or “pachys,” a group of plant-eating dinosaurs best known for the several-inch-thick bone on the tops of their skulls which is thought to have served both as a visual display and as protection for head-butting behaviors like those of modern-day rams. It turns out that building all that extra skull bone resulted in ossifying soft tissues in other areas of the body—such as the nose.

“When we cleaned up the fossil skull of Sphaerotholus, a pachy from North Dakota, we didn’t expect to see these delicate scrolls of bone in the nasal region. We knew they must be nasal turbinates,” said Emma Schachner, a co-author on the study from Louisiana State University who, along with Tyler Lyson of the Denver Museum of Nature and Science, studied some of the fossil specimens used in the study. Similar structures were found in a different pachy species from Canada called Stegoceras by co-author Phil Bell from the University of New England in Australia.

The first nasal turbinates to be discovered were in the back part of the nasal cavity, called the olfactory chamber, where smelling takes place. Work by Witmer and Ohio University researcher Ryan Ridgely on CT scans of Stegocerasshowed that the olfactory region of the brain was quite large, which, along with the large olfactory turbinates, suggested that Stegoceras had a good sense of smell.

But when Bourke ran his airflow simulation analyses, the inspired air bypassed the olfactory chamber. “It made no sense,” Bourke said. “Stegoceras obviously had a pretty decent sense of smell, but the odors weren’t reaching where they needed to go. We obviously were missing a piece of the puzzle.”

When Bourke digitally inserted respiratory turbinates of different shapes—whether it was the scrolled turbinate of a turkey or the branched turbinate of an ostrich—the computer airflow simulations started to make more sense.

“Some of the restored airflow patterns now carried odors to the olfactory region,” said Bourke. “We don’t really know what the exact shape of the respiratory turbinate was in Stegoceras, but we know some kind of baffle had to be there. We have the smoking gun of the bony ridge on the fossil, and the airflow analyses show that attaching some kind of turbinate produced the only airflow that made any real biological sense.”

Why have turbinates at all? Some scientists had previously suggested that warm-blooded animals such as birds and mammals have turbinates to act like condensers to save water that might have been lost during exhalation. That may be true in some cases, but this new research suggests that turbinates also have important functions as baffles to direct air to the olfactory region. But they might also play another critical role—cooling the brain.

Study co-author Ruger Porter, another Ohio University doctoral student, has been studying the pattern of blood flow in pachycephalosaurs and other dinosaurs, as well as their modern-day relatives. “The fossil evidence suggests that Stegoceras was basically similar to an ostrich or an alligator,” Porter said. “Hot arterial blood from the body was cooled as it passed over the respiratory turbinates, and then that cooled venous blood returned to the brain. It may not have been much of a brain, but you don’t want it cooked!”

Now that Bourke and his team have worked out nasal airflow in the “easy case” of Stegoceras, the team is turning its attention to trickier dinosaur cases, such the crazy-straw airways of armored ankylosaurs and duckbilled hadrosaurs.

The research was funded by National Science Foundation grants to Witmer and Ridgely and a fellowship to Bourke, as well as by the Ohio University Heritage College of Osteopathic Medicine.

More information about this study (including additional images, animations and fact sheets) is available at the WitmerLab site: http://www.oucom.ohiou.edu/dbms-witmer/pachy_airflow.htm.