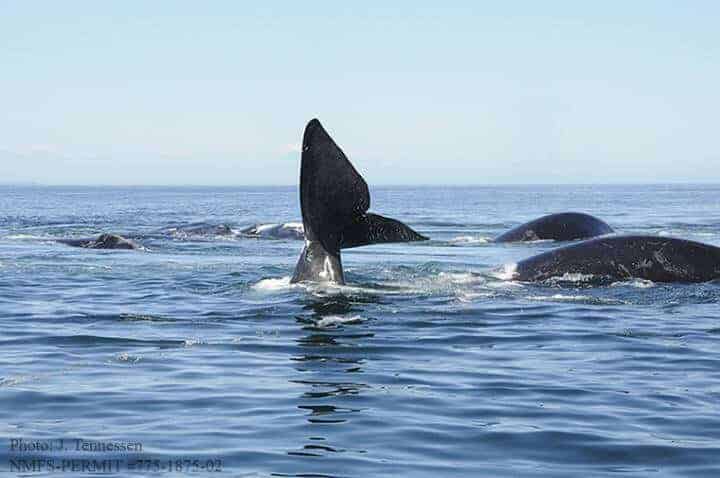 Human beings have unique voices — from the deep, resonating bass of James Earl Jones to the raspy melodies sung by Broadway star Carol Channing — and we routinely recognize individuals based solely on the way they sound, for example over the telephone, on a music CD or in an animated film. The same theory that explains individual differences in human speech has recently been applied to other members of the animal kingdom, including dogs and deer. Now researchers from Syracuse University in New York are working to understand whether individually distinctive vocal characteristics of North Atlantic right whales could be used to identify and track individuals — a potentially useful tool for studying an endangered species that spends much of its life hidden under the water.

In an initial study, the scientists were able to correctly distinguish 13 different individual whales based on a combination of vocal characteristics, including length of the calls and the fundamental and harmonic frequencies. The team will present their results at the 169th meeting of the Acoustical Society of America, held May 18-22, 2015 in Pittsburgh.

North Atlantic right whales feed on tiny zooplankton in shallow waters off the east coast of the United States and Canada. For centuries whalers hunted the animals, and even after achieving some measures of protection in the 1930s, the population has remained critically endangered. Current estimates put the number of North Atlantic right whales at around 450 individuals.

Right whales make about a half-dozen different types of calls. The Syracuse researchers looked specifically at the characteristics of the “upcall,” a vocalization that lasts about 1-2 seconds and rises in frequency from around 100 Hz to 400 Hz, at the low end of frequencies audible to human ears. The upcall is the most commonly produced call among all ages and sexes of right whales. The whales likely use the calls to announce their presence and “touch base” with other whales.

Jessica McCordic, a masters student in the biology department at Syracuse University, along with her advisor, biology professor Susan Parks, analyzed more than a decade of archived acoustic data gathered from suction cup sensors attached to the backs of individual right whales in Cape Cod Bay, off Massachusetts; the Bay of Fundy, in Canada; and along the southeast coast of the United States.

Based on the characteristics that distinguish human voices, McCordic initially thought the emphasized harmonic frequencies of the upcalls, called formants, would best distinguish individual whales.

“What I found was that there actually wasn’t much difference in the formants, but one of the variables that came out as most important in discriminating the individuals was the duration of the call,” McCordic said.

In the end, the team found that analyzing a combination of variables, including the formant, the duration of the calls, and the rate of the fundamental frequency change, could distinguish between the upcalls of the 13 individual whales identified in the archival data set.

“The analysis classified the whales well above chance levels, so that was really exciting,” McCordic said.

McCordic said the next step in the research is to see whether the same analytic approach can tell individual right whales apart in the wild using stationary hydrophones installed across their habitat range — a monitoring technique that could yield valuable data to help protect the endangered species.

Presentation 1aAB1, “Individually distinctive parameters in the upcall of the North Atlantic right whale” by Jessica A. McCordic and Susan E. Parks, is at 8:30 a.m. on Monday, May 18 in the Rivers room. The abstract can be found by searching for the presentation number here: https://asa2015spring.abstractcentral.com/planner.jsp