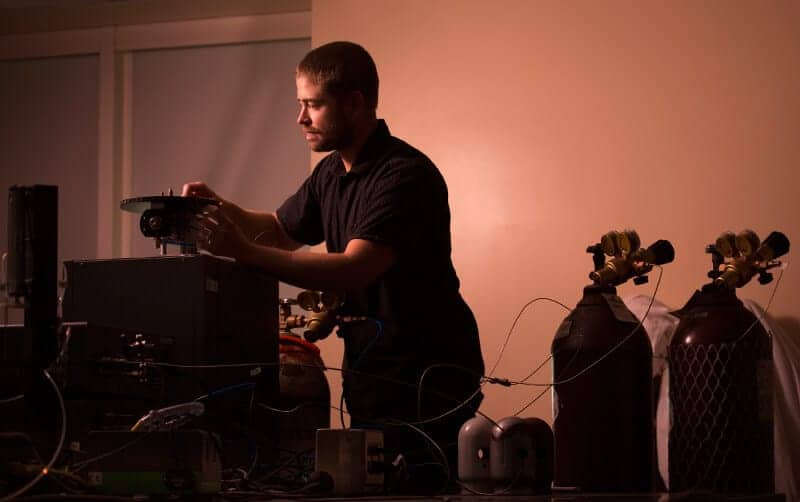 Imagine tiny bubbles of methane — a potent greenhouse gas — rising from the ocean floor, escaping into the atmosphere, playing havoc in heating up the planet and contributing to global warming and climate change.

Yet certain rocks on the depths of the ocean floor host an interesting microbiological community, where microscopic organisms, or microbes, actually eat escaping methane to acquire energy … and thrive.

“These methane-munching microbes are saving us from a greenhouse gas that causes climate change,” said Sean Loyd, Cal State Fullerton assistant professor of geological sciences. “Microbes consume the methane and prevent it from ever reaching the atmosphere — almost like a lid — and are a ‘natural solution’ to climate change.”

Loyd is the lead author of a new study published in Nature Communications that offers scientists insights into the relationships among methane, microbes and rocks, such as how microorganisms convert the methane into limestone, limiting the amount released into the atmosphere. The study also focuses on how rocks can preserve evidence of ancient methane-consuming microbial communities.

Both methane and carbon dioxide in the atmosphere absorb energy from sunlight and “hold it” as heat, resulting in increasing temperature and causing global warming, Loyd added.

The multi-institutional study explores how certain rocks form as a byproduct of microbes in these marine environments, resulting from the destruction of methane, which is produced by the breakdown of the remains of marine organisms.

Loyd analyzed rock samples — up to 130 million years old — some of which are forming near methane seeps in coastal shelves near Costa Rica and Norway, as well as off the Washington, Oregon and California coasts. He used these data to characterize how the rocks formed and discovered another type of chemical clue preserved in the rocks that indicate the presence of these methane-eating organisms.

The study is important from another societal standpoint since methane is a valuable energy source and is a widely exploited natural gas for residential, commercial and industrial uses. In environments where methane is seeping out, it can be lost into the oceans. But, Loyd explained, this gas could be trapped and recovered and used by industry and the public.

The research also may have broader scientific relevance since some scientists believe that life may have evolved or originated in these methane-fueled ecosystems.

“In other words, billions of years ago, life may have originated in an environment similar to that explored in this study,” he said.

Loyd began his study five years ago as a postdoctoral student at UCLA, where he received a grant from the Agouron Institute to pursue his research. The resulting study also included collaborators from UCLA; Caltech; University of California, Riverside; Northern Arizona University; Oregon State; University of Washington; and the University of Bergen in Norway.

1 thought on “Methane-Eating Microorganisms: A Solution to Climate Change?”