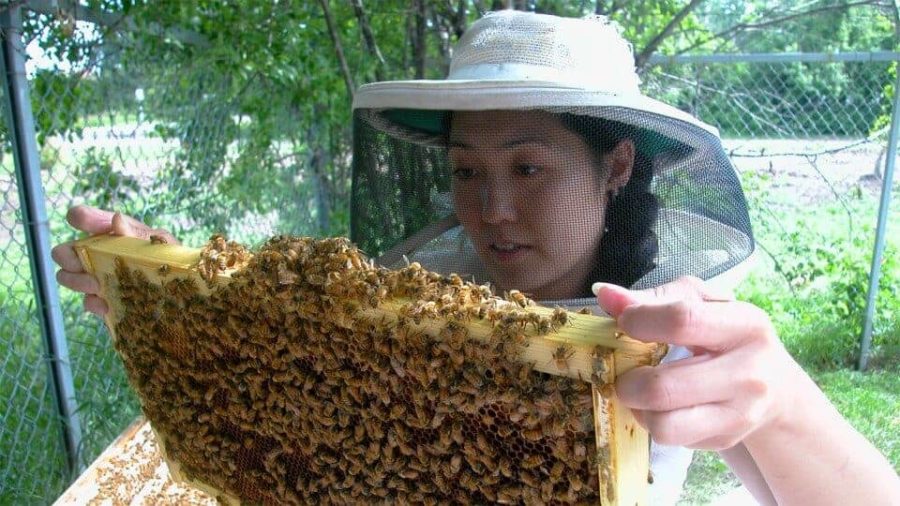 The world’s best-selling insecticide may impair the ability of a queen honey bee and her subjects to maintain a healthy colony, says new research led by a University of Nebraska-Lincoln entomologist.

The research examined the effects of imidacloprid, which belongs to a popular class of nicotine-based insecticides known as neonicotinoids. Honey bees often become exposed to neonicotinoids in the process of pollinating crops and ornamental plants while foraging for the nectar and pollen that feed their colonies.

Queen bees in colonies that were fed imidacloprid-laced syrup laid substantially fewer eggs – between one-third and two-thirds as many, depending on the dose of imidacloprid – than queens in unexposed colonies, the study reported.

“The queens are of particular importance because they’re the only reproductive individual laying eggs in the colony,” said lead author Judy Wu-Smart, assistant professor of entomology. “One queen can lay up to 1,000 eggs a day. If her ability to lay eggs is reduced, that is a subtle effect that isn’t (immediately) noticeable but translates to really dramatic consequences for the colony.”

Wu-Smart and her colleague, the University of Minnesota’s Marla Spivak, assessed colonies populated by 1,500, 3,000 and 7,000 honey bees. Some colonies received normal syrup, with others given syrup that contained imidacloprid in doses of 10, 20, 50 and 100 parts per billion, or PPB.

Colonies that consumed the imidacloprid also featured larger proportions of empty cells, the signature hexagonal hollows that serve as cribs for honey bee broods. About 10 percent of cells in the unexposed colonies were vacant, compared with 24, 31, and 48 percent of the 20, 50 and 100 PPB colonies, respectively. The finding suggests poor brood health in the exposed colonies, Wu-Smart said.

The researchers further found that exposed colonies collected and stored far less pollen, which they convert into a “bee bread” that provides crucial protein for recently hatched larvae. While more than four percent of the cells in unexposed hives contained pollen, less than one percent of cells in even the 10 PPB colonies did.

And the honey bee equivalent of biohazard containment – the removal of mite-infested or diseased pupae before they can infect the hive – also suffered. An unexposed colony of 7,000 bees removed more than 95 percent of the ailing brood, but a 100 PPB colony eliminated only 74 percent and a 50 PPB colony just 63 percent. Wu-Smart said this reduction in hygienic behavior indicates that the exposed colonies could be more susceptible to pests and pathogens.

Yet Wu-Smart and Spivak also discovered that some of the insecticide’s apparent effects, such as decreasing the amount of time a queen spent moving through the hive or the number of worker bees foraging for food, dissipated as the size of a colony increased.

“What we can say is that smaller colonies tend to be more vulnerable, because the queens are more likely to become exposed,” Wu-Smart said. “When we look at our general beekeeping practices, the early spring is when colonies are at their smallest size. They’re coming out of winter, and a lot of them are naturally smaller.”

Unfortunately, Wu-Smart said, growers typically apply insecticides or sow insecticide-treated seeds at that same time. Even imidacloprid-treated crops that bees typically do not pollinate, such as corn, can contribute to exposure when winds sweep up the dust stirred by planting machines and carry it across miles of landscape. That dust can settle in willow trees, dandelions, clovers and other flowering plants that represent food sources for honey bees.

Though Wu-Smart said she doesn’t consider banning neonicotinoids a practical step in protecting honey bee colonies, she did advocate for regulating insecticide-treated seeds the same way the industry does with sprays and other application techniques.

“When you spray a pesticide, you have to consider things like wind and temperature to reduce drift,” she said. “You can’t aerial-spray on a windy day. With seed-treated products, there is no label telling (growers) that it’s been treated with an insecticide. There is no restriction as to when you can plant.

“When we do a lot of the extension outreach and talking to growers, many of them are unaware that this is even a problem. So just having that label on the bag saying that planting these seed treatments on a windy day could potentially cause some effects on bees could be useful.”

“What we’re seeing now is that beekeepers will … check their hives, say that the hives look good, come back a few weeks later, and (see) the colony start to look really weak,” she said. “They’ll come back (again), and the colony is dead or dying. So it’s a slow decline of their colony health.

“In many of these cases, we want to figure out why these colonies are dwindling when they should be at their peak production. This is providing some of that insight. It’s not answering all the questions, but it’s definitely something to consider.”

Wu-Smart and Spivak published their findings in the journal Scientific Reports. The research was supported in part by a fellowship Wu-Smart received from the U.S. Environmental Protection Agency.