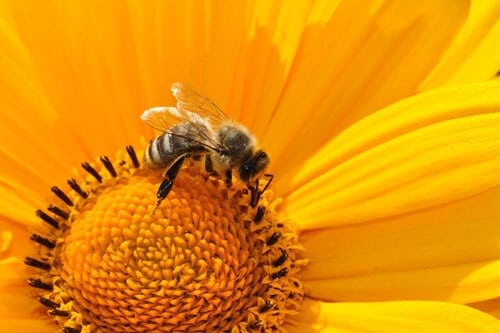 Scientists from the University of Bristol have discovered that bumblebees have the ability to use ‘smelly footprints’ to make the distinction between their own scent, the scent of a relative and the scent of a stranger.

And by using this ability, bees can improve their success at finding good sources of food and avoid flowers that have already been visited and mined of nutrients by recognising who has been there previously.

Richard Pearce from the School of Biological Sciences, led the study alongside colleagues Dr Sean Rands and Dr Luca Giuggioli.

He said: “Bumblebees secrete a substance whenever they touch their feet to a surface, much like us leaving fingerprints on whatever we touch.

“Marks of this invisible substance can be detected by themselves and other bumblebees, and are referred to as scent-marks.

“We performed three separate experiments with bumblebees, where they were repeatedly exposed to rewarding and unrewarding flowers simultaneously that had footprints from different bees attached to them.”

Each flower type either carried scent-marks from bumblebees of differing relatedness (either their own marks, sisters from their nest, or strangers from another nest), or were unmarked.

They discovered that bees were able to distinguish between these four different flower types, showing that not only can bees tell the marks of their own nest mates from strangers, but also that they can discriminate between the smell of their own footprints and those of their nest mate sisters.

Richard Pearce added: “This is the first time it has been shown that bumblebees can tell the difference between their scent and the scent of their family members. This ability could help them to remember which flowers they have visited recently.

“Bumblebees are flexible learners and, as we have discovered, can detect whether or not it is they or a different bumblebee that has visited a flower recently. These impressive abilities allows them to be cleverer in their search for food, which will help them to be more successful.”

This work, published today in Scientific Reports, was funded by the EPSRC, through the Bristol Centre for Complexity Science.

‘Bumblebees can discriminate between scent-marks deposited by conspecifics’ by R. Pearce, S. Rands and L. Giuggioli in Scientific Reports.