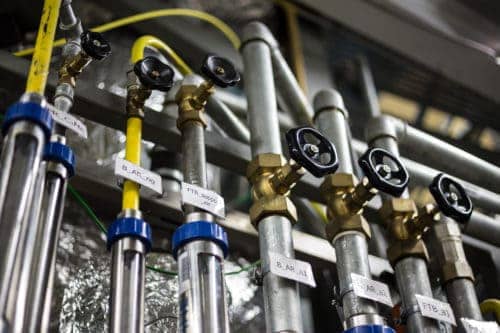 How can we burn natural gas without releasing CO2 into the air? This feat is achieved using a special combustion method that TU Wien has been researching for years: chemical looping combustion (CLC). In this process, CO2 can be isolated during combustion without having to use any additional energy, which means it can then go on to be stored. This prevents it from being released into the atmosphere.

The method had already been applied successfully in a test facility with 100 kW fuel power. An international research project has now managed to increase the scale of the technology significantly, thus creating all the necessary conditions to enable a fully functional demonstration facility to be built in the 10 MW range.

Isolating CO2 from other flue gases
It is much cleaner to burn natural gas than to burn crude oil or coal. However, natural gas has the huge disadvantage that it generates CO2 during combustion, which has a detrimental effect on the climate. The CO2 is usually part of the flue gas mixture, together with nitrogen, water vapour and other substances. In this mixed form, the CO2 can neither be stored nor feasibly recycled.

“In the facilities we are working with, however, the combustion process is fundamentally different,” explains Stefan Penthor from the Institute of Chemical Engineering at TU Wien. “With our combustion method, the natural gas does not come into contact with the air at all, because we divide the process into two separate chambers.”

A granulate made of metal oxide circulates between the two chambers and is responsible for transporting oxygen from air to fuel: “We pump air through one chamber, where the particles take up oxygen. They then move on to the second chamber, which has natural gas flowing through it. Here is where the oxygen is released, and then where flameless combustion takes place, producing CO2 and water vapour,” explains Penthor.

The separation into two chambers means there are two separate flue gas streams to deal with too: air with a reduced concentration of oxygen is discharged from one chamber, water vapour and CO2 from the other. The water vapour can be separated quite easily, leaving almost pure CO2, which can be stored or used in other technical applications. “The large-scale underground storage of CO2 in former natural gas reservoirs could be very significant in the future,” believes Stefan Penthor. The United Nations Intergovernmental Panel on Climate Change (IPCC) also sees underground CO2 storage as an essential component of any future climate policy. However, CO2 can only be stored if it has been separated as pure as possible – just as it is with the new CLC combustion method.

By separating the two flue gas streams, there is no longer any need to scrub the CO2 from the flue gas, thus saving a great deal of energy. Despite all this, electricity is generated in the usual way and the amount of energy released is exactly the same as that produced when burning natural gas in the conventional manner.

Successfully scaled up
Several years have passed since TU Wien was first able to demonstrate on a test facility that the CLC combustion method works. Now the big challenge was to redesign the process so it could be transferred to large-scale installations that would also be economically viable. Not only did the entire facility design have to be revised, new production methods for the metal oxide particles had to be developed too. “You need many tonnes of these particles for a large facility, so the economic feasibility of the concept depends significantly on being able to produce them easily and to a sufficiently high degree of quality,” says Stefan Penthor.

The SUCCESS research project has been working on issues like this one for three and a half years now. TU Wien has coordinated the project, involving 16 partner establishments from across the Europe, and between them, the group has managed to resolve all the important technical questions. The revised facility design was based on two fluidised bed technology patents held by TU Wien. “We’ve reached our goal: we’ve developed the technology to such a degree that work on a demonstration facility in the 10 MW range can begin any day now,” says Stefan Penthor. However, that next step is not one for the research institutes; what is needed now are private or public investors. The technology’s success will also depend on political will and on the prevailing conditions within the energy industry of the future. Additionally, this next step is also important because it is the only way to gain the experience necessary to be able to use the technology on an industrial scale in the long term.

In the meantime, the TU Wien research team has already set its sights on its next scientific goal: “We want to develop the method further so it can burn not just natural gas, but biomass too,” says Penthor. “If biomass were combusted and the CO2 separated out, not only would that be a CO2-neutral process, it would even reduce the total amount of CO2 in the air. So you could produce energy and do something good for the global climate at the same time.”