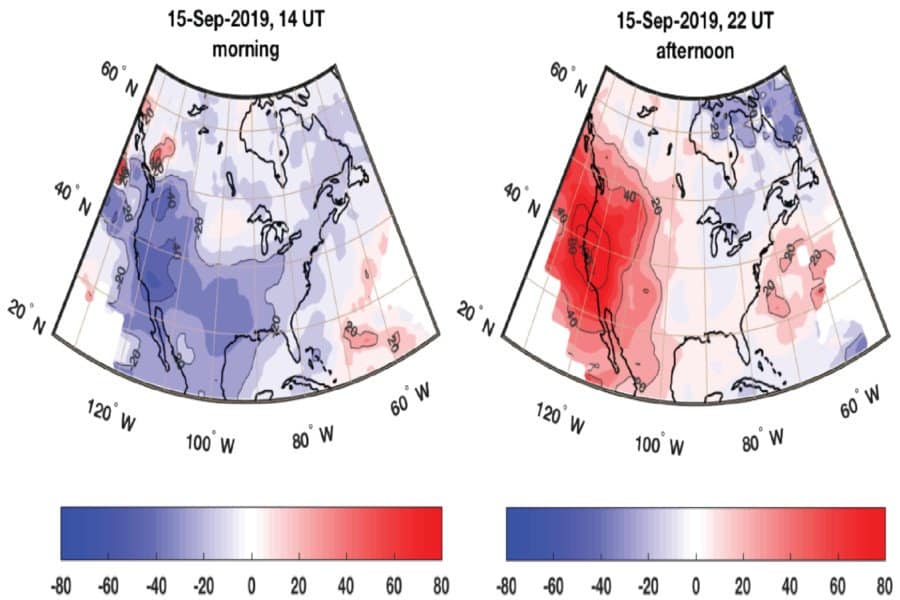 Weather is a tricky science — even more so at very high altitudes, with a mix of plasma and neutral particles.

In sudden stratospheric warmings (SSWs) — large meteorological disturbances related to the polar vortex in which the polar stratosphere temperature increases as it is affected by the winds around the pole — the polar vortex is weakened. SSWs also have profound atmospheric effects at great distances, causing changes in the hemisphere opposite from the location of the original SSW — changes that extend all the way to the upper thermosphere and ionosphere.

A study published on July 16 in Geophysical Research Letters by MIT Haystack Observatory’s Larisa Goncharenko and colleagues examines the effects of a recent major Antarctic SSW on the Northern Hemisphere by studying changes observed in the upper atmosphere over North America and Europe.

In an SSW-caused anomaly, changes over the pole cause changes in the opposite hemisphere. This important interhemispheric linkage was identified as drastic shifts at altitudes greater than 100 km — for example, in total electron content (TEC) measurements as well as variations in the thermospheric O/N2 ratio.

In September 2019, an extreme, record-breaking SSW event occurred over Antarctica. Goncharenko and colleagues found significant resulting changes in the upper atmosphere in mid-latitudes over the Northern Hemisphere following this event; more observations are available for this region than in the Southern Hemisphere. The changes were notable not only in severity, but also because they are limited to a narrow (20–40 degrees) longitude range, differ between North America and Europe, and persist for a long time.

In the figure above, red areas show where TEC levels are shifted over North America and Europe in the afternoon; red indicates an increase of up to 80 percent versus the baseline regular levels, and blue indicates a decrease of up to –40 percent versus regular levels. This TEC shift persisted throughout September 2019 over the western United States, but was short-lived over Europe, indicating different mechanisms at play.

The authors suggest that a change in the thermospheric zonal (east–west) winds are one reason for the variance between regions. Another factor is differences in magnetic declination angles; in areas with greater declination, the zonal winds can more efficiently transport plasma to higher or lower altitudes, leading to the build-up or depletion of plasma density.

More study is needed to determine the precise extent to which these factors affect the linkage between polar stratospheric events and near-Earth space in the opposite hemisphere. These studies remain a challenge, given the relative rarity of Antarctic SSWs and sparse availability of ionospheric data in the Southern Hemisphere.