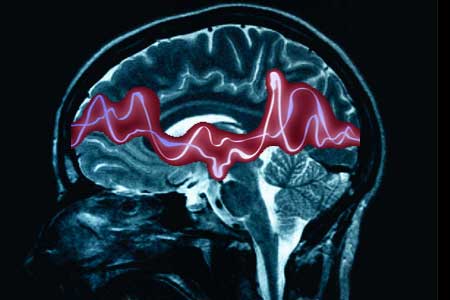 Damage to a part of the brain that regulates hyperactivity can contribute to both memory problems and seizures in the most common form of epilepsy, according to research at the University of Wisconsin–Madison.

The study, published recently in the Journal of Neuroscience, may lead to earlier diagnosis of epilepsy and possibly new ways to treat epilepsy and other disorders that share symptoms, like Alzheimer’s disease, traumatic brain injury and autism spectrum disorder.

Temporal lobe epilepsy, marked by seizures in the brain’s centers for learning and memory, affects more than half of the 3.4 million people in the U.S. diagnosed with epilepsy. One part of the temporal lobe, called the dentate gyrus, has long been suspected to work as a gate — helping to manage brain activity by getting choosy about which patterns of brain cells are active and which are silenced.

“You can think of each pattern as representing one memory,” says Antoine Madar, now a postdoctoral researcher at the University of Chicago, who conducted the research while earning his doctorate at UW­–Madison in the lab of neuroscience Professor Matt Jones. “One pattern represents the first time you visited an art museum. Another, similar pattern is going to represent the second time you went to the museum.”

The unique features of each memory may be subtle — from the specific art you admired, different friends along for the experience or even the time of day — but they are important for guiding specific recollections. Researchers like Madar suspected the dentate gyrus helps to discriminate between similar memories, withholding all but the appropriate patterns to prevent confusion.

“In epilepsy, there is this huge rewiring of the dentate gyrus. Some cells die, some new neurons and new connections between neurons are added in the wrong places” Madar says. “It’s a dramatic difference from a healthy dentate gyrus.”

This rewiring, along with molecular changes inside each cell, allows seizures to develop. But it’s unclear what effect this reorganization of the dentate gyrus has on memory.

With the help of UW–Madison neurologists Bruce Hermann and Rama Maganti, the researchers studied patients in the UW School of Medicine and Public Health’s Epilepsy Monitoring Unit, asking them to take image recognition tests. These tests revealed the trouble they had discriminating between similar memories relative to healthy people of similar age and gender.

The researchers also studied a mouse model of epilepsy and tested their memory by releasing them repeatedly into an arena with a pair of identical objects. Each time a mouse returned to the arena, one of the objects had been moved to a different location.

“Normal mice noticed and acted like something was different. They spent extra time exploring the object that was in a new location,” says Jones, whose work is supported by the National Institutes of Health. “Mice with epilepsy explored, but they did not show a preference for any object; they behaved as if nothing had changed, confusing the new situation with their memory of the old one.”

Looking for the cause of that confusion, Madar examined brain tissue taken from the mice that had undergone memory testing. With a series of specific electrical pulses, he stimulated the nerve fibers that serve as inputs to the dentate gyrus and recorded the patterns of neuronal activity at the output of the dentate gate.

In healthy mice, similar input patterns were transformed by the dentate gyrus network into easily distinguishable patterns of output activity. The input patterns simulated different but similar memories. In epileptic mice, that process was broken. A subset of the neurons was not doing its job to separate patterns. Instead of transmitting a single impulse from Madar’s electrodes, the epileptic neurons would pass along bursts of pulses.

“We wonder if the same deficits in dentate gyrus function that cause memory problems are simultaneously causing susceptibility to these seizures,” Jones says. “That abnormal activity leads to over-excitation, and that’s how seizures happen.”

The new study, which received support from the Madison-based Lily’s Fund for Epilepsy Research, improves our understanding of the mechanisms of memory, linking the biological function of the dentate gyrus and the ability to avoid memory confusion. This could lead to better care for patients with epilepsy and similar disorders that feature memory impairments or seizures, especially if the new findings help researchers differentiate between brain cells that are damaged and those that retain normal function.

“Identifying markers to specifically target pathological neurons could allow treatment of both seizures and memory symptoms with fewer side effects than current anti-seizure drugs,” Madar says.

Because memory problems often precede the seizure that leads to an epilepsy diagnosis, they could be used to diagnose patients earlier.

“Take a person who’s had a head injury: They could evaluate their own memory regularly, using inexpensive and noninvasive computer-based tests like we used,” Jones says. “If they start showing progressive deficits, a clinician could propose treatment to make sure they never have a first seizure.”