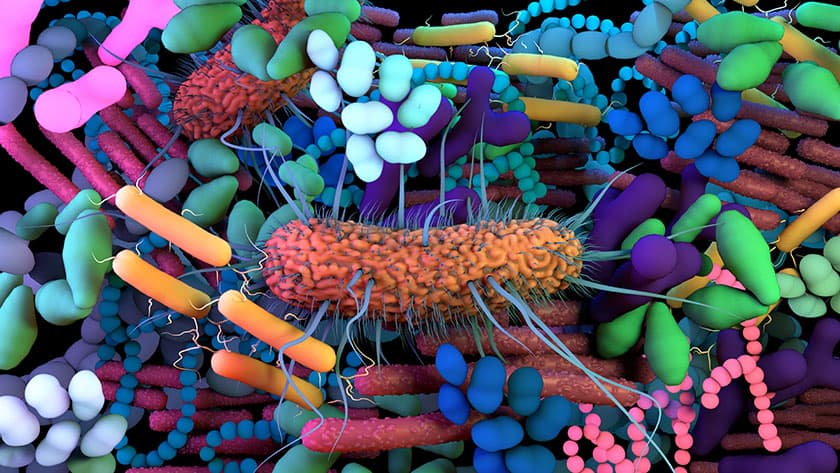 Inside the gut live billions of health-promoting bacteria, collectively called the gut microbiome. They act like a giant chemical factory that produce a wealth of different substances that pass through the intestinal wall, enter into the blood circulation and from there affect the body’s cells in different ways.

Now a European research team consisting of scientists from France, Germany and Denmark has shown the different ways that common medicines apparently affect gut bacteria. The work is published in the prestigious journal Nature.

“It has already been substantiated in various clinical trials that different kinds of food can both positively and negatively regulate the gut’s ‘chemical factory’. We have now taken the next step and investigated the relationship of 20 different kinds of ordinary medicine with the abundance and function of intestinal bacteria and their connection to the severity of chronic diseases, such as heart disease, obesity and type 2 diabetes,” says Professor Oluf Pedersen from the Novo Nordisk Foundation Center for Basic Metabolic Research (CBMR) at the University of Copenhagen. He is the leader of the Danish team of researchers involved in the European research project.

Among the surprising discoveries was evidence that a combination of two commonly used drugs – diuretic tablets (so-called loop diuretics) and blood pressure medication (so-called beta-blockers) – are associated with increased levels of health-promoting bacteria belonging to the bacterial genus Roseburia.

This type of bacterium is able to break down dietary fiber in plant foods and convert them into butyric acid, whose health benefits include lowering inflammation and regulation of the epigenome. That is the dynamic part of our DNA.

People with cardiovascular disease were also more likely to harbor a healthier combination of various gut bacteria if they were also prescribed statins, a common class of drugs that lowers the level of harmful LDL cholesterol in the blood. A particularly interesting finding was that the combination of statins and heart magnyl was associated with  lower levels of harmful fats in the blood.

On the other hand, the scientists also discovered that gastric acid medication, so-called proton pump inhibitors, are linked to adverse changes in the intestinal microbiome.

“In the colon of people who take gastric acid medication, we found relatively high levels of bacteria that are normally only present in the oral cavity. Stomach acid usually  kills bacteria from the oral cavity that try to escape to the gut where they do not belong. But this is not the case when you use these gastric acid inhibitors. The observation we have made is important because the presence of oral bacteria in the colon is associated with an increased risk of developing some types of colon cancer,” says Professor Oluf Pedersen.

Less diverse gut bacteria is linked to the consumption of antibiotics

Not unexpectedly, the researchers found that repeated antibiotic treatments over the past five to ten years is associated with a less diverse gut microbiome. Healthy people tend to have a diverse gut microbiome, whereas the microbiome of people who live with chronic diseases such as obesity, diabetes and cardiovascular disease, tends to be less diverse. This lack of diversity may reduce the capacity of the gut’s ‘chemical factory’ to produce health-promoting molecules.

The research project MetaCardis (Metagenomics in Cardiometabolic Diseases) started in 2012 with a €20 million grant from the EU and European research centers and involved 2173 trial participants in Denmark, Germany and France. Trial participants were either healthy or had common chronic diseases such as atherosclerosis of the heart, type 2 diabetes or obesity.

The researchers behind the MetaCardis project stress that they have only discovered associations between the consumption of common drugs and changes to the gut microbiome. These results do not indicate any causal relationships, which is why future clinical interventions  are needed on humans and animals to explore any potential mechanistic causal relationships between drug intake, gut microbiome and incidence of chronic diseases.