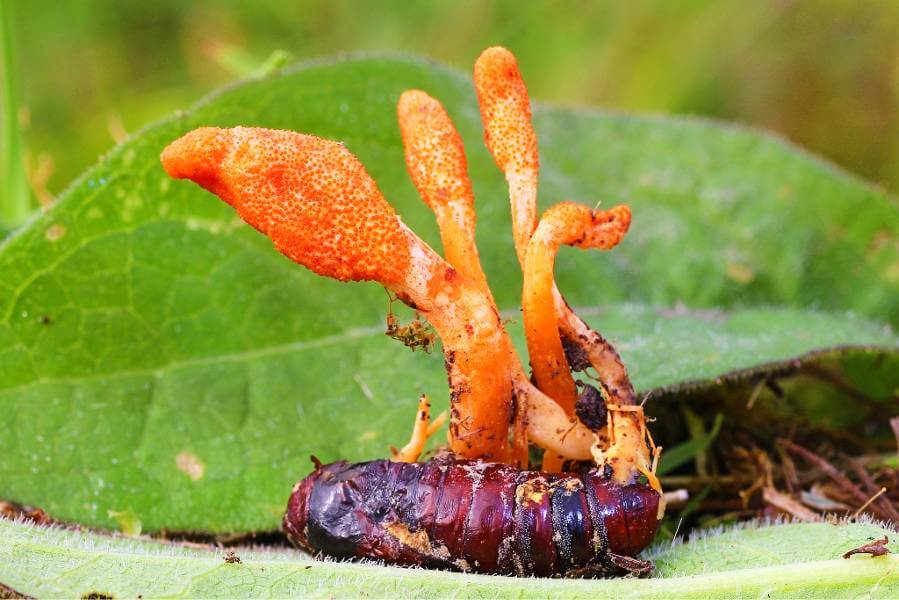 The Cordyceps mushroom is best known for its gruesome eating habits: famously, its spores infect insects and kill them, growing into fully-fledged fruiting bodies that sprout from the insects’ flesh.

But Cordyceps also has significant medicinal potential, containing a bioactive compound cordycepin which could potentially be developed into powerful new antiviral medications and cancer drugs. The mushrooms are rare in the wild, and until now, growing healthy Cordyceps in the lab has been a challenge which impedes scientific research – but Professor Mi Kyeong Lee of Chungbuk National University and her team including Dr Ayman Turk, publishing today in Frontiers in Microbiology, have found a way to grow these elusive fungi in a controlled setting without losing their potency.

“Cordycepin is one of the cytotoxic nucleoside analogs with complementary therapeutic activities in anti-proliferation and anti-metastasis in cancer cells,” said Dr Lee, senior author of the study. “In addition, recent research findings strongly urge preclinical and clinical studies of cordycepin for the comprehensive treatment of Covid-19.”

Usually, Cordyceps is cultivated in the lab on grains such as brown rice. However, scientists noticed that the levels of cordycepin were very low when it was collected from Cordyceps grown on grains and suspected that the protein content of the grains simply wasn’t high enough to feed the Cordyceps. Given the high potential of cordycepin, Lee and her colleagues were keen to find a way to grow healthy, strong Cordyceps in the lab and synthesize high levels of the bioactive compound for medical research. They considered edible insects as an alternative growth medium for Cordyceps, but as different insects offer different nutrients, they also investigated which commercially available edible insects provided their mushrooms with the best meal.

Using crickets, silkworm pupae, mealworms, grasshoppers, white-spotted flower chafer larvae, and Japanese rhinoceros beetles, they cultured Cordyceps for two months and then harvested them to investigate the results. There were striking differences between the different insect foods: the Cordyceps grew largest on mealworms and silkworm pupae, and least well on chafer larvae and grasshoppers. Still, maximum growth didn’t necessarily correlate with the high levels of cordycepin Dr Lee and her team sought. Although they didn’t grow as large, the Cordyceps grown on Japanese rhinoceros beetles produced the highest levels of cordycepin, 34 times more than the levels produced on silkworm pupae, the poorest performers.

Investigation showed that the key to cordycepin production was the fat content of the insect, not protein – specifically, high levels of oleic acid, which may be necessary for cordycepin synthesis. Adding oleic acid to a low-performing insect food improved the production of cordycepin in the Cordyceps grown on it by 50%.

“Our research convincingly shows that a potential strategy for boosting cordycepin production in the growth of Cordyceps would be to use insects with high oleic acid content,” Lee said.

With the therapeutic potential of Cordyceps mushrooms complicated by the difficulty of producing cordycepin in the laboratory, these results offer hope for researchers seeking new medicines to fight devastating illnesses. Knowing what to feed these very hungry Cordyceps means we can harness their power in drug discovery to find the medicines of the future.

“The cultivation method of Cordyceps suggested in this study will enable the production of cordycepin more effectively and economically,” Lee said. “However, securing edible insects is not yet sufficient for scale-up to industrial level. It is also thought that more efficient production may be possible through the use of other insects, which needs to be demonstrated by further study.”