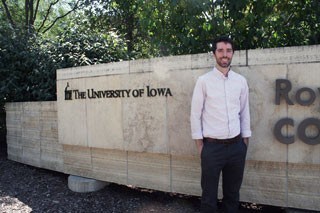 People with hereditary hearing loss must undergo multiple genetic tests for doctors to determine the exact cause. Testing for each possible genetic cause is expensive, time consuming, and often inconclusive.

Shearer, who earned his doctorate in molecular physiology and biophysics in 2012 and will complete requirements for his M.D. in January 2014, helped design and implement a targeted sequence capture platform called OtoSCOPE®. He also established an efficient protocol that enables scientists to reproduce gene sequence samples.

The Graduate College honored Shearer with the inaugural Rex Montgomery Dissertation Prize, which recognizes excellence in doctoral research at the UI in the area of disease prevention and/or the translation of research into clinical practice. The Rex Montgomery Dissertation Prize will be awarded annually in the biomedical and health sciences disciplines.

Montgomery is an emeritus professor of biochemistry in the UI’s Carver College of Medicine (CCOM). He began at the UI as an assistant professor in 1955 and became a full professor in 1963. Montgomery was associate dean for academic affairs in the Carver College of Medicine from 1974 to 1995, while also serving as associate dean of research in the CCOM and interim vice president of research.

Shearer’s dissertation, “Deafness in the Genomics Era” has contributed to a paradigm shift in the care of patients with hearing loss.

“In part due to Eliot’s research contribution, a comprehensive genetic test like OtoSCOPE® is now commonplace,” says Dr.Marlan Hansen, associate professor of otolaryngology (the study of ear, nose, and throat diseases). “This test is now ordered hundreds of times a month to help patients and clinical care providers across Iowa, the United States, and the world.”

Shearer is the UI’s nominee in the biological sciences category for the Council of Graduate Schools/University Microfilms International Distinguished Dissertation Award. Iowa has five national winners, more than any public institution. Thirteen more Iowa nominees have been finalists in the competition.

Deafness in the Genomics Era

Comprehensive clinical genetic testing did not exist when Shearer began graduate study at the UI in 2007. At that time, single-gene testing took three months per gene and cost up to $1,800 per test.

Shearer helped the UI prove the feasibility of comprehensive genetic diagnosis for hearing loss. Shearer and his mentor, Dr. Richard Smith, professor of otolaryngology, led a group of researchers who described the functionality of OtoSCOPE® in a 2010 issue of the Proceedings of the National Academy of Sciences.

This article, which forms the basis of the first chapter of Shearer’s dissertation, has been broadly cited by scientists within and outside the deafness field, according to Smith.

”Instead of going one gene at a time, we wanted to sequence all the deafness genes at once,” says Shearer, whose research was funded by an NIH F30 Predoctoral Fellowship. “In order to do this we needed to isolate the genes known to cause deafness from the rest of the genome with a method called targeted sequence capture. Before using this method for genetic testing, we first needed to validate the platform to make sure that it was approved for clinical testing. We were the first group in the world to create a targeted capture platform for deafness.

“This was all new, so there wasn’t anyone to talk to. That made it more difficult, but also much more fun. We had to make ourselves the experts.”

Shearer and Smith then published two manuscripts in BMC Biotechnology and BMC Genomics describing improvements they had made in the OtoSCOPE® method. These improvements enhance the clinical applicability of OtoSCOPE® by improving efficiency and reproducibility.

Using OtoSCOPE®, doctors can run a comprehensive genetic test for hearing loss in a single test tube, which increases the efficiency and accuracy of the test. The three-day-long test involves isolating the desired section of the genome, washing away the rest of the genome, and sequencing the remaining genes.

“Eliot utilized cutting edge advances in DNA sequencing to simultaneously screen a large number of known deafness-causing genes,” says Michael Anderson, associate professor of molecular physiology and biophysics and member of Shearer’s dissertation review committee. “The work required expertise with both molecular and bioinformatic methodologies, a somewhat rare feat for a graduate student to achieve at his level of expertise.”

In June 2013, Shearer and Smith published the results of the first 100 patients to receive comprehensive genetic testing for hearing loss using OtoSCOPE® in the Journal of Medical Genetics.

Researchers were able to deliver a clear diagnosis in 56 percent of patients with hearing loss caused by recessive genes. The diagnostic rate in the overall population was 44 percent, because fewer dominant genes have been identified as contributors to hearing loss.

Other genetic tests show a diagnostic rate of around 16 percent in the overall population.

A clear and complete genetic profile of the cause of hearing loss can help a patient/doctor team understand the likely progression of hearing loss and predict the effectiveness of specific interventions and therapies.

“This paper highlights the paradigm shift genetic testing is undergoing,” Smith says. “After a medical history, physical examination, and audiogram, genetic testing should be the next test ordered in the clinical evaluation of a deaf/hard-of-hearing person. It saves health care dollars and is the foundation on which personalized genomic medicine for hearing loss is being built.”

Shearer attributes much of his success as a scientist to his mentor.

“Dr. Smith gives you enough freedom to do what you want, but he will help you when you need help,” Shearer says. “He’s like a super hero. He does more in a day than anyone could do in a week. The biggest thing I’ve learned from him is to be kind and caring about everything. He always has the person in mind when we do research.

“The goal of his research is to improve people’s lives. He told me when you’re doing clinical medicine you can impact people on a day-to-day basis, but doing research and changing science is how you can impact millions of people.”

Shearer is preparing to follow in Smith’s footsteps, having made significant progress toward establishing a distinguished career as a head and neck surgeon and researcher.

“What started as a curiosity has developed into a full-blown passion for translational science,” Smith says. “(Shearer) has learned how he can help patients not only directly through clinical work, but through the far more reaching effects of scientific advancement.”