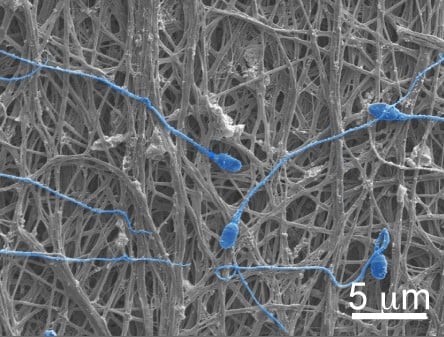 The electrospun fibers can release chemicals or they can physically block sperm, as shown here.

A Montana State University researcher and her co-researchers are receiving international attention for showing that skin cells from infertile men can be used to create the precursors of sperm – research that holds promise for treating male infertility.

The teams’ work published on May 1 in Cell Reports has been reported on by England’s Guardian, Telegraph, and Independent newspapers as well as National Public Radio and many U.S. science news outlets.

The team took skin cells from men who suffer from a genetic disorder, known as azoospermia, which prevents them from producing sperm. Those skin cells were then turned into stem cells, specifically, induced pluripotent stem cells, or iPSC. Like other stem cells, iPSC have the ability to become any other type of cell.

The team then implanted the stem cells into the testes of mice where they produced the precursors to sperm. It was the first time such work has ever been done.

The research was carried out at Stanford University, but the paper was written at Montana State University by senior author Renee Reijo Pera, MSU’s new vice president for research. Reijo Pera came to MSU in January from Stanford where she had been director of Stanford University’s Center for Human Pluripotent Stem Cell Research and Education and the Center for Reproductive and Stem Cell Biology. She is regarded as one of the world authorities on embryonic stem cells.

The success of the stem cells in forming the precursors to sperm in the mice offer scientists a new way to study the causes of, and possible treatments for, male infertility. The findings hold promise that one day infertile men could have their own cells implanted in their testes as a treatment for infertility. Reijo Pera and the paper’s other authors caution that such a treatment would require much further research before being clinically viable.

“Infertility is remarkably common, affecting 10 to 15 percent of couples,” Reijo Pera said. “And the genetic causes of infertility are surprisingly prevalent among men. So progress in this area could potentially help thousands, if not millions, of couples around the world.”

Another implication of the paper is the possibility of using cells from endangered species to help boost their reproduction.

Contributing to the paper with Reijo Pera were Cyril Ramathal, lead author, Jens Durruthy-Durruthy and Joy Arakaki with the Institute for Stem Cell Biology & Regenerative Medicine, Departments of Genetics and Obstetrics and Gynecology at Stanford University; Meena Sukhwani and Kyle Orwing of the Magee Women’s Research Institute at the University of Pittsburgh; and Paul Turek, of the Turek Clinic in San Francisco.