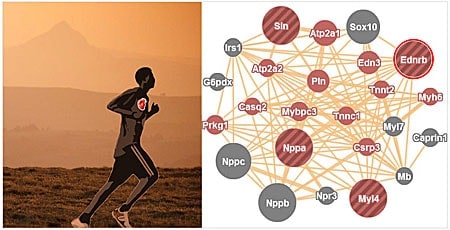 ​Ethiopians have lived at high altitudes for thousands of years, providing a natural experiment for studying human adaptations to low oxygen, a condition known as hypoxia. One factor that may enable Ethiopians to tolerate high altitudes and hypoxia is the endothelin receptor type B (EDNRB) gene. Researchers at University of California, San Diego School of Medicine now find that mice with lower-than-normal levels of EDNRB protein are remarkably tolerant to hypoxia. The study, published this week by the Proceedings of the National Academy of Sciences, provides a mechanism for the gene’s role in adaptation to life at high altitudes and suggests that EDNRB could be targeted to treat sea level diseases that stem from lack of oxygen.

“This is the first demonstration that a gene involved in high altitude adaptation is critical in protecting cardiac function in moderate to severe hypoxia at sea level,” said senior author Gabriel Haddad, MD, Distinguished Professor and chair of the Department of Pediatrics at UC San Diego School of Medicine and physician-in-chief and chief scientific officer at Rady Children’s Hospital-San Diego. “In addition to improving the health of the more than 140 million people living above 8,000 feet, information on how Ethiopians have adapted to high altitude life might help us develop new and better therapies for low oxygen-related diseases at sea level — heart attack and stroke, for example.”

Whole-genome sequencing previously identified EDNRB as a candidate gene for high altitude tolerance in Ethiopians. To investigate further, Haddad and his team turned to a mouse model that produces low levels of the protein.

The researchers found that even under extremely hypoxic conditions — five percent oxygen, even lower than you’d find atop Mount Everest — low-EDNRB mice performed much better than normal mice. Under these conditions, normal mice experienced a 40-50 percent drop in cardiac output, which meant they were unable to maintain their blood pressure and none of them survived to finish the minimum exposure time. In contrast, mice with low EDNRB maintained normal heart rhythm and blood pressure in severe hypoxia. Low-EDNRB mice in hypoxia were also better able to maintain oxygen delivery to vital organs and keep blood lactate levels low.

“Lowering EDNRB does wonders for mice when environmental oxygen levels are low, leading us to conclude that the EDNRB gene plays a key role in human adaptation to low oxygen and high altitude,” said Haddad, who is also a pediatric pulmonologist at Rady Children’s Hospital-San Diego.

The protein encoded by the EDNRB gene is thought to help blood vessels dilate and help cells proliferate during development. In this study, Haddad’s team found that three heart-specific genes (Nppa, Sln and Myl4) differ in expression levels in the low-EDNRB mice, as compared to normal mice, meaning they are likely regulated by EDNRB. These downstream genes help heart cells perform crucial functions such as transport calcium and contract. The finding provides a direct molecular link between EDNRB levels and cardiovascular performance.

Haddad and his team are now testing therapeutic drugs that inhibit ENDRB.

“The idea that reducing the expression of functional EDNRB to help cells and tissues endure extreme hypoxia is appealing and may lead to novel therapies for cardiac failure in the near future,” said Tsering Stobdan, PhD, assistant project scientist in Haddad’s lab and first author of the study.