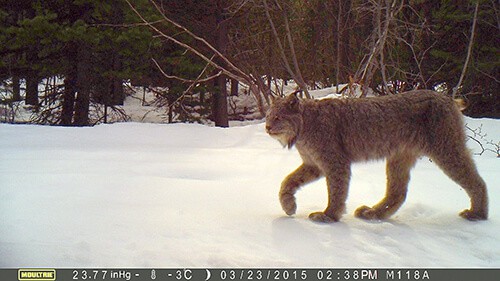 Deep in the forests of Washington’s Kettle Mountains, Washington State University wildlife biologist Daniel Thornton searches for signs of a rare and elusive type of wild cat — the lynx.

An assistant professor in the School of Environmental Science, Thornton and environmental science graduate students Travis King and Arthur Scully are helping to lead the largest lynx camera survey ever done in the state this June-October.

The goal of the multiyear research project is to understand the distribution and abundance of Washington’s lynx in order to develop an informed plan for their conservation and recovery. The project is sponsored by the Washington State Department of Natural Resources, Washington State Fish and Wildlife, Conservation Northwest, Osprey Insights, Seattle City Light and the U.S. Forest Service,

“We are trying to keep an iconic western species here on the landscape and in order to do that we need some basic information about where they are and how the population is doing,” Thornton said.

Where the wild things are

Known for the tufts of pointy black hair on the tips of their ears, lynx once roamed across Eastern Washington from the Cascades in the west to the Kettles and Selkirks in the east. During the twentieth century, habitat loss and harvesting brought the U.S. population of lynx to the brink of extinction until they received federal protection in the 1980s.

Today, the lynx is considered threatened under the Endangered Species Act and is state-listed as endangered, but scientists are unsure of their exact numbers and distribution in Washington, one of only a few states in the lower 48 where the big cats currently reside.

To address this challenge, Thornton, King, Scully and their colleagues started monitoring mountainous areas of the state, traditionally known to be lynx habitat, with an expansive network of remote cameras in 2015.

Last summer, Scully and King entered the field to check the remote cameras they had set up in the Kettles and discovered four images of a lynx walking by in the middle of the night. It was the first time scientists had photographic evidence of a lynx in the Kettles in nearly two decades. The cameras also captured photos of lynx in the Okanogan-Wenatchee National Forest north of Lake Chelan, an area where researchers did not expect to find them.

“The Kettle River Range and southern regions of the Okanogan Forest were historically important regions for lynx, but they have not recovered from population declines,” Thornton said. “The images we captured are significant because they give us definitive information that lynx remain active in these areas and they will help guide our future camera trapping efforts.”

Starting in June, the WSU researchers and their collaborators will return to the Kettle River Range and Eastern Cascades to set up remote cameras. The wildlife biologists plan to set out 400 motion-activated cameras capable of recording months’ worth of footage.

They hope the data the cameras gather can be used to create detailed lynx distribution maps to inform future conservation efforts and help reestablish connections between populations in Washington and Canada.

The researchers would eventually like to develop the cameras into a sophisticated year-around monitoring network that could help monitor the health of Washington’s lynx population over time.

“There are definitely healthier populations of lynx in Canada and a key conservation initiative will be maintaining the corridors the cats use to move across the border from one habitat to another,” Thornton said. “Our goal is to gather enough photographic evidence of the state’s lynx populations to inform initiatives, funding, and programs to protect lynx in Washington in the future.”