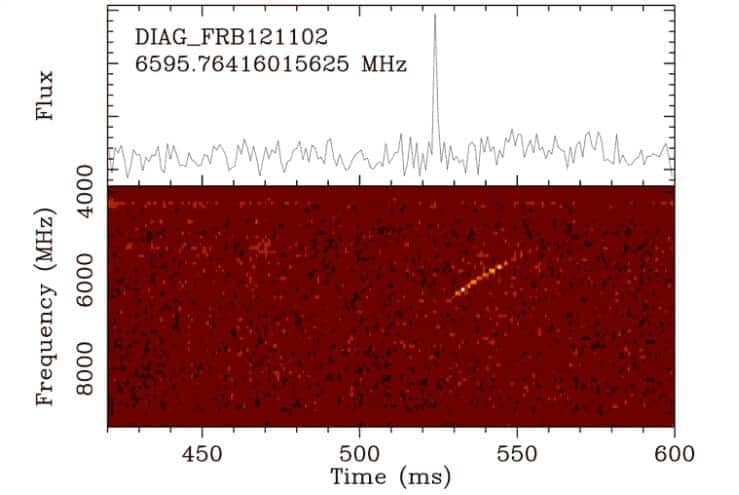 Breakthrough Listen, an initiative to find signs of intelligent life in the universe, has detected 15 brief but powerful radio pulses emanating from a mysterious and repeating source – FRB 121102 – far across the universe.

Fast radio bursts are brief, bright pulses of radio emission from distant but largely unknown sources, and FRB 121102 is the only one known to repeat: more than 150 high-energy bursts have been observed coming from the object, which was identified last year as a dwarf galaxy about 3 billion light years from Earth.

“Bursts from this source have never been seen at this high a frequency,” said Andrew Siemion, director of the Berkeley SETI Research Center and of the Breakthrough Listen program.

As astronomers around the globe try to understand the mechanism generating fast radio bursts, they have repeatedly turned their radio telescopes on FRB 121102. Siemion and his team alerted the astronomical community to the high-frequency activity via an Astronomer’s Telegram on Monday evening, Aug. 28.

“As well as confirming that the source is in a newly active state, the high resolution of the data obtained by the Listen instrument will allow measurement of the properties of these mysterious bursts at a higher precision than ever possible before,” said Breakthrough Listen postdoctoral researcher Vishal Gajjar, who discovered the increased activity.

First detected with the Parkes Telescope in Australia, fast radio bursts have now been seen by several radio telescopes around the world. FRB 121102 was discovered on Nov. 2, 2012, (hence its name) and in 2015 it was the first fast radio burst seen to repeat, ruling out theories of bursts’ origins that involved the catastrophic destruction of the progenitor, at least in this instance.

Regardless of FRB 121102’s ultimate source, when the recently detected pulses left their host galaxy, our solar system was less than 2 billion years old, noted Steve Croft, a Breakthrough Listen astronomer at UC Berkeley. Life on Earth consisted only of single-celled organisms; it would be another billion years before even the simplest multi-cellular life began to evolve.

As part of Breakthrough Listen’s program to observe nearby stars and galaxies for signatures of extraterrestrial technology, the project science team at UC Berkeley added FRB 121102 to its list of targets. In the early hours of Saturday, Aug. 26, Gajjar observed that area of the sky using the Breakthrough Listen backend instrument at the Green Bank Telescope in West Virginia.

The instrument accumulated 400 terabytes (a million million bytes) of data over a five-hour period, observing across the entire 4 to 8 GHz frequency band. This large dataset was searched for signatures of short pulses from the source over a broad range of frequencies, with a characteristic dispersion, or delay as a function of frequency, caused by the presence of gas in space between Earth and the source. The distinctive shape that the dispersion imposes on the initial pulse is an indicator of the amount of material between us and the source, and hence an indicator of the distance to the host galaxy.

Analysis by Gajjar and the Breakthrough Listen team revealed 15 new pulses from FRB 121102. The observations show for the first time that fast radio bursts emit at higher frequencies than previously observed, with the brightest emission occurring at around 7 GHz.

“The extraordinary capabilities of the backend receiver, which is able to record several gigahertz of bandwidth at a time, split into billions of individual channels, enable a new view of the frequency spectrum of FRBs, and should shed additional light on the processes giving rise to FRB emission.” Gajjar said.

“Whether or not fast radio bursts turn out to be signatures of extraterrestrial technology, Breakthrough Listen is helping to push the frontiers of a new and rapidly growing area of our understanding of the universe around us,” Siemion said.